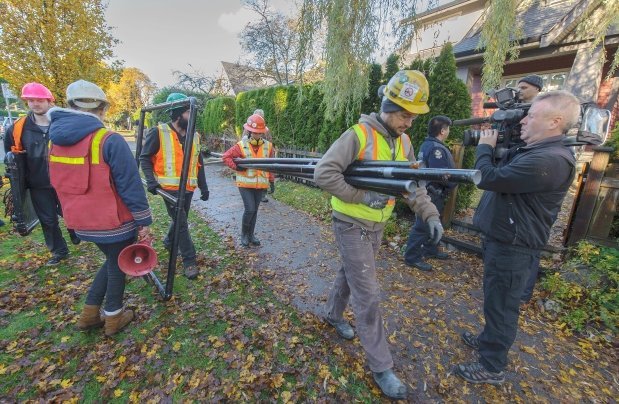 Fracking protest aside, the major fissure on controversial issue is within the NDP

VICTORIA ­ As political protests go, the anti-fracking display at Premier Christy Clark’s house on the weekend was small-scale and short-lived. A dozen or so protesters put up a mock drill rig on her front lawn on Sunday morning and removed it soon afterward when asked to do so by police. Still, the episode had larger implications for both of B.C.’s major political parties. For the B.C. Liberals, the ill-advised trespass on the premier’s home turf generated sympathy more than any backlash over the widespread use of fracking to unlock the province’s natural gas reserves. The New Democrats kept a healthy distance from Sunday’s bit of grandstanding by the anti-fracking protesters. Still the episode served as a reminder of the NDP’s own internal divisions on fracking, that may well resurface in the coming leadership race. Fracking is the practice of injecting water at high pressure to fracture shale deposits deep in the earth and release the natural gas within. It is also essential to any hope of developing the resource for export in liquefied form in the future. New Democrats have supported the development of a liquefied natural gas industry as a route to sustaining provincial revenues from the resource, already under siege from a glut in North America…more