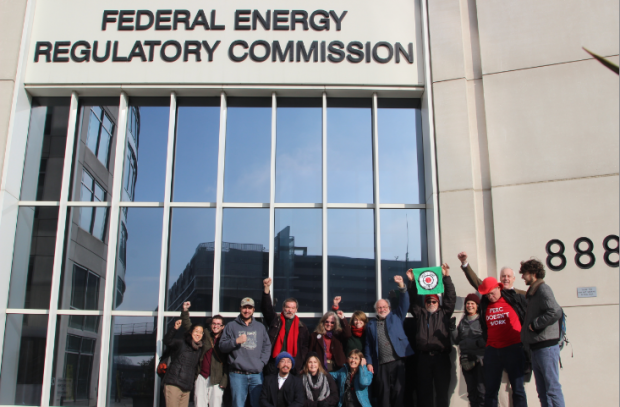 After all of the commissioners and attendees were seated, following industry representatives and other officials patting each other on the backs and acknowledging the relationships that FERC’s commissioners have enjoyed with profit-obsessed corporate entities for many uncontested decades, members of BXE rose together to stand among the audience.

Kendall Hale of North Carolina requested and was ‘permitted’ (pun intended) to deliver a rousing 5-minute speech to the FERC Commission meeting —  this included the commissioners, a press table where a people’s media reporter Elias Weston-Farber was seated with other local journalists, and a room full of others in what had been considered a public meeting.  There was a person actively videotaping the proceedings throughout our time in the meeting room.

“As the governmental regulation and permitting agency for much fossil fuel infrastructure, FERC has become the facilitator, enabler, and rubber stamp for this process.  FERC not only doesn’t work, but FERC’s permitting sometimes kills communities and the people who live there” as disease and death follow these invasive, destructive processes of extraction, processing, transport, and storage.  FERC has more influence and power than any other agency to create a new system that truly upholds their own published mission goal to “promote the development of safe, reliable and efficient energy.

As Hale mentioned in her speech, and as non-industry funded studies are revealing, safety, reliability, and efficiency are impossible goals when relegating our nation to the limitations and ecological detriments of dirty, costly, dwindling fossil fuels.

In addition to being the “coward’s journey” of existence, Hale reminded them that it is also a most foolish way of perpetuating a globally-declining fossil fuel economy.  Analysts may be placing bets as to whether we will reach “peak gas” before the shale industry bubble itself bursts.  In either case, “our economy could be seriously affected” due to the dangerous extreme energy dependency to which we have allowed ourselves to succumb.  She further recommended that “other renewable energies, particularly solar, are emerging as realistic, much healthier alternatives to fossil fuels.”

Commissioner Chairwoman Cheryl LaFleur, in response to Hale’s compelling statement, assured those in attendance that ‘they’ were well aware of the Beyond Extreme Energy people’s coalition.  Otherwise, there was no further comment beyond this acknowledgment.

When the Chairwoman’s gavel fell and the meeting officially called to order, a long-time Pennsylvania fracking activist, Alex Lotorto, stood and kindly requested to speak following Hale, but was silenced by Chairwoman LaFleur and he returned to his seat.  Though efforts to unfurl and hold a cloth banner were thwarted by aggressive security guards during Lotorto’s speaking attempt, it actually seemed to create a moment of anti-climax wherein most meeting attendees and commissioners smugly considered the action to have been quelled.

At this time, reporter Elias Weston-Farber nearly had his camera confiscated and he was asked to leave.  Even after an audience member pointed out that the female videographer covering the meeting was not being asked to cease filming, Weston-Farber was forcibly shoved from the meeting room by a security guard.

The dismissal of free press as well as a limitation on speech helped to spark the pre-planned ongoing cascade of “popcorn-style” speeches of 10 BXE coalition members hailing from many states including Iowa, Virginia, North Carolina, Maryland, New York, Minnesota, and Pennsylvania.  Issues varied from pipelines & compressor stations to storage facilities & LNG export terminals.  Additional speeches highlighted parallel types of permitting processes that other agencies, governors, utilities boards, and politicians use to deceptively obscure and railroad fossil fuel infrastructure through backyards and playgrounds throughout our continent for the profit of the few and the exploitation of the most vulnerable.

During this spontaneous oratory process, the January 2015 FERC Commission Meeting held an unscheduled recess and the commissioners filed out of the room while speeches were still being given.  Each citizen speaker was eventually escorted out of the building by security.  A member of the audience who remained mentioned that LaFleur had said that the fracking and climate change protest that disrupted the meeting was “new territory” for FERC.  In-audience journalist Hannah Northey reports LaFleur as saying: “to the extent that our meetings are attracting the volume and intensity of protests we’re getting, we’ll have to step back and think about how to deal with it,” LaFleur said.

“Dealing with it” should be directed to the glaring concerns that the irresponsible FERC rubber-stamping policy of permitting ill-advised infrastructure projects and non-renewable energy systems ignores; not a focus on a new strategy for “protester-management.”   Demands have been increasingly well messaged, ad nauseum, by nationwide communities of non-activists and activists alike through a bureaucratic, FERC-required complaint collection system and legislation that have demonstrated clearly that these communities will continue to be unheard, underrepresented, and harmed.  The protests will only continue as more people are reminded that it is up to us to demand and take back the justice that honours our natural world and each other.  There will be more creative non-violent steps to change the power dynamic of these conversations and the only fantasy is that these desired shifts are impossible.

Our actions are peaceful, coordinated, and, as is the case for the growing movement in our country, the result of too many years of everyday people not simply being misheard, but being overtly ignored by elected officials and various colluded private business entities.  As simple as this action was, based on the scowls and anger in the faces and eyes of the leaders of this up-until-now uninterrupted process of eminent-domaining, pipelining, drilling, and fracking us into a world of climate chaos, devoid of clean water, unfouled air, and empowered local communities with sovereign, immutable rights, we are having an effect.