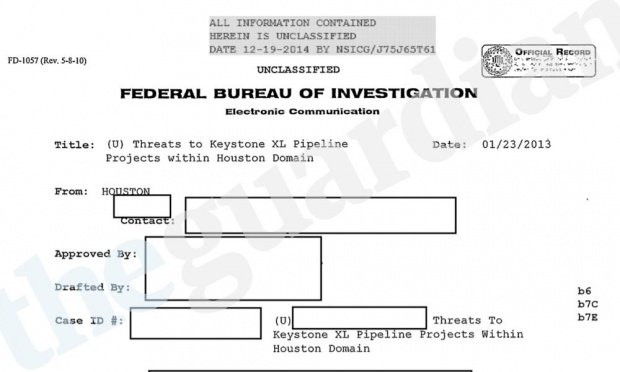 FBI violated its own rules while spying on KXL opponents

Paul Lewis and Adam Federman |  The Guardian  | May 12, 2015
Share
FacebookTwitterEmail

The FBI breached its own internal rules when it spied on campaigners against the Keystone XL pipeline, failing to get approval before it cultivated informants and opened files on individuals protesting against the construction of the pipeline in Texas, documents reveal.

Internal agency documents show for the first time how FBI agents have been closely monitoring anti-Keystone activists, in violation of guidelines designed to prevent the agency from becoming unduly involved in sensitive political issues.

The hugely contentious Keystone XL pipeline, which is awaiting approval from the Obama administration, would transport tar sands oil from Canada to the Texas Gulf coast.

It has been strongly opposed for years by a coalition of environmental groups, including some involved in nonviolent civil disobedience who have been monitored by federal law enforcement agencies.

The documents reveal that one FBI investigation, run from its Houston field office, amounted to “substantial non-compliance” of Department of Justice rules that govern how the agency should handle sensitive matters.

One FBI memo, which set out the rationale for investigating campaigners in the Houston area, touted the economic advantages of the pipeline while labelling its opponents “environmental extremists”.

“Many of these extremists believe the debates over pollution, protection of wildlife, safety, and property rights have been overshadowed by the promise of jobs and cheaper oil prices,” the FBI document states. “The Keystone pipeline, as part of the oil and natural gas industry, is vital to the security and economy of the United States.”

The documents are among more than 80 pages of previously confidential FBI files obtained by the Guardian and Earth Island Journal after a request under the Freedom of Information Act.