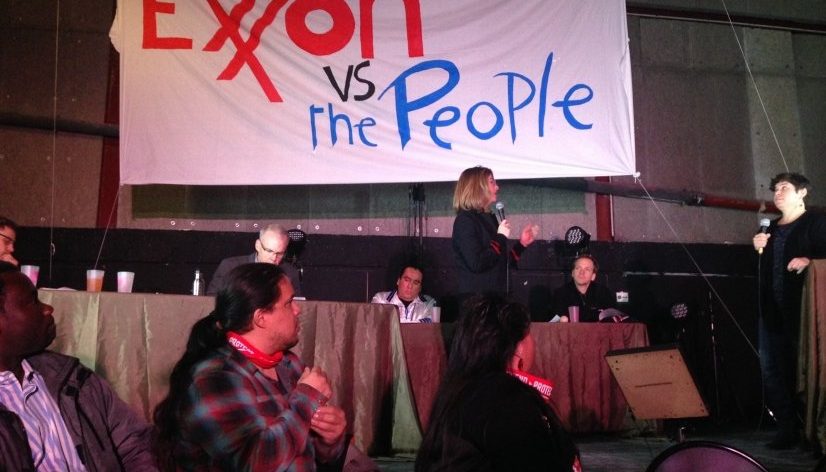 Exxon under pressure in mock trial in Paris

These are just some of the charges leveled against ExxonMobil at a mock trial that took place in Paris, Saturday to coincide with the ongoing international climate negotiations at COP21.

The trial, held in Paris, alleged Exxon’s work at funding climate science had put the planet, people’s health and communities from Texas to Nigeria at risk.

The trial was hosted by Canadian author Naomi Klein and climate change activist and author Bill McKibben and brought together key witnesses to discuss Exxon’s role in confusing the public about the dangers of human-caused climate change.

Two investigations by the LA Times and Inside Climate News revealed Exxon scientists warned the company about the impacts of burning fossil fuels in the 1970s.

But the trial heard how scientists were directed to keep that information secret from shareholders and the public.

Since the 70s Exxon was involved in trade organizations, think tanks and lobbying organizations that have misled the public about greenhouse gases, climate change and climate science.

The trial, titled Exxon vs. The People, was presided over by three judges including indigenous rights and 350.org campaigner Clayton Thomas-Muller, actor Peter Sarsgaard and Milañ Loeak, daughter of Christopher Loeak, president of the Marshall Islands.

Cindy Baxter, a lead witness and curator of the website Exxon Secrets, took the stand to testify how Exxon funded organizations that have cast doubt on climate science, including the Competitive Enterprise Institute and the Committee for a Constructive Tomorrow.

Both organizations are represented in Paris and aim to cast doubt on climate science and the ‘global warming hype’ at the COP21 climate negotiations.

Texas environmental justice advocate Bryan Parras, born in 1977, told the trial a subsidiary of Exxon caused severe impacts on human and environmental health in the state where his community lives.

“Did it surprise you that Exxon has been studying climate change for you entire life?” Klein asked.

Perras responded: “Did anyone expect that they didn’t know or wouldn’t hide it?”

“I honestly don’t trust anything these companies say. We should cast seeds of doubt on their campaigns and in their markets.”

Parras said Exxon’s deception made him angry, adding: “What else did they know and what else are they saying? What did they know about toxicity and cancers? Why did it take us so long to get that information?”

She said: “Exxon is the world’s largest public natural gas producer and it extracts oil and gas via fracking all over the world, particularly in the U.S. but also more recently in Argentina.”

Steingraber replied that natural gas was a “catastrophe” for the climate and that Exxon had also pushed the idea that gas was climate friendly.

Steingraber is a member of Center for Health Professionals in New York, a group of scientists, physicians, nurses providing watchdog evidence on the harms and risks of fracking since 2012.  She said a review of more than 500 studies found fracking was a risk to human health.

“The climate crisis is a parenting crisis which means it’s a human rights crisis,” Steingraber said.

“For Exxon to be involved in a misinformation about the science of climate is a strike against parenthood, against human knowledge and scientific progress.”

“Africa is sometimes described as a continent suffering from the effects of climate change. Have you seen these effects?” McKibben asked Henshaw.

“In the Niger Delta where I lived in 2012 there was massive flooding. Houses were completely submerged. An entire planting season was lost,” Henshaw said.

McKibben asked: “Rex Tillerson, the CEO of Exxon, said if climate change happened to cause any inclement weather, we would find technological ways to adapt to that. Have people figured that out in Nigeria?”

“No,” Henshaw responded. “When the 2012 floods happened, the oil companies announced we should move to higher ground. What higher ground? To whose houses?”

Antonia Juhasz, journalist and energy analyst, testified to the quality of the reporting done around the revelations

In her closing argument, Klein addressed the trial’s judges.

“It is Exxon’s crime that it believes money trumps life,” Klein said.

“There is no price that can be placed on the Marshall Islands, on Arctic cultures, on our lives and what we pass on to our children. But we have a duty to seek justice.”

Judge Thomas-Muller said:“Given that as a court we lack ability to compel testimony of xon, we are unable to reach conclusion of guilt or innocence.”x

“We can ask that other courts in other jurisdictions that have the power to summon Exxon do so with haste.“

“We judge that this will represent one of and perhaps the biggest examples of corporate crime in history.”

Fellow judge Loeak said she knew the efforts of the world’s negotiators can be hampered by the denial and deception of the world’s major fossil fuel companies.

“Had Exxon merely stated 25 years ago what they knew —that climate change was real, perilous and required decision action — extraordinary damage could have been avoided.”

Actor Sarsgaard ended the trial on this note: “The burden of proof now rests squarely with this corporation that these documents don’t demonstrate what they seem prima facie to demonstrate: a profound disregard for this planet and its people.”