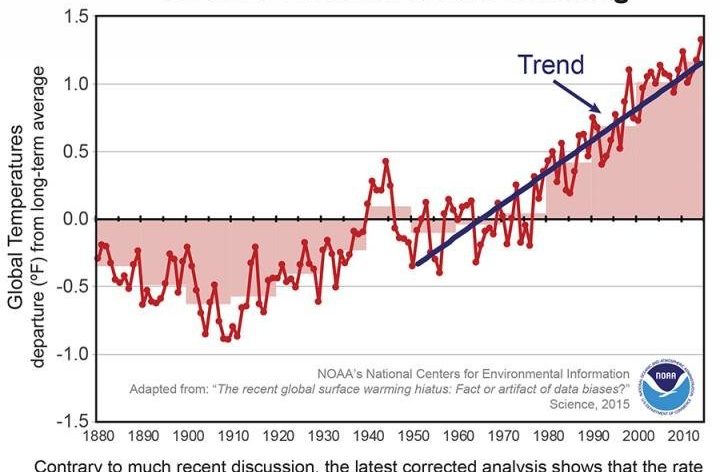 Evidence against a global warming hiatus?

The new analysis suggests no discernable decrease in the rate of warming between the second half of the 20th century, a period marked by humanmade warming, and the first fifteen years of the 21st century, a period dubbed a global warming “hiatus.” Numerous studies have been done to explain the possible causes of the apparent hiatus.

Here, Karl and colleagues focused on aspects of the hiatus influenced by biases from temperature observation networks, which are always changing. Using updated and corrected temperature observations taken at thousands of weather observing stations over land and as many commercial ships and buoys at sea, the researchers show that temperatures in the 21st century did not plateau, as thought.

Instead, the rate of warming during the first fifteen years of the 21st century is at least as great as that in the last half of the 20th century, suggesting warming is continuing apace.

According to these and other results, the authors suggest the warming slowdown was an illusion, an artifact of earlier analyses.

The above story is based on materials provided by American Association for the Advancement of Science. Note: Materials may be edited for content and length.