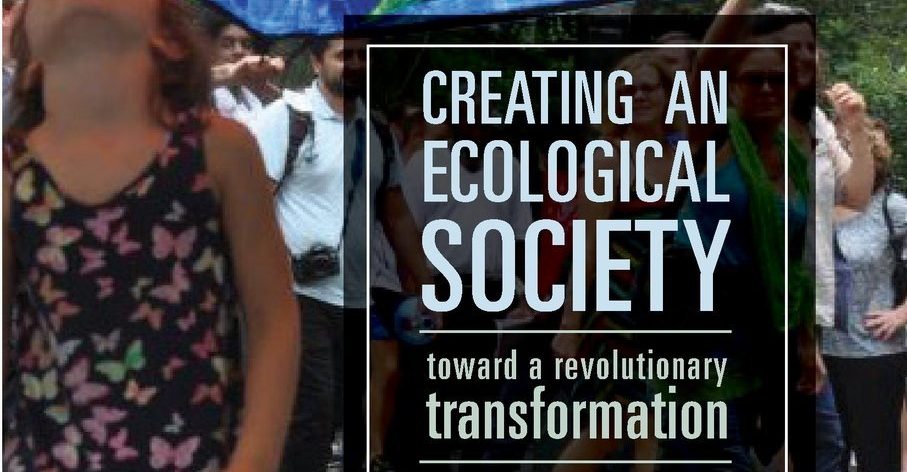 “In order to replace capitalism with an ecological society we need a revolution.” That modest sentence is how Fred Magdoff and Chris Williams, the authors of Creating an Ecological Society: Toward a Revolutionary Transformation, begin the last chapter of their new book. Although the chapter is the end of the book, it is also an opening to a new direction, a new movement. It is also the essence of the entire text.

Capitalism is the reason our biosphere is collapsing and the only way humanity and the rest of earth’s species can survive is by ending capitalism. Given that capitalism and those who profit most from it have proven time and time again that not only are they unwilling to give up the rapacious economy that is destroying earth, but that they even refuse to admit that it is that system which is the cause, the only solution is revolution.

This text is written by two environmental activists (and teachers) with credentials that more than back up the science they explain in this book. Indeed, it is their understanding of the science involved when discussing the ecological crisis we face that has helped inform their Marxist politics. Both Magdoff, author most recently of What Every Environmentalist Needs to Know About Capitalism (with John Bellamy Foster) and a Plant and Soil scientist who taught for decades at the University of Vermont, and Williams, who teaches secondary school and wrote Ecology and Socialism: Solutions to Capitalist Ecological Crisis, patiently present empirical and anecdotal evidence to shore up their argument that the ever-intensifying pursuit of profit that capitalism needs to survive is a death knell for the planet. That is, unless there is radical change that ends that pursuit.

But what about human nature? Aren’t we wired to compete and control? Don’t we want to have a lot of material goods? Just as they take on other questions that would seem to prevent the revolution so urgently needed, the authors answer these questions about human nature with data and patience. In essence, they convincingly argue that empathy and cooperation are not only other aspects of human nature, but are historically greater than the desire to compete and dominate. Specifically, Magdoff and Williams argue it is the human tendency to cooperate which has helped humanity to survive over the millennia; this is clear in how tasks were divided before capitalism came into being and in how even today, humans work together in times of disaster. Continuing this explanation, it is pointed out that capitalism encourages competition, consumption and individualism because that is what makes capitalism thrive. In turn, this is why those aspects of human nature seem to be the only ones.

Each chapter of the text opens with a quote. Many of those quotes are from Friedrich Engels and emphasize the fact that humanity is not above nor separate from nature but a part of it. Once one accepts this consciousness, argue Magdoff and Williams, the idea that what happens to the plants and animals in our world matters as much as what happens to humans becomes considerably easier. If we accept this consciousness, then the need for a society that sustains that life–an ecological society–becomes not just apparent, but necessary.

As I write this, F-16 fighter jets from a local Air National Guard base are flying over my residence, practicing bombing runs like they do so many days here in northern Vermont. The ungodly noise they make is but the least of their faults. Being built for nothing but war, these planes represent in more ways than one can count exactly what the authors of Creating an Ecological Society are writing about–a dependence on fossil fuels sold for profit and controlled by war and the threat of war. Each plane costs millions of dollars and runs on very expensive fossil fuel extracts. Besides the pollutants these training runs leave in the air above my house, the death and environmental destruction they wreak upon those in countries the flight crews are sent to attack is immeasurable and not easily reversible. As Magdoff and Williams point out numerous times in their text, the US military is not only the world’s biggest consumer of fossil fuels, it is also one of the world’s largest polluters. I mention this to emphasize the point that any true environmental movement must by necessity also be an antiwar and anti-imperialist movement. Creating an Ecological Society also makes it clear that this movement must by nature be anti-racist and anti-sexist. After all, it is often women and people of color who are among the most affected by the environmental damage of capitalism.

This book is a serious examination of the ever more serious problem humanity is facing while it destroys the biosphere. It is also a convincing argument for a socialist solution to that problem. While providing a detailed and understandable analysis of the science that proves the ecological crisis we find ourselves in, Creating an Ecological Society also breaks down the essentially suicidal nature of the political economy of capitalism. The authors make it clear that the time for apathy is over, as is the pretense that the cure for capitalism’s deadly excesses can be found in capitalism itself. While reforms undertaken with the understanding that they are a potential beginning of a livable world and not the solution can help us continue, the message inside these covers is that humanity cannot survive if it allows those whose existence is determined by pursuing profit to determine our future–if we want that future to be a livable one for all species, including homo sapiens.

Ron Jacobs is the author of Daydream Sunset: Sixties Counterculture in the Seventies published by CounterPunch Books. His latest offering is a pamphlet titled Capitalism: Is the Problem.  He lives in Vermont. He can be reached at: ronj1955@gmail.com.