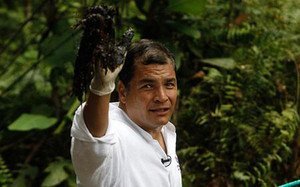 The huge multinational US oil corporation Texaco operated in Ecuador from 1964 until 1992 (Texaco merged with Chevron in 2001).

The corporation poured 72 billion litres of oil waste and 45 million litres of crude oil over 2 million hectares of land in Santa Elena province — land which included the Amazon rainforest, rivers and agricultural land.

Texaco just poured the oil into ground-connected pipes which just poured oil directly into the rivers and forests.

It is one of the worst ecological disasters in history — 30 times greater than the 1989 Exxon Valdez oil spill in Alaska and 85 times greater than the Gulf of Mexico spill by British Petroleum (BP) in 2010. During the supposed clean up in the provinces of Sucumbios and Orellana, before it left Ecuador, Texaco hid over a thousand different swamps of toxic waste throughout the rainforests, dumping a layer of topsoil over them.

Recently, Ecuadoran President Rafael Correa put his hand into one of these hidden pools and brought it out covered in oil muck. Toxic waste is still polluting the groundwater, the rainforest and the atmosphere.

Ecuadoran lawyer Pablo Fajardo explained the legal battle the Ecuador has been fighting for 21 years to the Latin American Social Forum in Sydney on February 7 by Skype.

Another Ecuadorian lawyer, Maria del Mar Gallegos, spoke to Gren Left Weekly about the details of the case against Chevron-Texaco.

What is particularly galling to Ecuadorans is that the corporation could not have legally carried out this degree of contamination in the US. During this same time, Texaco had patented a technology that significantly diminished pollution from oil and gas operations but in Ecuador, Texaco never used it, in order to obtain as much profit as possible.

The company even told the villagers that the oil-contaminated water would make them stronger, that the water was rich in vitamins and minerals. There are over 2000 deaths from cancer, many of them children, related to the oil waste in the rivers. The ratio of cancers in the rural area compared with the urban areas is 3 to 1.

The tribal groups living in the forests used the contaminated water for drinking, to grow food and for washing. They had no other source of water.

Chevron burnt toxic gas, producing huge flames, day and night, during these four decades. Two of the Amazon tribes, the Tetetes and the Sansahuari, have disappeared. Two other tribes, the Cofarestiona and the Siekope, had to migrate away from their land. The rainforest in Ecuador is now called the Amazon Chernobyl.

In 1964, the military dictatorship of Ecuador awarded Texaco-Gulf Consortium a 40-year contract on 1.5 billion hectares of Amazon rainforest, inhabited by indigenous communities. The ownership of the land and the oil wells is complicated but very often the oil companies disrespected the contract and did not pay full royalties and taxes to the Ecuadorian government.

In 1993, the local people organised in the Amazon Defence Coalition to demand restoration of the environment and compensation to the people and communities. The government of US puppet Jamil Mahuad signed an agreement in 1998 releasing Texaco from any claims from the Ecuadorian government.

Texaco thought it was off the hook, but this agreement did not release the oil company from its obligations to the people of Ecuador. The Amazon Defence Coalition, not the Ecuadoran government, sued Chevron-Texaco.

In a ten year court battle in New York Chevron-Texaco insisted that the case be transferred to a court in Ecuador. In 2002, the US courts approved the transfer and the company undertook to respect the decisions of the Ecuadoran courts.

Chevron-Texaco thought it was onto a winner. Ecuadoran judges could be easily bribed and it would get a favourable judgment.

In 2003, the Amazon Defence Coalition, representing 30,000 indigenous people, again sued Chevron-Texaco through the Ecuadoran courts. Chevron-Texaco certainly did not foresee the radical change taking place in 2006 in Ecuador with the election of Rafael Correa.
…more