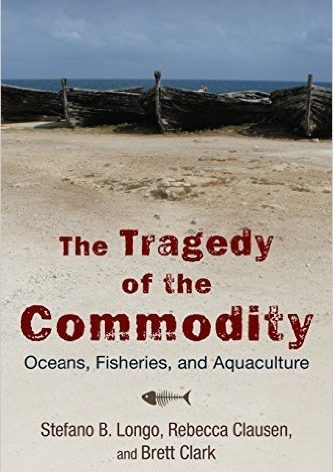 Ecological crisis and the tragedy of the commodity

We live in an era of ecological crisis, which is a direct result of human actions. Natural scientists have been debating whether the current historical epoch should be called the Anthropocene, in order to mark the period in which human activities became the primary driver of global ecological change.[1]

Initially, it was proposed that this new epoch, corresponding with the rise of modern capitalist and industrial development, began in the eighteenth century. The growth imperative of capitalism, as well as other sociocultural changes, is a primary factor generating major environmental problems that culminate in ecological crisis.[2]

It has become increasingly clear that humans face an existential crisis. The environmental writer and activist Bill McKibben explains:

Earth has changed in profound ways, ways that have already taken us out of the sweet spot where humans so long thrived…. The world hasn’t ended, but the world as we know it has—even if we don’t quite know it yet. We imagine we still live back on that old planet, that the disturbances we see around us are the old random and freakish kind. But they’re not. It’s a different place. A different planet…. This is one of those rare moments, the start of a change far larger and more thoroughgoing than anything we can read in the records of man, on a par with the biggest dangers we can read in the records of rock and ice.[3]

Many modern ecological problems are referred to as a tragedy of the commons, a concept developed by Garrett Hardin in the 1960s to describe the overexploitation or despoliation of natural resources.[4] We contend that they are actually associated with the tragedy of the commodity. While an obvious play on Hardin’s concept, this approach offers, we argue, a much more comprehensive and historically appropriate analysis of the drivers of ecological degradation.

The classic illustration of the tragedy of the commons used by Hardin involved the dynamic of herders and their livestock. He claimed that each herder will act primarily in his or her own interest by adding additional livestock to common grazing land when it served to increase individual benefits. Therefore, Hardin argued, each herder would attempt to acquire the benefits offered by the commons, while socializing the costs to all. For example, by adding an extra animal to the pasture the herder reaps all the benefit, but pays only a fraction of the environmental costs, such as depletion of the grazing land. Each actor, motivated by individual maximization of benefits, increasingly introduces grazing animals into a finite system of resources, leading to the tragic destruction of the land. With this Hardin concludes “freedom in commons brings ruin to all.”[5] For Hardin, and many others who have adopted this perspective, expanding private property is offered as a leading policy solution for avoiding ecological tragedies.[6]

The tragedy of the commons theory explains the behaviors of individual actors in given social circumstances. However, it does not address how historical conditions and the socioeconomic system influence individual actors. In other words, the social context is simply taken for granted. The existing social conditions and relations are regarded as ever-present, universal, and permanent. The model neglects to recognize that human interactions and exchanges with ecological systems tragedycommoditychange through time and are regulated by particular institutional conditions. Once examined from a sociological perspective, the tragedy of the commons theory is simplistic and one-sided in that it attempts to explain human social behavior, or human agency, without a thorough understanding of the historical social organization.[7] This simplification results in a mystification of the modern systems of production and consumption and the historically specific ecosystem effects.

In contrast, the tragedy of the commodity approach emphasizes the role of the growth imperative of capitalism and commodification in producing the institutional rules by which nature and, for example, the commons are governed and historically transformed. Ecological systems are never altogether free of social influences. Rather, they are shaped by social conditions including norms, traditions, economic rules, the organization of labor, politico-legal arrangements, etc.[8] The social actions that have emerged with capitalist development are dominated by what Adam Smith called “the propensity to truck, barter, and exchange,” matched with a crude utilitarianism, where individuals follow pure self-interest without social constraint. Unfortunately, these actions are often incorrectly ascribed to innate human behavior.[9] Thus, what might appear to the casual observer to be a system governed by base greed and human instinct is in fact largely directed by the drive for capital accumulation and what Immanuel Wallerstein called the progressive “commodification of everything.”[10] Among other outcomes, the commodification process results in a social metabolic order—socio-ecological interchanges and interrelationships—that produces unsustainable social and ecological consequences.

This essay is based on the new book The Tragedy of the Commodity: Oceans Fisheries and Aquaculture by Stefano B. Longo, Rebecca Clausen, and Brett Clark, published by Rutgers University Press (2015).