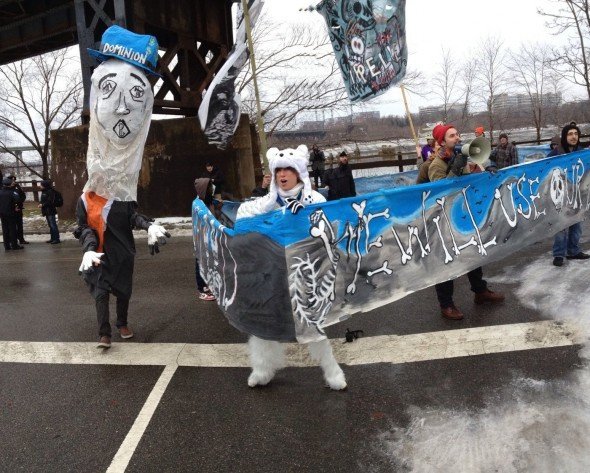 At 7:00 a.m. a group of over 50 activists blocked vehicle access to Dominion Resources’ Tredegar Campus in Richmond, Virginia to protest the proposed Atlantic Coast Pipeline. Traffic quickly formed on Tredegar Street as activists stretched large banners across the road and paraded large puppets around the scene. Two activists remain suspended from a pedestrian bridge with a banner reading “Stop Selling Our Futures” while a larger crowd occupy the access way to the campus below.

The Atlantic Coast Pipeline would transport natural gas from West Virginia, where there is a boom in hydraulic fracturing, 550 miles, through Virginia, and into North Carolina. “This proposal would be a dangerous investment in fossil fuel infrastructure at a time when the scientific consensus is clear that we must invest in renewables, such as wind and solar, to avoid further warming of our planet. ” said Whitney Whiting from Newport News, Virginia.

This action follows several months of grassroots resistance in the region against Dominion. On February 3, an activist scaled a crane at a construction site for Dominion’s proposed Cove Point LNG export facilities in Lusby, Maryland. On February 9, activists with the group Beyond Extreme Energy staged a disruption at a Dominion analyst meeting in New York City’s Waldorf Astoria Hotel, also with the message “Stop Selling Our Futures”.