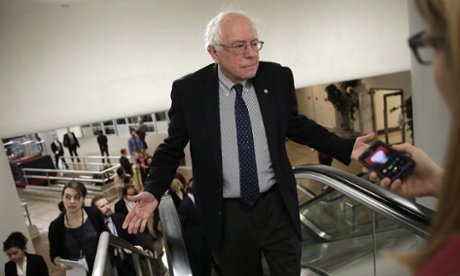 Does climate change exist? The Senate is about to let us know

Congress is to vote on whether climate change is real. Seriously.

The measure, which will come up in the debate about the Keystone XL pipeline, will ask the Senate to vote on whether climate change is real, caused by human activities, and has already caused devastating problems in the US and around the world.

It is intended to force Republicans who deny the existence of climate change – and they are a majority in Congress – to own their anti-science positions, said Bernie Sanders, the Independent senator from Vermont behind the amendment.

“The bottom line is that I think as a nation that we walk down a very dangerous road when the majority party in the United States Congress is prepared to reject science,” Sanders told the Guardian. “I think it is important for Republicans to tell their constituents, to tell the American people, and to tell the world whether they agree with the science or not.”

That could make for some very awkward moments.

Sanders’s amendment has no chance of passage in the Republican-controlled Congress – and he acknowledges that is not the point.

Indeed, when Sanders first introduced the measure in the Senate energy committee last week, one of his fellow Democrats, Joe Manchin of West Virginia, objected to the final clause urging the US to get off fossil fuels and move towards a clean energy economy.