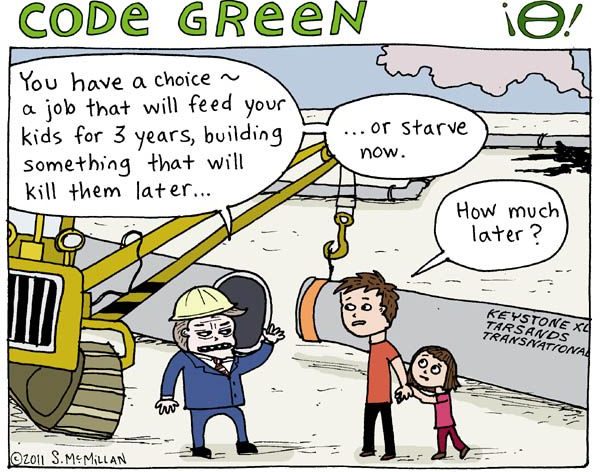 Countering the ‘jobs vs environment’ lie

In an era in which our political system is dominated by plutocracy, grassroots social movements are essential for progressive change. But too often our movements find themselves at loggerheads over the seemingly conflicting need to preserve our environment and the need for jobs and economic development. How can we find common ground?

The problem is illustrated by the current proposal of the Dominion corporation to build a Liquefied Natural Gas export facility at Cove Point, Maryland, right on the Chesapeake Bay. Seven hundred people demonstrated against the proposal and many were arrested in three civil disobedience actions. But an open letter on Dominion letterhead endorsing the project—maintaining it will “create more than 3,000 construction jobs” most of which will go “to local union members”—was signed not only by business leaders but by twenty local and national trade union leaders.

In the struggle over the Keystone XL pipeline, which has been described as the “Birmingham of the climate movement,” pipeline proponents have been quick to seize on the “jobs issue” and tout support from building trades unions and eventually the AFL-CIO. In a press releasetitled “U.S. Chamber Calls Politically-Charged Decision to Deny Keystone a Job Killer,” the Chamber of Commerce said President Obama’s denial of the KXL permit was “sacrificing tens of thousands of good-paying American jobs in the short term, and many more than that in the long term.” The media repeat the jobs vs. environment frame again and again: NPR’s headline on KXL was typical of many: “Pipeline Decision Pits Jobs Against Environment.” A similar dynamic has marked the “beyond coal” campaign, the fracking battle and EPA regulation of greenhouse gasses under the Clean Air Act. Those who want to overcome this division must tell a different story.