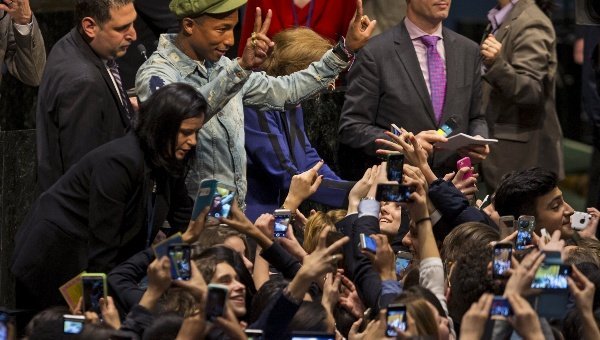 Will a “climate movement across the movements” produce Seattle-style shutdowns or a Paris cul de sac?

TUNIS — Looming ahead in eight months’ time is another Conference of Polluters, or COP (technically, the Conference of the Parties to the United Nations Framework Convention on Climate Change). The last twenty did zilch to save us from climate catastrophe. Judging by early rough drafts of the Paris COP21 agreement recently leaked, another UN fiasco is inevitable.

The Coalition Climat21 strategy meeting on March 23-24 began in Tunis just before the World Social Forum. I had a momentary sense this could be a breakthrough gathering, if indeed fusions were ripe now, to move local versions of “Blockadia” — i.e. hundreds of courageous physical resistances to CO2 and methane emissions sources — towards a genuine global political project. The diverse climate activists present seemed ready for progressive ideology, analysis, strategy, tactics and alliances. Between 150 and 400 people jammed a university auditorium over the course of the two days, mixing French, English and Arabic.

It was far more promising than the last time people gathered for a European COP, in 2009 at Copenhagen, when the “Seal the Deal” narrative served to draw activist lemmings towards — and over — a cliff: first up the hill of raised expectations placed on UN negotiators, before crashing down into a despondency void lasting several years once leaders of the US, Brazil, South Africa, India and China did a backroom deal that sabotaged a binding emissions follow-up to the Kyoto Protocol. In “Hopenhagen,” even phrases like “System change not climate change” were co-opted, as green capital educated by NGO allies agreed that a definition of “system” (e.g. from fossil fuels to nuclear) could be sufficiently malleable to meet their rhetorical needs.

That precedent notwithstanding, the phrase “A climate movement across the movements” used here seemed to justify an urgent unity of diverse climate activists, along with heightened attempts to draw in those who should be using climate in their own specific sectoral work.

Unity – without clarity, responsibility and accountability?

Over the last nine months, since an August gathering in Paris, a great deal of coalition building has occurred in France and indeed across Europe. The proximate goal is to use awareness of the Paris COP21 to generate events around the world in national capitals on both November 28-29th – just before the summit begins – and onDecember 12, as it climaxes. There was consensus that later events should be more robust than the first, and that momentum should carry into 2016. (The December 2016 COP22 will be in Morocco.)

Christophe Aguiton, one of Attac’s founders, opened the event: “In the room are Climate Justice Now! (CJN!), Climate Action Network (CAN), international unions, the faith community, and the newer actors in the global movement, especially 350.org and Avaaz. We have had a massive New York City march and some other inspiring recent experiences in the Basque country and with the Belgium Climate Express.”

But, he went on, there are some serious problems ahead that must be soberly faced:

Still, he explained, “We won’t talk content because in the same room, there are some who are moderate, some who are radical — so we will stress mobilisation, because we all agree, without mobilisation we won’t save the climate.”

But this unity-seeking-minus-politics was reminiscent of a process four years in South Africa known as “C17,” a collection of 17 civil society organisations that did local preparatory work before the UN’s COP17 Durban climate summit. Actually, fewer than a half-dozen of the 17 representatives really pitched in throughout, and the moderate organisations which had promised to mobilise financial resources, media attention and bodies ultimately did none of these. South Africa’s Big Green groups and trade unions failed to take C17 ownership, to commit resources and to add the institutional muscle needed.

The Durban counter-summit messaging was vapid and virtually no impact was made on the COP or on South Africa’s own reactionary emissions policy. The final rally of 10,000 activists midway through the COP17 unfortunately presented UN elites and local politicians with a legitimating platform. Nor did we use the event to build a South African climate justice movement worthy of the name. So my own assessment of the “state failure, market failure and critic failure” in Durban strongly emphasised the problem of excessiveunity, without ideological clarity, institutional responsibility or political accountability.