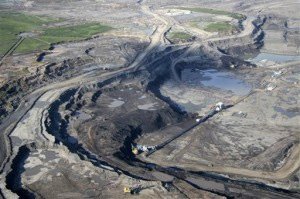 The Climate Impact Of Canada’s Tar Sands Is Growing

Canada’s tar sands are emitting more greenhouse gases per barrel now than they did five years ago, according to a new environmental report card. The Canadian Association of Petroleum Producers found per barrel greenhouse gas emissions for tar sands and other unconventional oil sources — like oil shale — have grown by 21 percent, and total emissions have grown from 90 million metric tons in 2008 to 109 million metric tons in 2012. The increase is the result of a growth in the production of tar sands and other sources of unconventional oil and is in spite of industry attempts to reduce the energy it consumes to produce tar sands, a fuel that’s among the most energy-intensive on Earth.