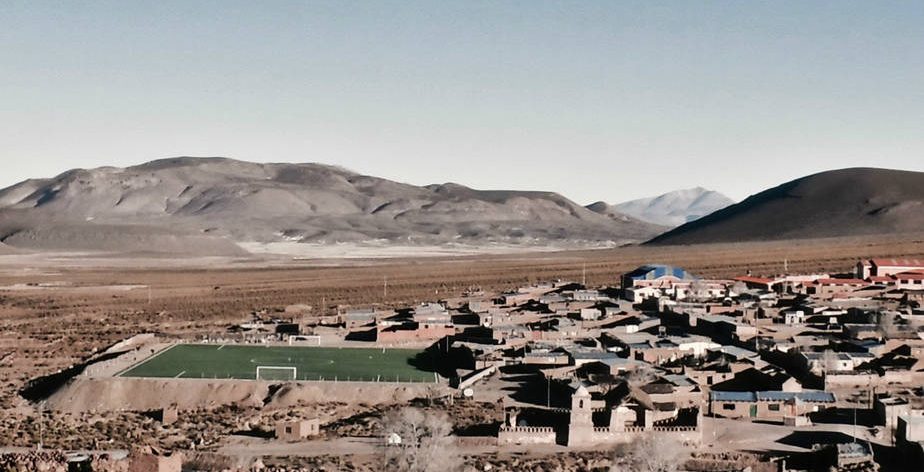 Climate Change Is Making This Bolivian Village a Ghost Town

Cupped in the Bolivian highlands that border Chile, the small village is littered by centuries of conquest and expansion: from the pre-Incas, who ringed the surrounding hills with protective fortresses, to the gold-hungry Spanish conquistadors drawn to the region’s mineral wealth.

But after centuries of settlement, Santiago K has become a ghost town. Drought, debt and climate change have squeezed roughly 80 percent of Santiago’s residents from their homes in search of work and a better life.

Justino Calcina, 58, is one of the few who stayed behind. As mayor of Santiago, he stayed because he had to. Only community leaders and the very old remain.

“Life in the community isn’t guaranteed,” Calcina says. Yellowed newspaper pages block the windows of abandoned houses. Herds of roaming llamas tramp through the streets. Most of Santiago’s younger families, Calcina says, have fled to Chile. There, men scavenge for jobs in construction, mining and seasonal farmwork. Women find work as domestic employees, cooking, cleaning and washing the clothes of better-off Chileans.

The Promise of Quinoa

It is an ancient town. Settlement near Santiago dates to the 12th century. The Incas built a shrine at the peak of Caral Inka, a mountain to the west still used for traditional sun and rain ceremonies. The Spanish built Santiago’s church, which sits in the village center, from mud-brick and gravel. The small village has witnessed the rise, tottering and fall of empires, and outlasted them all.

Today, Santiago’s farmers draw much of their income from the production and sale of quinoa. A nutty grain indigenous to the Andean regions of Bolivia and Peru, quinoa traditionally was harvested by hand on smaller plots. In the dry Andes, scarce rainfall kept plants watered. Farmers sold most of their yields at a regional market or through cooperatives; the rest they set aside for personal use. South America’s upper-class spurned the grain as “Indian food.”

But then the world caught on. In 2012, a staggering uptick in demand for quinoa—from the United States especially—pushed Santiago’s farmers to expand production. Flush with bank credit, farmers purchased tractors and encroached on land normally left to wild shrubs. The idea was to harvest more, faster. And for a while, business was good. From 2000 to 2014, the price of quinoa tripled.

Then the rain stopped. For two seasons, from 2015 to 2016, as the El Niño weather cycle combined with rising global temperatures, crops shriveled. Production dropped to nothing. The river that jags through Santiago slowed to a trickle, then dried to sand.

At around the same time, Peru’s quinoa exports jumped. Supply pumped skyward. And in Bolivia, prices crashed, by as much as 75 percent from their peak in 2014.

All at once, with scanty crops and banks breathing down their necks, many of Santiago’s quinoa farmers faced a hard choice: move or perish.

Climate shocks tend to hit the poor the hardest and those in rural areas who often have fewer resources to recover quickly or to weather an extended drought. Studies in communities around the world have shown how climate shocks affect human health as food, water and crop income become more scarce and pressure migration.

As in much of South America, a spate of flooding, drought and mudslides have plagued Bolivia in the last decade because of El Niño events and changes in the climate. Bolivia is among the nations least responsible for climate change—in 2010, it released about 13 million metric tons of carbon dioxide emissions from energy consumption, as compared to 5,610 million metric tons emitted in the same year by the United States—yet the country is remarkably vulnerable to its effects.

Of all the countries impacted by climate change, Bolivia is among the most visibly affected. Whole glaciers have melted. In 2016, the country’s second-largest lake, Lake Poopó, dried up and vanished. In the same year, the worst drought in 25 years led Bolivia’s government to declare a state of emergency in 142 of Bolivia’s 339 municipalities. Residents of El Alto, the booming indigenous city splattered across the plateau above La Paz, took water authorities hostage.

It is among the most impoverished nations in South America. Land-locked and mapped by extremes of geography—from high desert to tropical jungle—Bolivia lacks the infrastructure of neighboring Chile and Argentina. What growth there is—in mining and agriculture mostly—hangs on scarce water sources. Nearly 40 percent of the country’s electricity is drawn from hydroelectric dams powered by glacial runoff and rainfall. In 2014, three-quarters of all employment outside of agriculture was informal. About 45 percent of the population lives in poverty.

The increasing frequency of climate shocks, matched by the vulnerability of Bolivia’s population, makes Bolivia uniquely prone to natural disasters. Where climate change does not force migration directly, it sharpens existing points of insecurity.

“I would migrate, possibly, I would,” muses Hector Saturnine Lupa, 50, a quinoa farmer in Santiago. “This year, the quinoa is cheap, cheap. It doesn’t cover the costs of production.” Lupa says he plans to stay—his children live nearby—but it wouldn’t be the first time he’s had to migrate.

Santiago’s older residents have long leaned on migration when work is scarce. When a crippling drought struck the altiplano in the early 1980s, many, including Calcina and Lupa, sought employment elsewhere. Like today’s migrants, Lupa bounced between jobs in Chile, finding work in mines. But both Calcina and Luoa say last year’s drought, and the migration that tailed it, were particularly severe.

Rural migration within Bolivia tends to flow toward urban areas like El Alto, the booming city sprawled above La Paz. According to Raoul Kaezing, a researcher at the University of Neuchâtel in Switzerland, many households in Bolivia’s altiplano maintain a “double residency,” caring for a farm while studying or working in the nearest city.

The causes for migration in Bolivian highlands, however, are indistinct. A stream of interlocking vulnerabilities coax resettlement.

Many of these stem from the production boom of the last decade. Soaring prices encouraged farmers to borrow heavily, thinking that prices would hover near the same level. When prices tumbled, farmers were forced to find other means to pay off debts. With work meager in Santiago, migration seemed to many to be the logical choice.

The same spike of demand nurtured unsustainable and self-defeating practices of land use. Incentivized to harvest, Bolivian farmers pushed onto marginal lands ill-suited for production. According to a study by Lasse Sander and Sven-Erik Jacobsen, “the almost complete removal of natural … vegetation over large and continuous areas [resulted] in increased wind erosion and partial crop failure.” The effect was an “escalating, land-intensive production … characterized by high erosion rates and a dissipative resource use.” Another of Jacobsen’s studies links the introduction of the tractor and heavy machinery to a direct degradation of soil fertility. Rapid production allowed by machinery then tipped land quality into disequilibrium.

A paucity of rainfall did have an obvious hand in killing off crops. But Bolivia’s water troubles stem from more than drought alone, points out Dirk Hoffmann, former head of the Bolivian Mountain Institute. Faulty infrastructure and development restricted, and restricts, access to water. Existing water infrastructure strains to accommodate the exploding populations of urban areas; in the last 25 years, the size of El Alto has roughly tripled to more than 900,000 inhabitants. From 2006 to 2011 alone, one-third of Bolivia’s population migrated into cities. In addition, Bolivia’s mining industry filters off and contaminates large amounts of the limited fresh water in the altiplano.

What resulted was a crop and economy vulnerable most of all to climate change. Climate change, Hoffmann notes, acts in addition to “conditions already difficult in the high Andes, often making conditions still worse.” More than a cause for migration, climate change exacerbates existing pressures that push or pull someone from their home.

Nearly to the man, Santiago’s farmers remarked on the unusual shifting of weather patterns closely observed. Calcina says he’s noticed Bolivia’s climate sharpen to extremes over the past half century: bitter cold and terrible heat, beating rain and punishing drought. “Before it was much stabler. Rain arrived in the rainy season. There was a time for wind, when the wind came. But now it’s not like that,” he says.

With its super-grain now scarce, Santiago is exploring its options. “Our only sustenance in this town, and in this region, is—or was—quinoa,” Calcina says.

The solution Calcina prefers is community-based tourism. Thousands of tourists flock each year to nearby Uyuni, to see its expanse of salt flats, some of the largest in the world. Calcina is keen to tap some of this market. But financial resources are few, and Uyuni is three hours from Santiago by bus, the only road a rutted track pressed to the desert floor.

Mining offers another viable option, says Cristo Bernal Ramos. Uyuni is home to one of the world’s largest deposits of platinum; the same mineral wealth might be found in Santiago. “We need to consider every possibility,” Ramos says. “One must think about how we’ll live.”

Santiago K has received little outside support, but it has survived worse. Calcina believes life here will go on, as it always has—so long as someone stays; so long as someone makes sure it does.  “I am not ready to leave my town,” he says, pausing to trace the sloping landscape by sight. “I am made for my land.”

Ben Walker is a 2016-17 Thomas J. Watson Fellow who has been reporting on climate change and mass displacement.