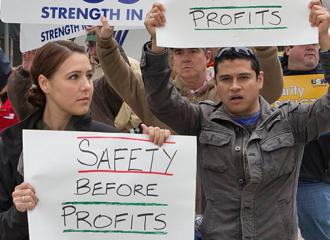 Climate activists have to stand with the strikers

SOME 5,000 union members represented by the United Steelworkers (USW) are on strike at 11 refineries in six states, and counting. Workers at BP refineries in Whiting, Indiana, and Toledo, Ohio, joined the strike this week. The union could bring out more than 30,000 workers at 63 refineries plus related oil terminals, pipelines and petrochemical facilities, which would dramatically affect oil production.

The oil workers are fighting energy giants who put their multibillion-dollar profits ahead of the health and safety of their employees and the surrounding communities, whom they treat as disposable. Workers are demanding that the oil corporations address safety issues on the job, including forced overtime and outsourcing of work to contractors.

The strike comes amid a growing climate justice movement–a movement that is also challenging the fossil fuel industry. These corporations are poisoning our drinking water, filling our soil with toxic waste, and polluting the air we breathe.

Tesoro, Shell, Chevron, Exxon and other oil affiliates have blood on their hands. The most recent example is the explosions on trains transporting crude oil through towns and cities–trains that eventually bring crude oil to these refineries. The very plants where workers are squaring off with their bosses–in Anacortes, Washington, and Richmond, California, for example–have been the sites of explosions and fires that killed workers and exposed communities to deadly toxic chemicals.

At the extraction end, this industry sucks vital natural resources from the ground–specifically on Native lands, violating treaty rights of First Nations or surrounding working-class communities and farms–as it increases CO2 emissions that are burning up our planet.

Thus, some activists in the climate justice movement have asked why they should support workers in an industry that is the root cause of all these ills. While groups like 350.org, the Sierra Club and others have called on their members to support the strikers, some radicals are asking whether they should call for the destruction of the industry instead, and move ahead with the transition to renewable energy facilities like wind, solar and thermal. Can we be in solidarity with the workers, they ask, given their demands don’t talk outright about climate change, global warming and the need to get rid of an industry that currently puts food on their tables?

The answer should be yes to all these questions. We should be in active solidarity and support the strike if we ever hope to have a real transition out of fossil fuels. Our enemies are the corporations endangering all our lives, not the workers…more