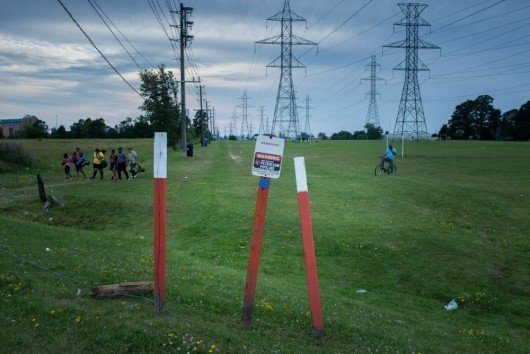 The class politics of pipeline resistance

The Jane-Finch community is among the many neighbourhoods in Toronto that Enbridge’s Line 9 runs through. Standing at the geograph­ical margins of the city, Jane-Finch is a low-income, racialized community that faces many challenges, including chronic unemployment and underemployment, targeted policing, and substandard housing. Not surprisingly, the community is routinely stereotyped and vilified. It also happens to be a hotbed of activism.

Line 9 currently carries conventional oil from Montreal to southern Ontario but is slated to transport bulkier Alberta tarsands oil and less stable Bakken crude oil in the opposite direction. The proposal to reverse the flow of the 38-year-old pipeline has been the subject of significant activism across Ontario. The fact that Enbridge’s proposal was approved by the National Energy Board without there being an environmental assessment has also generated concern. Errol Young of Jane-Finch Action Against Poverty says: “The Line 9 reversal adds to the environmental concerns faced by the community, including tank farms [oil depots] that create air pollution and result in a constant movement of giant trucks carrying gasoline on our roads.” The prospect of a spill is highly distressing as the pipeline passes close to homes, shopping malls, schools, health centres, and a subway line under construction.

The potential environmental harm connected to the pipeline is not limited to the local perspective, however. The climate crisis, which is fuelled by projects like the Line 9 reversal, also concerns Jane-Finch residents. And climate change, now experienced in the form of increasingly powerful storms, droughts, and floods around the planet, can feel very close to home. Extreme weather events like last year’s devastating Typhoon Haiyan in the Philippines routinely strike countries to which residents of Jane-Finch have intimate ties.

Despite the concerns about the pipeline that exist in Jane-Finch, it’s been tough to build links between the community and the anti-Line 9 work being done elsewhere in Toronto. It has been challenging, for instance, to convince community activists to attend meetings and events about Line 9 that take place outside of Jane-Finch. This is in part because Jane-Finch activists are busy organizing around multiple issues – including ever-impending cuts to the social safety net – that have immediate impact. To a significant extent, however, the difficulty in building links arises from differing terms of engagement with en­vironmental issues.

Much environmentalism today is individualistic and lifestyle oriented, typified by choices to commute by bicycle or buy organic groceries. Jane-Finch activists, on the other hand, are more likely to see the negative impacts of environmental harm as part of the package of social marginalization to which their community is subject.

Lifestyle changes cannot be reasonably demanded of underprivileged people with more than enough to worry about already. Moreover, the focus on individual lifestyles shifts attention away from the structural roots of the problems, environmental or otherwise, that confront us. It also doesn’t help when en­vironmentalists appropriate Indigenous and eastern spiritual traditions, which can seem disrespectful and does little to address the material problems faced by marginalized communities.

This isn’t to suggest that the particular activists leading the fight against Line 9 in Toronto spend most of their time stressing bicycle commuting and purchasing habits while chanting Buddhist hymns. Far from it. They highlight Enbridge’s terrible environmental record, point to the disturbing ties between the fossil fuel industry and the state, and lament the environmental impacts of continued fossil fuel use. They also insist on the need for an energy transition that would include the creation of green jobs so that not only the environment but also common people benefit from policy changes. While such discussion of a green transition tends to treat the core problem as an absence of political will and fails to explore the deeper structural reasons why such a transition isn’t forthcoming, it is an important attempt to outline how the needs of everyday people can be reconciled with the needs of the environment.

In fact, the Toronto campaign has demonstrated an admirable commitment to connecting pipeline resistance to the broader realm of social and environmental justice. John Riddell, a long-time activist and a member of East End Against Line 9, isn’t wrong when he says that “the ‘No Line 9’ milieu is strong in grappling with tarsands, fracking, climate change as a whole, and Indigenous rights.”

The direction being taken by those leading the anti-Line 9 campaign notwithstanding, the air surrounding the campaign is choked by more run-of-the-mill environmentalism. At a recent downtown event closely related to the campaign, a discussion on climate change was interrupted by someone who wanted to tell us about the need for everyone to grow their own food. I had persuaded a few Jane-Finch activists to make the long trip to attend the event and was embarrassed when the food grower continued on and on with his plea, gaining the support of many of the environmentalists who were present. He eventually got into a heated exchange with someone about the need to love seeds. It is not clear what is gained by such pleas and debates, but much is lost, including the interest of activists who are organizing around issues that matter most to underprivileged urban communities. The Jane-Finch activists who attended the event were not terribly impressed. One said to me afterwards, “I don’t want to go to more things like this.”

Those taking up the cause of the en­vironment have traditionally had trouble getting on the good side of working-class people and racialized communities. The cause has suffered tremendously because of it. The challenges of building links between Jane-Finch activists and the wider anti-Line 9 campaign should be seen as an opportunity to tackle the matter. Issue-based activism of the kind many of us are involved in does not always produce opportunities for discussing underlying ideas and approaches to activism. Now that we have such an opportunity, we should take it.

“Activist culture is often alienating for the average person,” says Connor Allaby of Jane-Finch Action Against Poverty. “If we want to build a broader movement, it will help to resonate with common people.” In the case of en­vironmentalists, if they want to be taken seriously by marginalized communities, they need to become aware of their own individualism. We need to change the structures of our social system, not our light bulbs. Growing one’s own food, or even growing food collectively, is not on its own a means by which injustice can be confronted. Too often, only those with a relative amount of privilege can become involved in projects of this kind, and they can end up retreating from reality into a local utopia, which is no way to push for progressive social change. As the American political theorist Jodi Dean has said, “Goldman Sachs doesn’t care if you raise chickens.”

Looking at the historical record, from the civil rights movement to labour reforms, we can ask whether meaningful social change is created by relatively privileged minorities who attempt to create isolated utopias or whether it arises from the activities of the oppressed who work together to overcome their oppression. Surely the latter is most important. We need to recognize our common sources of oppression, understand their structural underpinnings, and work to overcome them.

A further word must also be said about the role of spirituality among environmentalists. There is an irony here within the environmental justice movement. White progressives who call themselves environmentalists have a troubling tendency to indulge in mysticism (through yoga, meditation, communicating with the world of plants, etc.) while losing sight of the social struggle. Meanwhile, Indigenous peoples the world over have, with their spiritual traditions intact, taken up a leading role in the struggle for social change. Rather than haphazardly trying to adopt their spiritualism, we should learn how to adopt their spirit of struggle. Efforts to create a coherent radical politics require a commitment to rationality, and falling into a patchwork of mysticisms is no way to establish that.

As vital as the Line 9 struggle is today, it likely won’t remain an issue for activists to organize around that far into the future. While working to ensure that the pipeline reversal is stopped, we also need to think about how we can improve our effectiveness by removing the obstacles to linking distant and disparate groups. The environmental justice movement will not reach its potential if it continues to alienate some of the most marginalized and most politically radical sections of the population.

Umair Muhammad is the author of Confronting Injustice: Social Activism in the Age of Individualism. He is a member of Jane-Finch Action Against Poverty and has recently been active in the campaign against Enbridge’s Line 9 pipeline.