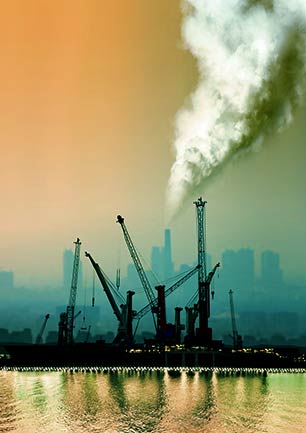 The climate crisis is the greatest threat humanity has ever faced. At the current rate of global greenhouse gas emissions, warming of the planet will shoot past two degrees Celsius by mid-century and reach 4°C to 6°C beyond pre-industrial averages by 2100. The magnitude of the impending catastrophe was eloquently described by Hans Schellnhuber, director of the Potsdam Institute for Climate Impact Research, when he said, “the difference between two and four degrees is human civilization …” Adding to that, the biosphere faces massive pollution, resource depletion, species extinctions, ocean acidification, among other looming dangers.

But can we save ourselves? In his new book, Green Capitalism: The God that Failed, Richard Smith argues compellingly that “sustainable production is certainly possible but not under capitalism” and even more forcefully, “capitalism and saving the planet are fundamentally and irreconcilably at odds.” To this central question, Smith brings an impressive command of economics and an engaging conversational style of writing. He explains and illustrates with devastating clarity the key mechanisms of capitalism that force it to grow unendingly, and these explanations are supported with a broad array of examples of corporate and national economic practices from around the world.

Green Capitalism: The God that Failed is a compilation of previously published complementary essays. The first of the five chapters reviews the writings of Adam Smith and the historical transition to capitalism in Europe. Chapter 1 explains how, right from the start, market competition led to rapid innovation, which in turn led to expansion of the market, a cycle that has continued ever since. Capitalist economics, therefore, had ecological implications from its inception, distinct from all earlier periods.

Ecological implications, however, are ignored by mainstream economists. In this respect, Smith reports that, “introductory macroeconomic textbooks used by most US economics departments is revealing of the profession’s lack of contact with reality.” Mainstream economists, from Milton Friedman to Paul Krugman, recognize the necessity of unending economic expansion with rising consumerism. Without that, capitalism would collapse. According to Krugman, “…while it will be a shame if Americans continue to compete over who can own the most toys, the worst thing of all would be if the competition comes to a sudden halt.”

Economic expansion is unavoidable under capitalism, but destruction of the planet is the inexorable result. As Richard Smith summarizes:

“… insatiable growth and consumption is destroying the planet and dooming humanity – but without ceaselessly growing production and insatiably rising consumption, we would be even worse off. Such is the contradictory and suicidal logic of capitalism.”

Even setting aside the destruction of the planet, the invisible hand of the market has failed in its own terms. Smith reminds us that “Two-and-a-quarter centuries after [Adam] Smith wrote, global capitalist development has produced the most obscenely unequal societies in history, with half the world living on less than two dollars a day, billions of people living in desperate poverty …”