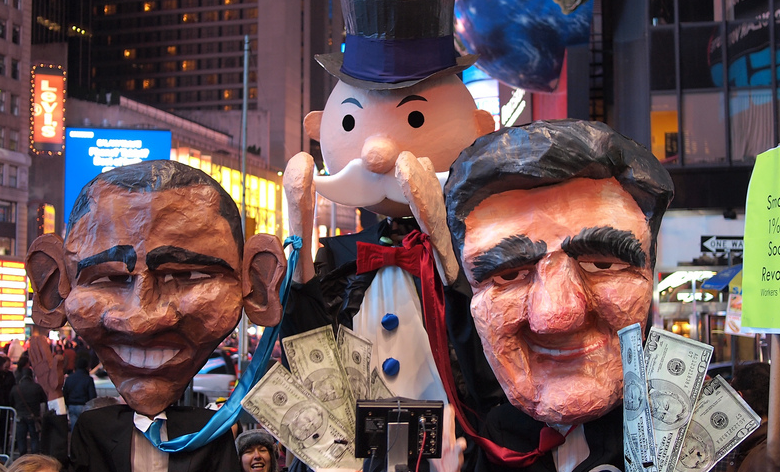 Building a post Occupy alternative to the two party system

Since the end of the most active, public phase of the Occupy movement, a number of activists have looked for ways to carry on the fight against the “1 Percent.” This ongoing struggle has taken many forms–among them are recent attempts to build an independent political alternative to the two dominant capitalist parties.

The most spectacular breakthrough on this front was, of course, the election of Socialist Alternative candidate Kshama Sawant [2] to the Seattle City Council. But there have been other efforts. Last fall, in Loraine County, Ohio, a labor-backed challenge to the pro-business Democrats swept the county board [3] in local elections. This fall, among other campaigns, the Green Party ticket of Howie Hawkins and Brian Jones [4] for governor and lieutenant governor in New York state will provide an alternative for voters who want a genuine choice besides a retrograde Republican and pro-corporate Democratic incumbent Gov. Andrew Cuomo.

These campaigns have highlighted many issues, but they tend to cluster around ones that raise the central question of politics today: The growing inequality between rich and poor as a consequence of unbridled corporate power, including its domination of the political system.

But within the broader framework of “independent politics,” it is important to note the differences. The Green Party campaign in New York is an opportunity to register a protest vote in an election with millions of people participating. By contrast, the Sawant campaign was strategically oriented toward winning local office in an election with particularly favorable conditions for a left-wing candidate.

Even more important is the differences in aims. Both the Sawant and Hawkins campaigns are an outsiders’ challenge to the two corporate parties, whereas the Loraine County effort seems content to punish the Democrats now so they will nominate more labor-friendly candidates in the future.

Independent campaigns of any kind are still few and far between, so most of the activities and initiatives of the left will still be in arenas other than elections. But the opening for left-wing electoral politics has grown, so it’s important for socialists to take stock of this development–and to see how it fits into the larger project of building working-class power and organization.

The firsr thing to note may be obvious, but given the amount of time socialists devote to showing how the political system under capitalism is stacked against us, it’s important to stress that we believe workers and their organizations must nevertheless be involved in politics. The reason, as Karl Marx and Frederick Engels pointed out more than a century and a half ago, is that the class struggle is an economic, ideological and political struggle. Workers and their organizations must ultimately be involved in the political arena, rather than leaving it solely in the hands of the bosses and the 1 Percent.

Even the most pro-Democratic Party union official might agree with that general sentiment–which is why they spend so much time, money and effort electing Democrats. The problem, however, is that electing a Democrat means electing a representative of the 1 Percent in the hopes that they might do something worthwhile on behalf of the people who worked to get them into office.

The Democratic Party is a capitalist party, not a party representing the working class. No matter who votes for it–and, of course, the majority of Democratic voters are workers–the party apparatus itself is set up to reflect, and to some extent, organize the political interests of big business.

The mechanisms by which this takes place are hidden in plain sight: a campaign finance system that channels corporate money to political candidates; a network of think tanks and academic institutions that articulate the positions of Corporate America; a lobbying machine that applies continual pressure to legislators, the executive branch and the unelected government bureaucracy, at the federal, state and local level, to carry out the corporate agenda.

Labor is at a disadvantage on all these playing fields, including political donations. Even though unions contribute far more money to Democrats than Republicans, big business still outspends them by a factor of 10-to-1 or more. Thus, any money or campaign support that labor “delivers” to the Democrats is offered among all the other sources of money and support, predominantly corporate, that the party’s candidates receive.

Given all this, it’s little wonder that, once in office, Democratic officials have time and again ignored labor’s demands and priorities. The leaders of the Democratic Party understand that organized labor will ultimately back them, despite some grumbling, no matter what they do. So long as this remains true, the Democrats will play labor for chumps.

This is why the great unaccomplished task of the labor movement is to develop its own independent politics–not only what policies it supports, independent of the considerations of what helps Democrats, but how it can build organizations, political strategies and candidates who are committed to labor’s goals. The goal isn’t to pressure the Democrats to move closer to labor’s agenda, but to create a viable independent alternative to the two mainstream parties of capitalism.

Thus, the question isn’t whether labor, working people, environmentalists, anti-racists and other popular forces need to be active in politics in order to advance their interests. It’s about how and what kind of politics they should fight for.

Organized labor and working class organizations–from immigrants’ rights groups to the Fight for 15 and more–need to declare independence from the Democrats. But what does this mean?

At the most basic level, labor and the rest of the 99 Percent should say “no” when Democratic politicians, who do little or nothing for workers, start talking about “fighting for the middle class” when they need votes at election time. Instead of spending millions of dollars and thousands of person hours on canvassing, phone banking and the rest for politicians who will serve the capitalists, what if labor devoted its efforts behind candidates who genuinely represent its interests–not to mention organizing the unorganized and all the other struggles beyond the ballot box?

This second point is worth underlining: Labor’s power comes from its ability to mobilize and take action, not from the ballot box or working the backrooms of Congress.

That should be the lesson of the 2011 Wisconsin Uprising against Gov. Scott Walker’s union-busting legislation. Workers were most effective against the Republican assault when they were occupying the Capitol building–which forced Democratic legislators to leave the state, obstructing Walker’s push for his bill–and when they organized actions like the statewide sick-in by teachers.

As soon as the Capitol occupation ended–at the urging of union officials and Democratic officeholders–and the labor movement shifted to the Democrats’ preferred strategy of recall campaigns against Walker and Republican senators, the energy was sucked out of the movement. Walker was able to regain the initiative and survive the recall.

What about labor and activist organizations supporting candidates who are independent of the corporate parties? A lot of people will agree with this…someday. We’ll have our own candidates in the future, they say, but we don’t have that luxury in the coming election, when labor doesn’t have the chance to put independent candidates in a position to win in most cases. If we don’t get behind the Democrats for this election, the argument goes, we’ll get Neanderthal Republicans, and that will set us back even farther.

This is a persuasive argument–it’s no doubt why millions of people get themselves to the polls, election after election, despite their disappointments in and criticisms of the Democrats. But the “lesser evil” argument comes around every election cycle–so it’s hard to see how we’ll ever break out of the dilemma.

The logic of this argument produces two self-reinforcing ends: First, labor’s horizons are always set by the “lesser of two evils.” Our side never asserts what it wants–its political vision and message always end up revolving around what it doesn’t want. Second, there’s never a “good” time for labor to assert itself. Victory is never guaranteed, so there is never any good moment for an independent party to strike out on its own.

But of course, no labor or socialist party in any country ever started as a majority party. They all started small and grew over time. For anyone convinced that the Democrats offer no way forward, they shouldn’t waste any time in building an alternative.

This brings us to the current independent political campaigns. Socialists are actively involved in building these efforts and hopeful of any chances of success, whether that is measured by an outright local victory in the case of Sawant, or a bigger profile and sturdier organization for the left and the issues it champions. Both the enthusiasm and confidence generated by Sawant’s victory itself and the concrete support that having a socialist in office can lend to Seattle’s social movements are important.

But we also have a further goal, beyond the successes of individual campaigns and initiatives–building a ongoing political alternative to the two big business parties. Part of taking stock of left-wing electoral campaigns and their outcomes is judging whether and how they have contributed to this longer-term project.

The focus here can’t be only on explicitly socialist campaigns. In the 1880s, Frederick Engels encouraged the small socialist groups that existed then to get involved with the campaign of the middle-class reformer Henry George, who ran an independent campaign, backed by the unions, for mayor of New York City, against the Tammany Hall Democrats and the Republicans. To Engels, who wasn’t that enamored of George himself, the campaign presented socialists with an opportunity to raise class demands within a wider political arena.

In the 2000s, socialists supported and worked in Ralph Nader’s presidential campaigns, even though we recognized that Nader was not a socialist himself–and that the Green Party that made him its 2000 presidential candidate ranged from socialists like Hawkins to more moderate radicals in other parts of the country. Even so, Nader’s 2000 campaign was a principled challenge to the two-party duopoly–and a popular one, winning 2.7 million votes.

Crucially, Nader’s 2000 run in particular gave voice to a broader political awakening that developed within the global justice movement sparked by the Seattle protests against the World Trade Organization the year before. The campaign helped to organize a layer of activists, socialists and not, around a concrete challenge to the politics of lesser evilism and a broad left-wing agenda in opposition not only to corporate power, but racism, imperialism and other social ills.

Like the current-day left-wing campaigns underway in New York City, Chicago, Oakland and Portland, to name just some of the cities, we judged the importance of the Nader campaign not only by its vote totals and national prominence during the election year, but its contribution to the building of a left, including an ongoing political alternative.

The small steps toward political independence from the Democrats we take today today may seem like a long way from the ultimate goal of organizing an enduring political vehicle for the 99 Percent. But we shouldn’t be deterred by the ambition of this goal. It isn’t unattainable. Just in the last decade, labor, indigenous and social movement activists have come together to create Québec Solidaire [5] (QS), a left alternative to the dominant neoliberal parties, built in the context of mass struggle in that Canadian province.

QS has become an important political player in the Québécois political scene–not through logrolling or patronage, but by standing up for movements protesting austerity, championing the environment and fighting for the rights of First Nations peoples. If the current campaigns underway in the U.S. bring us a step closer to the kind of formation that QS represents, then they will have served the cause of moving our side toward political independence from the 1 Percent.

The 1 Percent already has two parties to represent them. It’s about time we had at least one to represent us.