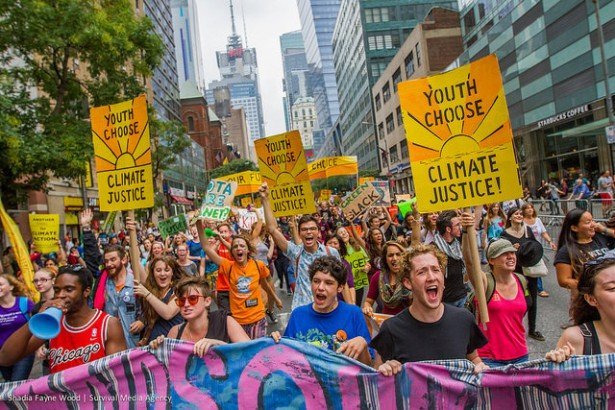 Since international climate negotiations began a quarter of a century ago, annual greenhouse gas emissions have increased by 60 percent. As we approach yet another climate summit this November in Paris, the question for the climate protection movement is not just, can some kind of agreement be reached, but how can we reverse the continuing climate catastrophe over the next quarter-century?

Last November, the two largest greenhouse gas polluters, the United States and China, reached a widely-touted deal. The former would reduce its emissions by 26-28 percent by 2025, while the latter would cap its emissions around 2030. What would this mean for the climate? Cambridge University number cruncher Chris Hope concluded that if the European Union countries cut emissions by 40 percent by 2030 (as they have pledged), if the rest of the developed countries follow the U.S. commitment, and if the developing countries follow China’s promise, the most likely result will be a global temperature rise of 3.6 degrees Celsius in 2100. The chance of staying below the 2 degrees Celsius increase — which scientists say is the maximum compatible with human civilization as we know it — is barely one in a hundred.

In short, this means the governments of the world are prepared to destroy the basis for human life on Earth — unless the people of the world stop them. The time from now through the Paris summit can play an important role in developing the power and conviction we need to do so.

The power of the people to protect the climate

Climate protection is straightforwardly in the interest of all of the world’s people, yet we have been unable to impose that interest on the world. The political systems of the most powerful countries are dominated by fossil fuel interests that want to continue emitting greenhouse gases. National governments suffer a “democracy deficit” that makes conventional electoral politics and lobbying appear fruitless for ordinary people. At the same time, they fear global climate protection may interfere with their pursuit of wealth and power. The dynamics of capitalism make climate protection policies appear as a threat to prosperity. The world’s dominant economic ideology, neoliberalism, condemns anything that might interfere with the pursuit of private profit. And the institutions that supposedly represent the world’s people, notably the United Nations, are in fact dominated by national governments and those who control them.

This world order of climate destruction has so far proven to be insurmountable for climate protection strategies that operate exclusively within the framework of conventional electoral politics and lobbying. But finding ways to act effectively when conventional representative institutions fail is what social movements do. From the abolitionists to the civil rights movement to Polish Solidarity to the Keystone XL pipeline blockades, when democratic channels have been blocked, social movements have used “people power,” or direct action, to do what was in the interest of the people.

As Gandhi once wrote, “Even the most powerful cannot rule without the cooperation of the ruled.” The powers that are responsible for climate change could not continue for a day without the acquiescence of those whose lives and future they are destroying. They are only able to continue their destructive course because others enable or acquiesce in it. It is the activity of people — going to work, paying taxes, buying products, obeying government officials, staying off private property — that continually recreates the power of the powerful. A movement can be powerful without weapons or violence if it withdraws that cooperation from the powers that be. Fear of such withdrawal can motivate those in positions of power to change.

Of course, a collection of frightened, isolated, confused individuals will find it difficult to engage in such concerted action. So in order for “people power” to express itself effectively, people must organize themselves, gain the conviction that their action is necessary and right, and discover their power in action. That requires a social process that joins people together in a social movement, clarifies common interests, exposes the false arguments of the opposition, establishes a claim to moral and legal legitimacy, and engages in actions that reveal the potential power of the people.

We can already see this process beginning. It was exemplified by the global climate actions last September, when people in 162 countries joined 2,646 events to demand global reductions the greenhouse gas emissions that are generating climate catastrophe. An estimated 40,000 marched in London; 30,000 in Melbourne; 25,000 in Paris. Some 400,000 joined the People’s Climate March through the center of New York City. The climate protection movement has come a long way since 2006 — when a march of 1,000 people through Burlington, Vt., was the largest climate protest in American history — or since 2013 — when a 40,000-strong protest was the largest U.S. climate demonstration.

Continued exponential growth is essential, but people power is not just a question of numbers. The movement worldwide has turned to direct action using the tactics and traditions of civil disobedience. Thousands of people have engaged in hundreds of civil disobedience actions around the world, from sit-ins at the White House against the Keystone XL pipeline to the 2013 occupation of a Gazprom Arctic oil drilling platform by 30 protesters from 18 countries. By adopting civil disobedience, the climate protectors have moved beyond conventional political and lobbying “pressure group” activity to risking arrest to save the planet.

The right of the people to protect the climate

The governments that will be meeting in Paris rule the world, but they do not own the world. Under international law the earth’s shared natural resources belong to the world’s people and their posterity, as the common heritage of humanity.