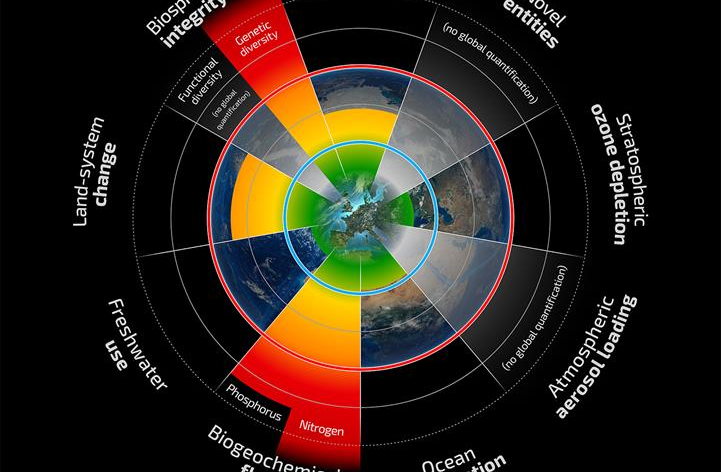 Bounding the planetary future: why we need a Great Transition

We confront an existential risk without historic precedent: human environmental pressures have reached such a pace and intensity that they may cross tipping points, irreversibly altering the state of the Earth system. As the human enterprise becomes more encompassing and interdependent, the prospect of achieving human well-being within the dominant development paradigm grows dim. However, an alternative sustainable development paradigm that pursues social, environmental, and economic goals separately would likewise prove inadequate. Instead, we need an integrated perspective to calibrate the operation of the human system so that it remains within safe parameters for a stable Earth system. The planetary boundary framework contributes to this new paradigm by delineating a safe operating space, in terms of the degree of human perturbation of environmental processes, consistent with maintaining the planet’s stability. The urgency of the challenges ahead demands a two-prong strategy: acting within our current obsolete development framework to bend environmental and social justice curves as much as possible, while simultaneously fostering the longer-term shift in consciousness to values and institutions that equitably integrate people and planet.

Redefining Development in the Anthropocene

Human societies have for millennia faced severe environmental challenges, some of which have even triggered social and ecological collapse. Such was the fate of Mayan civilization and Mesopotamian irrigation societies, among many others. However, the scale of impact remained local or regional—until now. Over the past fifty years, the evidence has mounted of a massive shift in the magnitude and pace of human pressures on the planet. Although this “Great Acceleration” began in the mid-1950s, over the last twenty-five years, we have started to see the first evidence that critical thresholds of the Earth system are in danger of being crossed. Multiple signals sound the alert: the collapse of marine fisheries; accelerated melting of ice sheets, upwelling of warm ocean waters, and methane release from thawing Siberian seabeds; climate volatility and extreme droughts; shifts in ecological regimes in lakes caused by nutrient runoffs from fertilizers and other sources; and the collapse of tropical coral reef systems. Today, we can state with a high degree of confidence that the sheer accumulation of such anthropogenic impacts can disrupt the homeostasis of the Earth system.

Humanity has become the dominant force of change on Earth, surpassing in importance the geophysical forces that have heretofore shaped the biosphere. In this new geological epoch, often called the Anthropocene, a profound new risk can be added to the conventional concerns of dwindling resources and local pollution: human action could push the Earth system to abrupt and irreversible shifts of the planetary ecosphere. The repercussions could prove calamitous at local, regional, and global levels.

As a result, if humanity continues on its current trajectory, it will likely be unable to meet the needs of a world population that is expected to reach at least nine billion by 2050. As human biophysical pressures rise, threatening the stability of the planet, our understanding of development must transcend the current paradigm. We must urgently address the twin challenges of shrinking the human footprint and equitably sharing the limited resources and ecological space of Earth. The concept of sustainable development is key, but the oft-employed “three pillar” approach (with its separate social, ecological, and economic goals) cannot meet the challenges of the Anthropocene. First, the framework has led to a fragmented approach to the development process, where economic growth trumps natural and human capital. Second, it has failed to recognize that human-environmental interactions transcend their immediate scale of influence. Despite progress in reducing environmental impacts at local levels, cumulative global effects have increased in an uncontrolled way (e.g., relative improvements in fuel efficiency and catalytic cleaning in cars, but exponential rise in greenhouse gas concentration from overall global transport). Instead of this piecemeal approach, we need an integrated one that reconnects human development with the biosphere. Such a shift necessitates a new paradigm in which the economy is seen as a means to achieving social goals and generating prosperity within the limits of the Earth—not as an end in itself. Establishing an economy that functions as “an open sub-system of a finite and non-growth ecosystem” will require the collective effort of nations, businesses, citizens, and institutions. The goal of transforming our unsustainable economy into a steady-state economy in which energy and material throughput is stable needs to be incorporated into policymaking at all levels. Such change would not preclude growth in certain sectors (e.g., renewable energy, energy efficiency) and regions, but it would require a transition to a new, holistic form of development bounded within a stable and resilient planet. The UN Sustainable Development Goals, to be released later this year, offer an apt opportunity to start moving in this direction.

Building on decades of advancements in Earth system science, the planetary boundary (PB) approach offers a framework for keeping world development within a safe operating space. PB analysis relies on the latest research to define tolerance levels of environmental processes that regulate the stability of the Earth system.

The framework emerges from three fundamental insights. First, the advent of the Anthropocene places humanity “in the planetary driver’s seat” for determining the future state of the Earth. Second, human activity has brought the Earth system—a complex, self-regulating biogeophysical system with mutual interactions among the cryosphere, atmosphere, hydrosphere, biosphere, and stratosphere—to tipping points, where both subsystems (e.g., the Greenland ice sheet) and the whole planet can shift states in irreversible and abrupt ways. Third, the Holocene, the interglacial epoch of the past 10,700 years, is the only known state of the planet that can support the world as we know it.

The conditions of the Holocene have been propitious for social evolution, with average global temperature remaining within a narrow range of plus or minus 1ºC (1.8ºF). Although life in its spectacular diversity has existed for many millions of years, only in the Holocene does the biosphere appear in its contemporary form: rainforests, wetlands, grasslands, temperate and boreal forests, inland glaciers, polar ice sheets, fisheries, marine coral reefs, and hydrological cycles with predictable and stable rainy seasons.

The ecosystems and natural processes that underpinned the formation of early civilization crystallized in this unique era, eventually giving rise to our globalized economy. These conditions enabled agriculture to rise and flourish. Indeed, the domestication of plants occurred independently in at least five different regions between 10,000 and 7,000 BCE: wheat and barley in the Fertile Crescent; millet and then rice in China; coffee and teff in Africa; corn and beans in Mesoamerica; and taro, yams, and perhaps even bananas in Papua New Guinea.

Now, however, we have a world of 7.2 billion people (and growing), and surging human action may be disrupting the very conditions that enabled growth and development over the last ten millennia. In this context, the ethical responsibility to guarantee a universal right to development carries a scientific imperative as simple as it is dramatic: we need to preserve the conditions of the Holocene. Our current predicament is unsettling, but at least our understanding of the Earth system—especially, the hard-wired biophysical systems and processes regulating the Holocene—is increasing. These processes include cycles of carbon, nitrogen, and phosphorus; the hydrological cycle; the ocean conveyor belt that distributes heat and regulates climate; the living biosphere that regulates the climate system (and vice-versa); and the vital ice-covered polar regions that keep the planet in an intermediate equilibrium between a “hot” ice free planetary state and a “cold” snowball state.

PB theory combines scientific knowledge of Earth-system functioning, an appreciation of the virtues of the Holocene, and an understanding of Earth’s capacity for resilience along with its potential tipping points. This perspective takes into account the existence of multiple stable states and focuses on how interactions and feedbacks can cross critical thresholds, inducing a shift in the state of the system itself. The PB approach asks two overarching questions: What are the processes and subsystems that keep Earth in a Holocene-like state, and what levels of human pressure on each of these could reach a threshold, thereby disrupting the continuity of the Earth system?

To implement this analytic program, “control variables” identify the state of each PB process/system. Needless to say, establishing the critical point at which a threshold is crossed poses a difficult challenge, given scientific uncertainty and the inherently complex interactions between boundaries. Consequently, each control variable is associated not with a sharp boundary, but with a scientifically determined zone of uncertainty. The PB is then placed at the lower end of this range, a procedure consistent with the precautionary principle. In this fashion, each PB signifies a level below which the probability of crossing a threshold is low. Above the boundary, we enter a danger zone characterized by increasing risk of crossing thresholds. Finally, if the high-risk zone at the upper end of the uncertainty range were to be reached, irreversible systemic change would be likely to take place.

The boundary levels delineate a safe operating space in which humanity can operate while preserving the continuity and resilience of the Earth system. The figure displays the 2015 PB update: the green inner circle represents this safe operating space; the yellow zone, the zone of uncertainty with heightened danger of crossing thresholds; and the red areas, the zone of high risk of triggering severe dangerous imbalances.