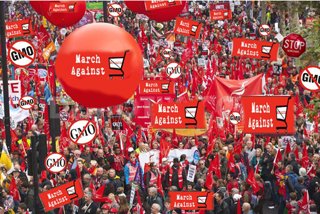 Bayer and Monsanto: a marriage made in hell

James Plested |  Bayer and Monsanto: a marriage made in hell  | October 16, 2016
Share
FacebookTwitterEmail

US agriculture giant Monsanto has agreed to a US$66 billion takeover by German chemical and pharmaceutical company Bayer. If the deal is approved by international regulators, Bayer-Monsanto will become the world’s biggest agribusiness, controlling 29 percent of the global seed market and 24 percent of pesticides.

The companies have dismissed widespread concern about the deal among farmers and environmentalists as fearmongering. Separately, they claim, their products have contributed to a significant boost in crop yields over the past few decades. Together, they’ll be able to increase investment in research and development, driving the agricultural innovation necessary to meet the demands of a growing world population.

We can only imagine what kind of new health and environmental threats may lurk in the “step change” a company like Bayer-Monsanto will make in an effort to restore profits.

Monsanto is one of the world’s worst corporate criminals.

Founded in 1901 in St Louis, Missouri, as a producer of artificial sweetener for Coca-Cola, Monsanto had its first big break in the 1930s, when it established itself as the sole US manufacturer of polychlorinated biphenyls, otherwise known as PCBs.

Monsanto’s profits soared. Evidence quickly mounted, however, that the chemicals were highly toxic and carcinogenic. As early as 1955, an internal document acknowledged, “We know Aroclors [PCBs] are toxic but the actual limit has not been precisely defined”. Nevertheless, the company continued producing PCBs until they were finally banned by the US government in 1979.

During World War II, Monsanto partnered with the US government on the Manhattan Project to produce the world’s first nuclear weapon, turning over one of their labs to the manufacture of polonium – a highly radioactive substance composing part of the ignition mechanism for the bomb.

In the 1960s, Monsanto was one of the main producers of Agent Orange – the chemical used by the US military to defoliate vast swathes of jungle during the Vietnam War. It contained a highly toxic dioxin by-product, exposure to which is associated with reproductive and developmental problems, immune system damage, interference with hormones and cancer. Millions of Vietnamese people, and many US and allied country veterans, including Australians, continue to suffer the consequences to this day.

When it wasn’t busy with chemical warfare overseas, Monsanto was waging it at home. From the 1940s, it joined a number of other companies in producing vast quantities of the powerful insecticide DDT, the environmental and health effects of which – powerfully documented in Rachel Carson’s 1962 book Silent Spring – led to it being banned in 1972.

In more recent times, Monsanto’s negative press has come mainly from its status as producer of the widely used herbicide Roundup. Roundup was first sold by Monsanto in 1974. However, until the mid-1990s its use was limited due to the fact that it killed many crops as well as weeds. This all changed after 1996, when Monsanto introduced its genetically modified “Roundup Ready” soybeans, followed by corn in 1998. Now farmers’ fields could be sprayed with herbicide without damaging the crop.

Glyphosate, the active ingredient in Roundup, is now history’s most widely used agricultural chemical. In 1987, around 5 million kilograms of it were used on US farms. Today, that figure is 136 million. A 2015 study in the journal Environmental Sciences Europe calculated that, globally, 8.5 billion kilograms of it have been sprayed onto fields. Monsanto’s revenue from Roundup and associated products was nearly US$5 billion in 2015.

This is bad news for human health and the environment. As with PCBs, DDT and Agent Orange before it, it seems glyphosate may be another Monsanto contribution to the “cancer industry”. In March 2015, the World Health Organization’s International Agency for Research on Cancer declared glyphosate a probable human carcinogen, and the company is currently defending itself against numerous lawsuits from farmers with cancer.

Given the widespread, and increasing, use of Roundup in Australia and around the world, this may be just the start.

Bayer may not boast quite the array of crimes of its US counterpart, but the sheer depravity of those it has committed is unmatched.

The company was founded in Barmen, Germany, in 1863. From its original line of business – making dyes from coal – it expanded into a chemical and pharmaceutical giant. In 1897, Bayer developed aspirin, which became the world’s first mass-market drug.

Two weeks later, it stumbled across a new “wonder drug” – a stronger version of opium which it named “heroin”. For the next 15 years, heroin was freely marketed and sold around the world as “a sedative for coughs”. Ironically, it was also often prescribed by doctors to patients struggling with morphine addiction.

During the severe economic crisis that followed World War I, Bayer merged with a number of other chemical and pharmaceutical companies to form the giant conglomerate IG Farben. In the early 1930s, IG Farben was among the biggest corporate donors to the Nazis – helping them consolidate power.

During World War II, the company was rewarded for its support with contracts for the supply of synthetic rubber, fuel and explosives to the Nazis and other Axis powers. One of its main centres of wartime production was Auschwitz. There and elsewhere, it made ample use of the slave labour of prisoners in the Nazi death camps.However, this wasn’t the darkest chapter in its alliance with Nazism. Not only was it profiting from the forced labour of Jewish and other prisoners in the camps. It was also profiting from their murder. IG Farben owned a 42 percent stake in another company, Degesch, which manufactured Zyklon B – one of the main chemicals used in the Nazi gas chambers.

After the war, the IG Farben conglomerate was broken up, and Bayer emerged again as an independent entity. Was it sorry for the direct role it played in the holocaust? Evidently not.

In 1956, Bayer appointed Fritz ter Meer as its new company chair, a role he continued in until his retirement in 1961. During the war, as a member of the IG Farben board, ter Meer played a leading role in the planning and construction of the forced labour camps at Auschwitz. On the stand at the Nuremburg IG Farben trial in 1948, he claimed that no specific harm was inflicted on workers in the camps as “without this they would have been killed anyway”.

Neither did Bayer hesitate at the prospect of getting involved again in the chemical warfare industry. In the early 1950s,it established the US-based Mobay Chemical Corporation, a joint venture with – you guessed it – Monsanto, that went on to supply one of the key, dioxin-contaminated, ingredients of Agent Orange.

Finally, in the 1980s, it was one of a number of companies selling plasma-based haemophilia treatments that infected thousands of people with HIV.

Should we trust Bayer-Monsanto with the future of global agricultural production? On balance, probably not.

The Bayer-Monsanto deal is just one among three proposed mergers among the “Big 6” global seed and pesticide giants, which also include BASF, DuPont, Dow Chemical and Syngenta. Dow Chemical and DuPont announced a US$130 billion merger in December, and earlier this year Syngenta agreed to a US$43 billion sale to China National Chemical Corporation.

In 1994, the four biggest global seed companies controlled 21 percent of the market. If all the proposed mergers currently on the table are approved, just three giant companies – Bayer-Monsanto, ChemChina-Syngenta and DowDuPont – will control 59 percent of the global seed market and 64 percent of pesticides.

In Capital, Karl Marx wrote about this process of concentration and centralisation. In the short term, it can spur technological development and productivity gains. In the long term, however, it’s part of the capitalist system’s inherent tendency to crisis.

The agricultural industry shows the contradiction. The current rash of mergers isn’t a sign of health. Rather, like the heady rush to agglomeration in the banking and financial sector in the run-up to the 2008-09 global financial crisis, it’s a sign of an industry stumbling towards its destructive limits.

Past innovation has helped boost yields to the point where the world is now experiencing a glut of many products. Prices have declined, and farmers are struggling to stay afloat.

The total income of US farmers has dropped from US$123.8 billion in 2013 to just $71.5 billion in 2016. This, in turn, has put the squeeze on the profits of companies like Monsanto, as farmers simply can’t afford to pay the high prices demanded for their products.

At the same time, it’s clear that a new wave of innovation is necessary for yields to continue to grow in the decades ahead. The possibly devastating long term health and environmental impacts of Monsanto’s Roundup weedkiller aren’t its only problem. It also, increasingly, doesn’t work. Weeds are developing resistance, and new products will be necessary to address this.

There is a kernel of truth in the Bayer-Monsanto PR spin: to sustain its business model, it needs to innovate. Innovation, however, is expensive. According to Monsanto’s chief technology officer, Robert Fraley, “Fifteen years ago, we spent $300 million on R&D. Today we spend $1.5 billion … To realise a step-change, agricultural companies will need to invest more”.

We can only imagine what kind of new health and environmental threats may lurk in the “step change” a company like Bayer-Monsanto will make in an effort to restore profits. Given the history, we can, unfortunately, expect that it will come at a high cost to human society and the environment on which we depend.