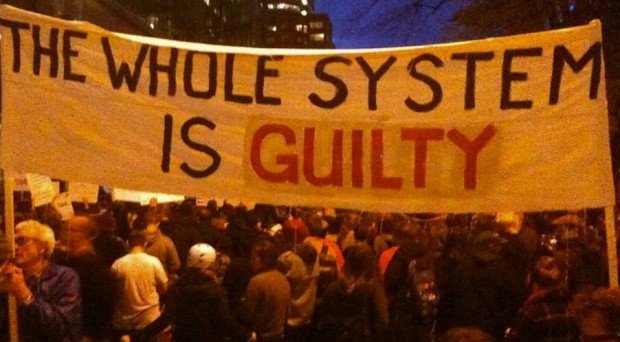 Last week, we wrote about the epidemic of neo-liberalism. This week, as major protests erupt in Canada, Mexico and Belgium, we discuss its sister, austerity. In neo-liberal economics, wealth is funneled to the top through increasing privatization of the public. This can only occur if those who are not at the top are subjected to austerity measures.

Those at the bottom are squeezed, suffer financial insecurity and the inability to meet basic needs. Rather than these realities weakening our ability to stand up, we must stand together in solidarity to take care of each other and build our power in the struggle.

Thousands are protesting austerity in Quebec. They give four reasons for austerity protests, each applies to all of us: austerity cripples public services, austerity undermines education, austerity is enforced by police violence and austerity impacts everything. Tens of thousands protested austerity in Brussels. Their two competing ideas: the government wants to reduce debt; while the people are calling for a fair tax where the wealthy pay their share.

People know the inequality created by neo-liberalism and austerity is bad, but people do not realize how bad it is.  Comedian Chris Rock has it right when he says “If poor people knew how rich rich people are, there would be riots in the streets.” Too many still believe the falsity that if you work hard you can become rich in the United States. The facts show this is false. To quote another comedian, George Carlin, “the reason they call it the American Dream is because you have to be asleep to believe it.”

But, when people mobilize they can make change and lift themselves up as a group. The fight for a living wage is one example. We were in Seattle last weekend and joined a celebration of a victory that would have been impossible just two years ago. The victory: Seattle’s Getting a Raise, thanks to the leadership of Councilmember Kshama Sawant and an independent movement that forced real change.

McDonald’s workers have been fighting for a raise for three years. McDonald’s has been steadfast in refusing. This week we saw a crack in the McDonald’s façade when the corporation announced that 90,000 of the 750,000 workers would be getting a 10% increase to $10 an hour.  This raise does not include workers at McDonald’s franchises and is inadequate, obviously not a living wage. In response advocates did not spend a lot of time celebrating but instead held protests continuing their Fight for $15.

Thousands of farm workers in Mexico struck at some 230 farms, including the twelve largest that dominate production in Baja California, interrupting the picking, packing, and shipping of zucchini, tomatoes, berries and other products to stores and restaurants in the United States. The strikers, acting at the peak of the harvest, were demanding higher wages and other benefits. We should remember where our food comes from and how we need to support sources that pay a fair wage, not poverty wages, as is being called for by US farmworkers.

Poverty wages are also a reality for the professional class. In Canada, graduate students are striking and explaining to people what it is like to live below the poverty line. We’ve seen the same kinds of protests in the United States against the corporatization of education and neo-liberalism at universities.

Destruction of Education by Neo-liberalism and Debt

The profit-making from education is evident from grade schools that become corporate charter schools through universities becoming fronts for massive hedge funds. People are protesting the corporatization of education by Governor Cuomo in New York. Billionaire hedge funders have bought the New York Senate and are cutting public school budgets and then pushing corporate domination of education.

This is a global problem. Here is a mass protest against so-called “education reforms” in Italy. And, in London students at three major universities are occupying university buildings to protest neo-liberal education.

Students are revolting against college debt – debt so large it becomes a lifetime debt that cripples their ability to participate fully in the economy. One exciting revolt against debt began as a debt strike of 15 people refusing to pay back their federal student loans. The group has now grown to 100 and threatens to continue to expand. Some of the debt strikers met with the US Department of Education. They got no answers so we expect to see student debt resistance grow.

There is a growing movement to save public education and alleviate student loans. This is likely to become an issue in the 2016 presidential election putting candidates like Hillary Clinton, who is very close to Wall Street, in the difficult position of listening to the privatization demands of hedge funders or listening to the people who want to see a fully funded public education system.

The Destruction of the Environment and Climate Crisis Demands Radical Solutions

We have regularly reported on protests across the nation against fracking, pipelines, export terminals, compressor stations, tar sands, mountain top removal, off-shore oil and nuclear energy. But, if we step back from those individual protests and look at the entire energy industry there is a good argument that nationalization of energy must become a central organizing demand. Bruce Lesnick summarizes the argument for this radical transformation:

When it comes to climate change (and other struggles), there is ample evidence that we won’t be able to accomplish what is necessary under the current economic framework. But people are instinctively leery of big changes. It’s natural to wish that we could persuade the oil companies and other bad actors to reform themselves and get with the program. It would be so much easier. But the weight of reason and historical evidence shows that to be a dead end. In such a case, and in the face of the rapidity with which climate change is spinning out of control, the rational way to proceed is to get to work doing what’s necessary, however unconventional or difficult it may seem. The demands put forward by the climate change movement should reflect this.