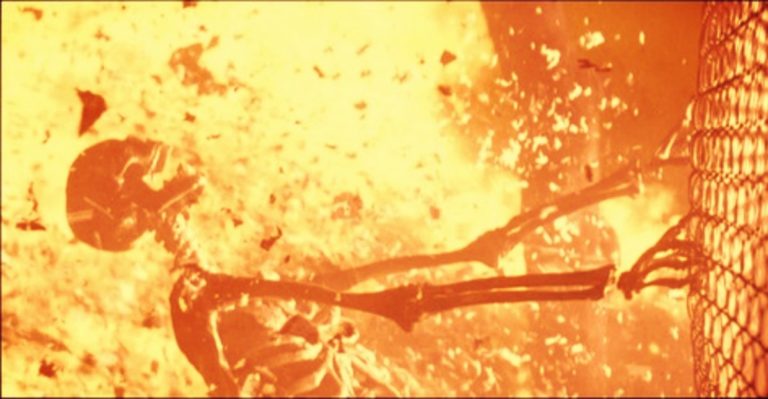 Half of all wild animals on Earth have been wiped out. You may have missed the news. It came from a scientific study mentioned on page 5 of last Wednesday’s New York Times. You had to flip past the usual stories of Trump regime scandals, four jewelry advertisements, and an ode to a slain officer from the New York Police Department.

“’Biological Annihilation’ Said to Be Underway.” The article took up only as much space as a Sootheby’s ad on the same page announcing jewelry sales in New York City.

While “biological annihilation” sounds like an evil plot thought up by a Bond villain, the term actually comes from a peer-reviewed study in the prestigious Proceedings of the National Academy of Sciences (PNAS). The authors Gerardo Ceballos, Paul Ehrlich, and Rodolfo Dirzo use it to describe the ongoing destruction of local populations within different species.

Due to the pressures of habitat destruction, pollution, and climate change, species are going extinct at 100 times the rate they normally would. The PNAS study shows that populations within species are disappearing much, much faster.

The authors take data on 27,600 land-dwelling species and map it onto a grid with 22,000 boxes, each representing a 10,000 square-kilometer area. They define a “population” as the number of individuals of a given species living in one of those areas.

They discover that wildlife numbers have declined by “as much as 50%” since 1900. The direct killers are “habitat conversion, climate disruption, overexploitation, toxification, species invasions, [and] disease.”

“[B]illions of populations” are “already gone,” they report. In other words, there have been billions of genocides, in an endless mass murder of wild animal communities over the last century. In most of the world, the researchers find, mammal populations have decreased by 70 percent.

Graveyards and graveyards could be filled with all the packs of wolves, colonies of bats, sloths of bears, and herds of giraffes slaughtered by the death machine of capitalism. Lion populations have declined by more than 40 percent since the 1990s. The number of cheetahs in the world has gone down to just 7,000. These dramatic results reinforce the findings of the 2016 Living Planet Index report, which said 60 percent of wildlife has been destroyed since 1970.

It is not just nonhumans facing extinctions. The authors write, “Humanity will eventually pay a very high price for the decimation of the only assemblage of life that we know of in the universe.” On this topic, it is worth turning to a New York article everyone seems to be sharing.

“When Will Climate Change Make the Earth Too Hot for Humans?” Written by David Wallace-Wells, a New York article asking this question has gone viral. Within days of its July 9th publication, the piece became the most widely-read in the magazine’s history.

Instead of reporting on what scientists think is most likely to happen, Wallace-Wells highlights the worst-case scenarios. He asks what could happen by 2100 if society does not take dramatic action to curtail runaway global warming.

Temperatures could rise as high as 8 degrees Celsius above pre-industrial levels, causing global agricultural yields to drop by 80 to 100 percent. It would mean “the end of food.”

Even if temperatures rise only 4 degrees, Europe’s 2003 heat wave—that killed as many as 2,000 a day—could become a normal summer. Melting arctic ice could release trapped remnants of disappeared diseases, infecting humanity once again.

It does not take much imagination to see how such results could lead to the disappearance of the whole human species. As food, water, and fuels get scarcer and scarcer, conflict could spread and the probability of nuclear warfare would rise higher and higher, with the potential to take out not just humans but most other life forms as well.

Some critics have called Wallace-Wells’s article overly alarmist, saying that his scenarios are unlikely and not really worth thinking about. I disagree. His article is largely based on reports of mainstream bodies such as the UN’s Intergovernmental Panel on Climate Change (IPCC). There are actually a variety of scientists whose predictions make the IPCC’s look downright conservative! As Wallace-Wells himself writes, the IPCC does not fully take into account a range of global warming accelerators including the melting of sunlight-reflecting arctic ice, the release of methane contained in that ice, and the die-off of carbon-sequestering forests.

The leading scientist James Hansen offers predictions more dire than some of those in the New York article. While Wallace-Wells refers to a multi-meter sea-level rise as a worst-case scenario, Hansen says that this amount (enough to submerge the world’s coastal cities) could very well occur this century as a result of just a 2-degree temperature increase. Hansen finds that when the Earth was about that hot 120,000 years ago, sea levels were several meters above today’s.

At a 4-degree rise, the amount deemed likely by the IPCC, there could be a mass die-off of 90 percent of humanity according to predictions made by the Tyndall Center for Climate Change’s director Kevin Anderson and the Postdam Institute’s director Hans Joachim Schellnhuber. Less than a billion humans would survive. Wallace-Wells does not mention these apocalyptic projections from the UK and Germany’s preeminent climate scientists.

The Climate Vulnerability Monitor estimates that 400,000 people currently die each year from global warming, most “due to hunger and communicable diseases.” The vast majority of them reside in the Global South, making them unworthy victims in the eyes of presidents such as Obama and Trump, who have subsidized and protected climate-destroying factory farm and fossil fuel interests.

There are far too many variables for anyone to know whether the already-genocidal warming levels will increase enough to actually wipe out most humans (for one thing, researchers are studying risky “geoengineering” methods such as injecting aerosols into the atmosphere, with a potential to stop some warming while creating a whole other set of catastrophes). The worst-case scenarios are worth paying attention to, not because they are certain or even likely but because they are possible. A precautionary approach entails taking all reasonable action (geoengineering not being an example) to prevent their occurrence.

Blame the Humans or Blame the Rich?

By suggesting that solutions will come from within the social system that caused the problem, both the PNAS study and the New York article fall flat when it comes to prescriptions.

The PNAS report’s authors, despite their solid grip on scientific matters, show a political naivety when they point to “human overpopulation” as an “ultimate driver” of wildlife’s destruction. One of the authors, Paul Ehrlich, has a history of blaming ecological problems on poor communities in and from the Global South. He is famous as the author of 1968’s The Population Bomb, which called for strong government agencies to regulate the number of children being born. The book opens with a contempt-ridden description of a Dehli slum’s residents: “People thrusting their hands through the taxi window, begging. People defecating and urinating. People clinging to buses…People, people, people, people.” Ehrlich has served on the board of the Federation for American Immigration Reform, a hate group falsely claiming that immigrants are a primary threat to America’s environment.

Ehrlich’s misleading analysis distracts attention from the real “enemy of nature” (a phrase by ecosocialist Joel Kovel). The real roots of ecological destruction are in domination and particularly in the capitalist system, where a business must constantly grow or else risk getting squeezed out by competitors. The profit-driven ruling class must constantly search for new commodities to produce and new ecosystems to plunder. These billionaires, not slum dwellers or immigrants, are the ones responsible for the murder of Earth.

It was recently calculated in the “Carbon Majors Report” that just 100 companies are responsible for some 70 percent of global-warming emissions since 1988. By Oxfam’s estimate, the world’s richest 10 percent produce half of all greenhouse gas pollution.

The solution, then, must involve class struggle against the ultra-wealthy. Both the PNAS and New York pieces omit this reality. With an optimism about new technological fixes, Wallace-Wells seems to think governments will voluntarily shift their course in an ecologically sound direction. He reports, “[C]limate scientists have a strange kind of faith: We will find a way to forestall radical warming, they say, because we must.” Repeatedly, Wallace-Wells uses the pronoun “we” to lump together all humans, rich and poor alike, into the same political category: “if we stop burning fossil fuels,” “should we stay the present course.” This lumping obscures key social antagonisms.

In today’s plutocratic world, a mere 5 people are as wealthy as 50 percent of humanity combined. “We” are not the problem, and no solution will come about unless the false unity implied by Wallace-Wells’s “we” is dismantled. The capitalists causing the crisis do not, and structurally cannot, care about their victims. To quote the Industrial Workers of the World, “The working class and the employing class have nothing in common.”

An organizer of the 1943 Warsaw Ghetto uprising, Marek Eldelman described “psychological difficulties” in motivating fellow Jews to resist the Nazis:

“To overcome our own terrifying apathy, to force ourselves to the smallest spark of activity, to fight against our own acceptance of the generally prevailing feeling of panic–even these small tasks required truly gigantic efforts on our part.”

Edelman found an antidote to despair by taking a “determined stand,” even when most of his community did not join in. Acting with other Jewish militants, he made sure the Nazis would face resistance and risk. He writes that the uprising “momentarily checked the Germans’ activities and went on record as the first Jewish act of resistance.”

The Standing Rock warriors and J20 anti-Trump resisters have provided a partial template for struggle against a transparently illegitimate government that shreds environmental protections. Grassroots insurrections are going hand in hand with strike organizing, commune-building, and efforts toward greater local self-reliance.

Avoiding the mere possibility of global omnicide—the murder of everything—should be the top priority of all life-loving people, even if it means stepping out of comfort zones and experimenting with something as difficult and unwieldy as “revolution.” Mainstream politicians (of course deceptively) are using that word these days, a symptom of popular desire for transformative change.

One can read all about ongoing libertarian socialist experiments in Chiapas, Exarchia, Christiania, liberated Syria, Kurdistan, and so on. Decisions are made at popular assemblies, production is self-managed by workers, and streets are kept safe by neighbors instead of police. These examples point to the possibility of a world beyond states, white supremacy, heteropatriarchy, and private property. A world where power has been taken back from the ruling class.

In these struggles, an ecological consciousness is developing, informed by local traditions and by modern thought and science. For example, a 2016 statement by the Zapatistas promises to “pay respect to mother earth and continue walking with and upon her.”

Words about these struggles cannot fully capture their essence, and there is no substitute for direct personal experience. Direct action has an infectious quality that some 1960s civil rights campaigners called “freedom high.” It is what made Occupy rapidly spread from New York to the rest of the country and what made Black Lives Matter gather momentum until it became a formidable political actor.

Dan Fischer is a member of Dragonfly Climate Collective (affiliated with Rising Tide) and Industrial Workers of the World-CT. He can be reached at dfischer@riseup.net.