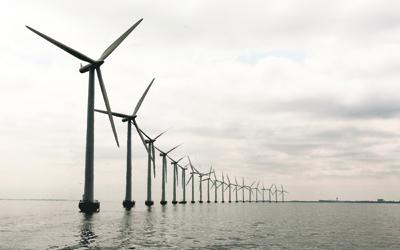 The Answer is Twisting in the Wind

Environmentalists see a devil and an angel on Governor Andrew Cuomo’s shoulder and it appears both are getting their way when it comes to New York’s energy future — although one will have to be more patient than the other.

At the behest of state energy regulators in July, the Long Island Power Authority (LIPA) delayed plans to approve a wind farm expected to be built 30 miles off the shore of Montauk at the far northern end of Long Island. With 15 turbines producing 90 megawatts (MW) of electricity, the project, built by Deepwater Wind LLC, would be the most sizable of its kind in the United States, which has lagged significantly behind Europe in developing offshore wind resources.

“We’re looking at this and seeing a tremendous offshore wind resource that will be developed and it’s not the last,” Thomas Falcone, the utility’s chief executive officer told the Associated Press a week ahead of the scheduled vote. “[T]his is a very big step for New York, but also for the U.S.”

From Virginia to Maine, the Eastern seaboard has the potential to harness 240,000 MW of offshore wind, nearly 40,000 MW of which blows off Long Island’s coast, according to research by the New York Energy Policy Institute and Stony Brook University. Deepwater Wind’s farm will only generate a fraction of what is possible but environmentalists see the plan as an important move toward weaning New York off of polluting energy sources like gas, coal and nuclear.

“It’s going to help to open the door here to offshore wind power,” said Kim Fraczek, of the New York-based Sane Energy Project. The group hopes the project will lead to more turbines, including some off of Long Island’s southeastern shore, where Sane Energy won a hard-fought campaign last year to block a natural gas terminal and is now advocating for construction of a 750 MW wind farm in its place.

The state’s Energy and Research Development Authority, chaired by Cuomo-appointed energy czar Richard Kaufman, intervened last month and requested that the LIPA delay approving the Montauk wind farm until the state releases an offshore wind master plan in August. It was the second time this summer the LIPA put off voting on the wind farm, which was originally expected to be greenlit in June.

The Deepwater Wind farm might be in need of CPR after the bureaucratic hold up, but Cuomo is breathing new life into geriatric nuclear reactors upstate, currently hemorrhaging money for their operators.

When the New York Public Service Commission approved new clean energy standards on August 1, it included a provision that will force the state’s power utilities to purchase $7.6 billion worth of electricity over the next 12 years from the R. E. Ginna and Nine Mile Point nuclear plants operated by Exelon Corp, as well as Entergy’s James A. FitzPatrick nuclear facility.

Cuomo, who sought the bailout for the struggling plants and tied it to plans for New York to receive 50 percent of its energy from renewable sources by 2030, praised the commission’s decision. Electrical providers, forced to buy nuclear power at above-market rates, are going to “pay for the intrinsic value of carbon-free emissions,” Cuomo said in a statement.

Ratepayers will ultimately be the ones picking up the tab, however, as utilities pass on the cost of electricity from nuclear power to consumers.

Critics also observe that while carbon emissions from nuclear plants are minimal compared to those burning fossil fuels, the process of mining and enriching uranium required to power reactors is carbon-intensive. The plants emit radioactive chemicals into the environment as a matter of daily operation, produce large amounts of toxic waste and present a safety risk to the public, as evidenced by the 2011 Fukushima disaster, which only increases as they age.

“These plants are old and decaying,” said Fraczek. “[The bailout] is a giant slap in the face to the public.”

Her hope is that plans for the wind farm off the coast of Montauk will eventually move forward and pave the way for more ambitious projects, including the 750 MW wind farm Sane Energy wants built off the coast of the Rockaways in Queens.

“The only way our state is going to truly meet its renewable energy goals is with offshore wind,” she said.

The Indypendent is a monthly New York City-based newspaper and website. Subscribe to our print edition here. You can make a donation or become a monthly sustainer here.