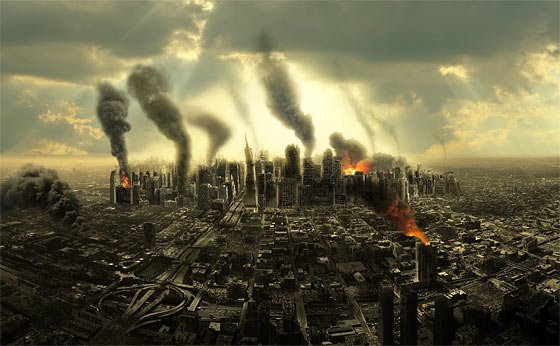 This article is an attempt to chart what might happen in terms of climate change, both in terms of science, and particularly the potential politics, if we see a serious financial collapse followed by further contraction due to peaking energy and resources. Despite this being quite a likely scenario, there is barely anything written on the topic.

Peak oilers, often end up thinking that we don’t need to worry about climate change because peak energy will take care of it for us. I think this view is strongly mistaken. While it is true that peak energy leads to less emissions than would otherwise be possible,[1] we still end up in the zone of highly likely runaway climate change, and there will still be much that needs doing on an activist front in order to minimise our risk. On the other hand, climate change activists are often blind to the possibility of financial collapse or even peak energy collapse. Accordingly, I think their strategies are based on business as usual continuing, which I don’t think is realistic.

Climate change activists tend to already know that their hopes to create a mass movement that will convince governments to act, and act enough, are likely to fail, but it’s a long shot worth fighting for if the current context is all you have to go on. What I’m offering below is simply an alternative long shot, one I think is more likely to succeed, considering it is based more on the short term interests of the population rather than long term interests, which are harder to get people active on.

Below is a brief analysis of what financial collapse means for the climate, followed by an analysis of potential political scenarios, and particular detail on what I see as the most likely strategies to create a safe climate. These include a decentralised movement to reduce greenhouse gas concentrations, emphasising a shift to permaculture and appropriate technology, the continuation of the anti-emissions movement, a mass movement mobilising to take what’s left of our industrial capacity out of the hands of elites, and put it into good use drawing down carbon, remediating the planet and providing for our needs. This scenario could definitely be seen as an unlikely long shot; however, considering the situation we find ourselves in, a long shot is much better than no shot.

Emissions in a Financial Collapse

The coming economic collapse, will be global, and will result in the total breakdown of our banking system.[2] A similar thing happened during the Great Depression in the USA, where emissions dropped by 36% between 1929 and 1932.[3] The current financial bubble is, however, much larger proportionally than the one preceding the 1929 crash. Additionally, the greater complexity and brittleness in our economic system – for example, a greater reliance on global trade, a far greater interconnectedness in the banking system, and just in time manufacturing and distributions systems – also mean that it is likely that the breakdown in the system will be a lot more severe than that of the Great Depression.

Unfortunately, as far as I can see, there aren’t any analyses online of greenhouse emissions in a financial collapse. I do know that Nicole Foss, the leading thinker behind the financial collapse scenario, believes emissions would drop a very long way though.[4] So, while it’s just a guesstimate, I’m going to suggest a drop in emissions of 60% over the first three years.

Financial Collapse and the Climate Science

The latest Intergovernmental Panel on Climate Change (IPCC) report includes a section titled ‘What Would Happen to Future Climate if We Stopped Emissions Today?’ which is quite useful for our purposes.[5] It’s not quite the same as a financial collapse scenario, but an approximation based on it is probably better science than what I could manage on my own.

In the graph above, the Zero Emissions scenario shows a sharp increase in temperature by about 0.4° C immediately after emissions are cut. This is due to the effect of Global Dimming largely disappearing,[6] minus the effect of the short term gases being cut.[7] In the financial collapse scenario, the rise would be approximately a quarter of a degree,[8] and wouldn’t be as steep since the cut would be spread out over three years. There is definitely a risk here that this rise in temperature could trigger one or more of the climate tipping points and take us to runaway climate change. I think, for this reason, it makes sense to focus as much activity now on drawdown (more on this below) as well as reducing emissions, as is humanly possible. Without a global agreement we probably can’t do much, but there is a role for individuals, activist groups, businesses and farmers to do what we can.

The long term decline following the sharp rise is due to ocean and land uptake of CO2 and the removal from the atmosphere of other greenhouse gases. The graph shows the temperature in 2150 being 0.1° lower than it was in 2010.

This is interesting, since most analyses suggest that we are committed to 0.6° warming,[9] as well as the 0.85° of warming we’ve seen so far.[10] It turns out that the 0.6° we’re committed to is assuming that concentrations of gases remain constant,[11] which in a collapse scenario they wouldn’t. I can’t quite figure out why, but in this graph, it looks like only 0.3° is ‘locked in’ with constant forcing, while on the same page, they reference the 0.6° figure. Regardless, my point is that without ongoing emissions, (if we don’t reach any climate tipping points, which some argue we already have[12]), rather than going up by 0.6°, the temperature is likely to actually go down, very slowly and not by very much, but still, not up. The implication is that oceans and land systems removing carbon dioxide would have more of an effect than the lag in warming.[13] This would be a key thing to understand – if this is the case – in order to sort out the potentials of our predicament.

I can see four different kinds of political scenarios being possible in a post-financial collapse world. Different scenarios would likely play out in different places; however if we are to solve climate change, we would need to work towards a global transition to the scenario I’m going to call Utopia.   My scenarios are loosely based on David Holmgren’s four energy descent scenarios,[14] although not quite the same.

The first, and perhaps the default scenario, is Brown Tech (one of Holmgren’s scenarios). If we don’t act, this is what we’ll get. In terms of energy use it’s just a continuation of what is already happening – more and more unconventional and dirty fuels, including deforestation for wood burning, and coal to liquids as well. In terms of politics, again it’s a continuation of what is generally happening: governments become heavier-handed, and shift towards authoritarianism/fascism in an attempt to keep the population under control. Some group – probably migrants – are scapegoated as the reason for the economic crisis, deflecting blame from the government and capitalism. In a Brown Tech scenario, those of us who care about climate change and other environmental and social justice issues are likely to be marginalised or worse, and our attempts at changing things will always be fought from the back foot. It’s not a scenario where we can have much hope of creating a safe climate.

My second scenario is Revolution. I think it’s entirely likely that the fall from affluence in the minority world[15] will create revolutionary movements. People will be angry, and they are likely to take it out on their government, banks, and perhaps capitalism at large. This is exactly what the Brown Tech scenario is trying to prevent (and is why big corporations financed the Nazis).

Unfortunately, I don’t think this movement is likely to have climate change as one of its driving forces. We can try to argue for it if this is the way things go, but at present I don’t think we’re going to win over a mass movement on the basis of climate change since action on climate change is not in the short term interest of the population. I know that’s cynical, but I think it’s realistic. A democratic mass movement for radical change post-collapse will be focused on resecuring lost affluence, not on the environment. For example, SYRIZA, the second most popular party in Greece, a far-left coalition (I know they’re not revolutionary, but it’s the closest example available), lists as one point of their 40-point program: ‘Preference for renewable energy and defence of the environment.’ They don’t mention climate change; they would probably build renewable energy if they needed more energy, but they’re not talking about stopping fossil fuels at all.

If it is a truly democratic revolution, then at least we’ll have a better chance of arguing our case than we do now in a situation where fossil fuel companies and the economy at large essentially hold governments to ransom. One can never know ahead of time the outcome of a revolutionary movement though – it’s just as likely, if not more likely, that we would end up with less democracy than we have now.

The third scenario, another of Holmgren’s, Lifeboats, is the situation where society completely breaks down. Essentially Mad Max or The Road – a world of brutish survivalism, gangs and environmental collapse. Obviously we don’t want this scenario either. The only thing we can do in this scenario is hide out and attempt to preserve whatever aspects of technology and culture we can for a future renaissance after energy descent and the climate have hopefully stabilised. Although it’s possible, I don’t think Lifeboats is very likely to occur just through financial collapse. People are generally quite capable of grinning and bearing their lot before turning on each other. Either of the above scenarios will most likely (if we do nothing) degenerate into Lifeboats though, as climate change and/or peak energy end up meaning that centralised government is no longer able to provide for people, or even hold together.

In terms of the climate and the environment, the Lifeboats scenario is mixed, but overall not good. Industrial capacity, and with it most fossil fuel use, would largely grind to a halt. However, the end of centralised management of industry might also mean nuclear plants melt down and fossil fuel mines slowly leach chemicals into our waterways. In the short term we would see massive deforestation for burning of wood; however, in the long term there would also be a large drop in population, which would probably mean large scale reforestation and drawdown of that element of carbon dioxide in the atmosphere that is there from land use change.

In any of the above three scenarios, since no serious action has been taken, we’ll most likely end up with runaway climate change.

The last scenario I’m going to call An Ecological Society. An Ecological Society is a mix of Holmgren’s two scenarios which are explicit responses to climate change and peak energy. These are Green Tech – which is a sensible egalitarian and environmentalist top-down medium and high tech response, and Earth Steward – which is a decentralised, permacultural, low-tech, bottom-up response. In my assessment, I don’t think Green Tech is particularly politically likely to come about post-financial collapse, and Earth Steward isn’t capable on its own of dealing with the mess we’ve made environmentally. The rest of this article will be concerned with how we get to An Ecological Society and a safe climate.