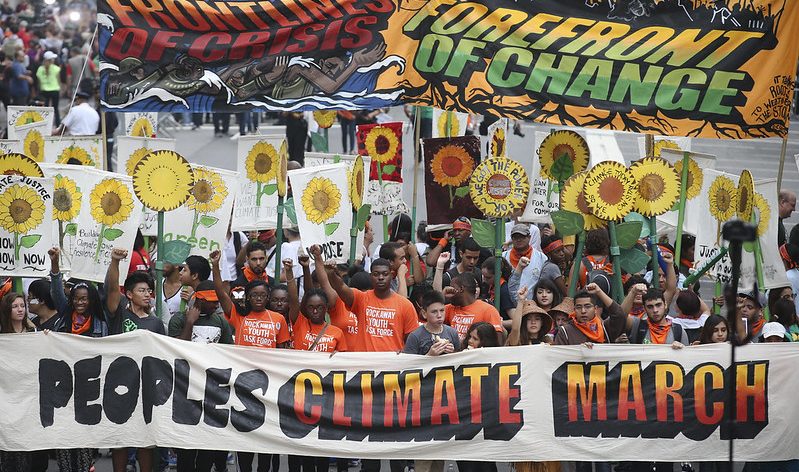 After the People’s Climate March, it’s time to ask for more

The 400,000 people who packed Manhattan’s Central Park West for the People’s Climate March on September 21 have all gone home to their apartments, farms, cabins and lobster boats. They’ve returned to Pine Ridge Indian Reservation and the Wet’suwet’en territory in British Columbia, to the Philippines and the Pacific Islands. The “U.N. Climate Summit” banner that, last week, formed the backdrop for the impassioned speeches of 120 heads of state — and Leonardo DiCaprio — has been taken down. Debate in the newly renovated General Assembly Hall has turned to terrorism — a different kind of security threat than that posed by drought and rising sea levels. The metal barricades erected against protesters who flooded the heart of global capitalism at last Monday’s Flood Wall Street demonstration have been cautiously removed by the New York Police Department. Frostpaw the polar bear has gone to jail.

The summit convened by U.N. Secretary-General Ban Ki-moon, which served as the inspiration for the People’s Climate March and Flood Wall Street, occurred ahead of conferences scheduled for Lima in December and Paris in 2015, where new long-term agreements for reducing greenhouse gas emissions will be hammered out. If we are to believe 98 percent of the world’s scientists, the future of human subsistence on this planet hinges on the strength of the pacts world governments will forge. Precious time will tell what the lasting impacts of the demonstrations will be, but already the protests that shook New York and much of the world (there were over 2,000 People’s Climate Marches globally) appear to have left their mark upon upper echelon spheres of power.

The day following the march, the heirs to John D. Rockefeller, the famed 20th century oil baron, announced they were divesting their $860 million charitable fund from fossil fuels. Addressing the United Nations last Tuesday, President Obama referenced the demonstration, stating, “Our citizens keep marching. We cannot pretend we do not hear them.”
While it might seem like another toothless remark from the president, it at the very least shows that the commotion two days earlier penetrated power’s inner sanctums.
“Often times, what we hear from politicians is that we don’t have the numbers, that people don’t care,” said Phil Aroneanu with 350.org, the environmental organization that helped spearhead the march with thousands of labor, faith and environmental justice groups. “With 400,000 people on the streets Sunday we really feel like we proved otherwise.”
The march was particularly a success, Aroneanu noted, in that it broke down color barriers for an environmental movement that for the past several decades has been highly segregated between white and wealthy and low-income racial minorities.
“Though we still have a long way to go, it was the most diverse of any march we’ve organized so far,” Aroneanu said. “Our partners in the climate justice movement really showed up and took on leadership roles. We have to make sure we are not leaving any of our brothers and sisters behind.”
The climate march, more than any other mass mobilization before it, reflected the faces of those who bear the brunt of climate change.
“Communities of color and indigenous groups — from hurricane stricken areas in the Gulf Coast through the Atlantic seaboard, to black farmers in middle America, to indigenous lands being mined for coal, and beyond — came together in New York for the People’s Climate March,” said Jacqui Patterson with the NAACP’s Environmental and Climate Justice Program.
You will find detractors few and far between those who participated in events in the streets last week, including myself. I sat on the coordinating body for the march early on, helped organize more than a hundred teach-ins and skill-shares ahead of the mobilization, and played a role planning Flood Wall Street. Yet, up until the day of the climate march, it was unclear whether it would be a drop in the bucket or a splash in the face of apathetic world leaders. Protesters with System Change Not Climate Change marching along Central Park West. (WNV / Peter Rugh)
A growing anti-capitalist strand of the climate movement was successful in using the march and the buzz around it as a springboard to ask for more — for the entire planet back, in fact. Best-selling author Naomi Klein’s new book “This Changes Everything: Capitalism vs. the Climate” was released in September — timed to coincide with the march. It sharply articulates a brewing discontent and lack of faith in our current socio-economic system’s ability to manage the climate crisis.
“If we had acted in 1988 or 1990 or 1992 it is possible there could have been a reformist path to get off of fossil fuels,” said Klein, who spoke at a packed St. Peter’s Church on the eve of the march, as part of a series of events members of SCNCC helped organize. “But we didn’t. Our emissions are up 61 percent.” Drawing on scientific research, Klein argued that if “we want to avoid catastrophic warming, we now have to reduce our emissions in the Global North by between 8 and 10 percent a year” — a fact that’s incompatible with the logic of perpetual growth inherent in our competitive, profit-based, global economic system.
While the march’s call for “a world safe from the ravages of climate change” was broad enough for the Climate Group — a non-profit funded by Duke Energy, News Corporation and Goldman Sachs among others — to endorse, the Flood Wall Street protest carried Klein’s message to the barricades, taking aim directly at the likes of Goldman Sachs and other investment firms and commercial banks that fund fossil fuel extraction. Rather than framing their action in opposition to the march, Flood Wall Street organizers formed a contingent in the parade of bodies that poured past Columbus Circle on on the day of the march, using it as an opportunity to promote their politics and to recruit participants for the direct action on Wall Street the following day.
Social media statistics reflect the success of this tactic. #PeoplesClimate, the hashtag for the march, generated 334,820 original tweets according to statistics provided to me by Mark Provost of U.S. Uncut. Although the number of participants in the anti-capitalist direct action on Monday was fewer by a factor of ten, Flood Wall Street generated 154,138 original tweets, about half as many as the march it used as a springboard. The fact that the Flood Wall Street’s march started at 9 a.m. on a Monday — a time when most people are arriving at work — certainly reduced the number of participants, but Twitter highlights the pervasiveness of the sentiment they conveyed.
Flood Wall Street expressed a systemic analysis along with the ecstatic, angry and creative energy shared by many of the ground level staff and volunteers who canvased, made phone calls, and painted banners for the People’s Climate March, and who felt stifled and left out of the decision making process by the large the NGOs. Flood Wall Street protesters ignore police warnings and wait to be arrested. (WNV / Peter Rugh)
Two thousand people sat down around the famous statue of the bull near Wall Street and to everyone’s surprise, no initial arrests were made. We were allowed to stay put for several hours, paralyzing vehicular and foot traffic in the Financial District for much of the day. The reasons for the hands-off approach of the police are many fold, and are in part due to Mayor Bill de Blasio not wanting the violent stigma that clung to his predecessor over his repressive dealings with Occupy Wall Street. It didn’t hurt either that there were simply too many people taking part for the NYPD to apprehend everyone.
Unlike so many acts of civil disobedience that show the moral courage of a few, but often wind up highlighting the power of the state over our lives — in the form of participants being handcuffed and led away to jail — we succeeded in using large numbers of people to display our collective power over the state. This was extremely empowering. Rather than reactionary anger at police violence setting the tone of the demonstration, we set the tone ourselves, standing at the mouth of Wall Street chanting “I believe that we can win!”
Hindsight is always 20-20 and perhaps we could have used the leeway the authorities showed us to call for supplies and reinforcements, to hunker down in the middle of Broadway, at least until the U.N. Climate Summit was over. Instead, the action ended with police apprehending the hundred or so of us who stuck around — including Frostpaw the polar bear — and who ultimately disobeyed the final dispersal order at 7 p.m. There simply was no contingency plan drawn up for what would happen if the police did not start arresting us right off the bat, which led to a bit of confusion. The following day, de Blasio, like President Obama in his U.N. address, indicated his support for our concern regarding climate change. Though he predictably said nothing of the anti-capitalist politics that characterized Flood Wall Street, he told reporters that he believes “first amendment rights trump traffic.”
To many activists here in New York, these remarks signal a moment to go on the offensive — a chance to be more daring with less risk of reprisal. Yet, the question of how best to escalate the struggle for a just and sustainable planet is not just for those looking back on Flood Wall Street and the People’s Climate March, but one that confronts all of us moving forward. It is a task that, after this watershed moment, participants have carried back to the boroughs, cities and towns from which they came. Climate change presents the human race with the possibility of extinction, of reaching a bitter end, but from what I witnessed on the streets of New York, we are on the verge of a new beginning. The only future we will have will be the one that we have demanded. And the only possible world left for our children, is the one that we will have wrestled from the hands of those who are poisoning the present.