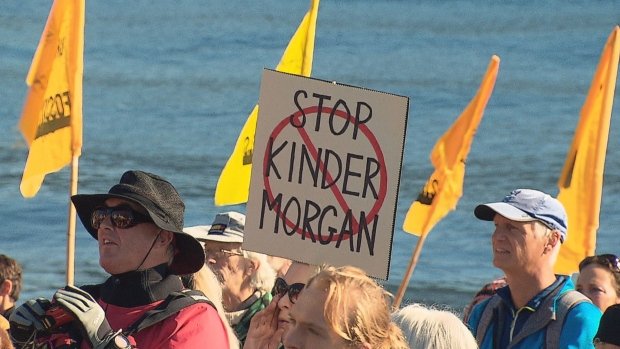 More than 60 boats linked together in front of the tanker route which runs from the terminal. 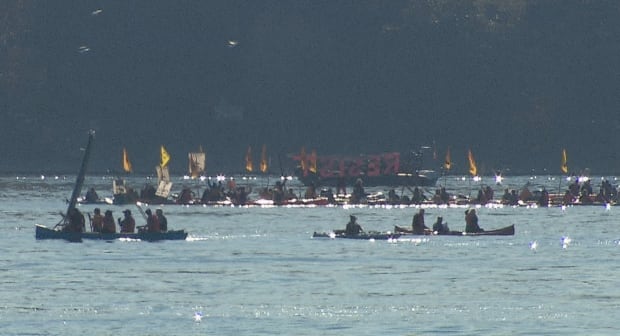 Five people were arrested for mischief after 60 boats linked up near the tanker route running from Kinder Morgan Canada Ltd.’s Westridge terminal in Burnaby. They were later released. (CBC)

First Nations along with environmentalists, local politicians and residents are continuing their protest of the company’s expansion of its Trans Mountain pipeline, which runs from Edmonton to Burnaby.

The federal government has approved the $7.4 billion project.

The proposed expansion of the Trans Mountain pipeline from Alberta would nearly triple its capacity to 890,000 barrels per day and significantly increase crude tanker traffic off the West Coast.

Still environmental and aboriginal groups have filed for a judicial review that could overturn the project’s federal approval.

The concern from protesters is the threat of an oil spill in Burrard Inlet.

“It’s a risk that we cannot take,” said Rueben George with the Tsleil Waututh Nation at the protest on Saturday, one of several he has attended and spoken at.

On Thursday, Kinder Morgan appealed to the National Energy Board, saying the City of Burnaby has failed to issue construction permits for the expansion.

RCMP said the five people arrested as part of the protest on Saturday were released, but will have to appear in court at a later date.

​With files from Maryse Zeidler and Johann Nertomb.