Your Personal Consumption Choices Can’t Save the Planet: We Have to Confront Capitalism 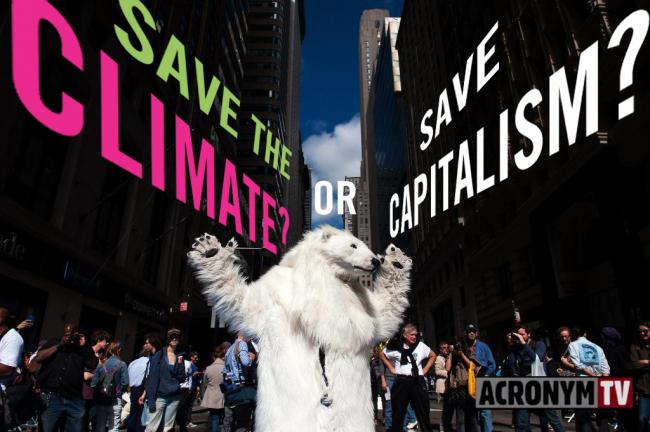 To stave off disaster, we must transform the economic system driving climate change.

New York Magazine’s latest 7,000-word cover story about climate change freaked a lot of people out. Like the reality of climate change itself, the story is depressing. Author David Wallace-Wells—collating several academic papers and interviews with climate scientists—meticulously lays out the possibility of melting ice caps releasing literal plagues, our air becoming unbreathable and geopolitics devolving into endless war.

The response among climate wonks took a few different forms. Climate writer and meteorologist Eric Holthaus pointed out a series of factual errors in the piece on Twitter, and The Atlantic’s Robinson Meyer detailed several points where Wallace-Wells’ narrative diverges from accepted science. Scientists like Michael Mann argued on Facebook that the article leaned too heavily on doomsday scenarios, barraging readers with scenes that Wallace-Wells himself states are unlikely to come to pass. “The evidence that climate change is a serious challenge that we must tackle now is very clear,” Mann wrote in a Washington Post response to the story. “There is no need to overstate it, particularly when it feeds a paralyzing narrative of doom and hopelessness.”

The debate about the article has also orbited around the question of whether fear is an effective motivating factor in getting people to try to change things, which—however you feel about the piece—clearly needs to happen. Environmental scientist Jon Foley said no, and called Wallace-Wells’ storytelling “deeply irresponsible.” David Roberts at Vox counters that fear shouldn’t be avoided: “It may be that there are social dynamics that require some fear and paralysis before a collective breakthrough. At the very least, it seems excessive to draw a pat ‘fear never works’ conclusion.”

Less discussed in the aftershock of New York Magazine story has been exactly what kind of response fear provokes, whether in individual people or the institutions they belong to.

Like almost everything else, our reactions to fear—climate-based or otherwise—have been conditioned by 40-plus years of neoliberalism. Shortly after September 11, 2001, George W. Bush advised a reeling U.S. public to “get down to Disney World.” As the recession loomed, he told us to keep shopping. That proposed solutions to the climate crisis have taken a similar tone isn’t surprising. For years, mainstream climate activism centered around changing lightbulbs and riding more bikes. Shop green, in other words, and the earth will follow.

That’s started to shift, thanks to movements like Occupy Wall Street and hard-fought battles by indigenous activists, joined by a younger and more militant generation of environmentalists. Pushes to stop the Keystone XL and Dakota Access pipelines, and to divest from the banks that finance them and the companies that build them, have injected environmentalism with an anti-corporate spirit, predicated on collective action.

But a mainstream gravitation toward individual solutions remains. After the New York Magazine piece was published, a battery of articles—some new, some old—started cropping up on social media feeds detailing things you can do about the climate crisis. Many of the new stories talked up a recently-released Environmental Research Letters study about the four “most effective things” individuals can do about climate change: stop eating meat, avoid air travel, don’t have a car and—at the top of the list—have fewer children, or none at all.

Consumption choices do matter. They just happen to matter a lot more if you’re in the one percent, and especially the top 0.01 percent. “If some earnest Gen X climate activist cancels the family vacation to see the grandparents over carbon guilt, the Earth is not going to give a damn,” Roberts writes, “What will matter is if a business executive decides to fly back and forth from New York to London once a week instead of twice, or once a month instead of weekly. And it will only matter if all the wealthy travelers make the same decision, consistently, over time.”

“The obvious and most direct approach to addressing the role of individual choices in climate change is to tax the consumptive choices of the wealthy,” he adds. “For now, and for the foreseeable future, carbon emissions rise with wealth. Redistributing wealth down the income scale…reduces lifestyle emissions.”

If you’re not rich, Roberts concludes, the best thing you can do for the planet is get together with other people and try and change policy and elect people to office who aren’t in bed with the fossil fuel industry, among other things. Thinking about lifestyle choices really only makes sense, then, if you add an understanding of class politics into the mix.

To really get this, it’s important to state just how skewed responsibility for the climate crisis—like most other societal crises—really is. A Carbon Majors Report recently found that just 100 companies have been responsible for some 71 percent of global emissions since 1988. 71 percent.

This stands at odds with the story we normally hear about climate change. Warming is a civilization-wide problem, we’re told, and the result of a public obsession with consumption: a collective failure. The remedies floated to this failure are individual, whether recycling more or driving and procreating less. A globalized version of this tale—that’s gained currency among many on the green left—envisions a massive scale-down in our collective production and consumption called “de-growth,” whereby the sacrifice is shared but so too are the gains of a more sustainable ecosystem: austerity for the common good.

As the Carbon Majors Report underscores, though, we arrived at the place we are now thanks to the actions of a small and incredibly wealthy substratum of the population and their control over the economy’s modes of production, which define how we live and work and consume. Many people worldwide and in our own country simply don’t consume enough for their lifestyle choices to matter. As climate scientist Kevin Anderson puts it, “By the time the poor have sufficient income to use lots of energy, the transition to a low-carbon energy system will need to have been completed.” That we’re all somehow failing to do our part is a convenient narrative to the small minority of people who are actually responsible for fueling this crisis. Climate change is already hitting the people who’ve contributed least to it, and whose living standards and levels of consumption should increase rather than decrease.

“Eco-consumerism may be able to expiate your guilt. But it’s only mass movements that have the power to alter the trajectory of the climate crisis,” Guardian writer Martin Lukacs argued this week. “This requires of us first a resolute mental break from the spell cast by neoliberalism: to stop thinking like individuals.”

As Lukacs also points out, the powers at be—and the four-decade ideological project that put them there—won’t make this task easy. Collective action is going to have to do a lot of work over the next several years. One obvious challenge is getting people to respond to the threat of climate change together, in numbers large enough to make the problem unavoidable for the federal government. That in itself is a plenty steep task considering the party line of the ruling elite is straight-up denial. The one thing the Democratic and Republican establishments seem to agree on is the need to keep budgets small and government intervention to a minimum.

On the other hand, it is vital to ensure that the way states respond to this crisis doesn’t leave the people already most vulnerable to it worse-off.

Global North governments don’t have a terribly good track record of responding to crises from the perspective of human rights and general wellbeing. Whether in creating crises or capitalizing on them, governments’ responses to fear leave a lot to be desired. As Bush was telling fear-stricken Americans to go out and shop the pain away post-September 11, members of his administration were also engineering the ‘war on terror’ and one of the most aggressive scale-backs of civil liberties since the Red Scare. Hurricane Katrina cleared the way for massive displacement and a wholesale privatization of the city’s school system, but not before the Department of Homeland Security and Louisiana governor authorized Blackwater to shoot and imprison New Orleans residents at will. A post-storm culture of impunity combined with heavy police and military presence, as well as armed vigilantes, turned many parts of the majority-black city into a death trap for African Americans. A white man named Paul Gleeson was caught on tape bragging to New Orleans police about having shot thirty-eight people he suspected of being looters, telling the officers that he had given the bodies to the Coast Guard.

As was the case after September 11 and Katrina, the people worst-hit by these kinds of natural disasters are most harmed by government failures in the aftermath. This dynamic disproportionately impacts people of color and the working class. What’s to make us think that an openly xenophobic Trump government will yield results that are any different? Ginning up a fear-based politics in the context of an ascendant far-right is a recipe for an entirely different kind of disaster.

University of Pennsylvania sociologist Daniel Aldana Cohen wrote of Wallace-Wells’ piece that, “The actually realistic danger zone is a combination of too little decarbonization, too late, in the context of hardening inequalities of class, race, and gender — in short, eco-apartheid. Those brutal inequalities, and the bullets that maintain them— not molecules of methane — are what will kill people.”

On top of a starker social climate, Aldana Cohen notes that seemingly quick-fix, technological solutions (spraying Snowpiercer-style chemicals into the sky, for instance) become all the more likely the closer we get to 4 degrees.

“Is it true that virtually everyone grossly understates the dangers posed by climate change? Yes. But is the gravest threat pure runaway climate change? No: it’s too little, too late, plus race and class war, plus experiments with the planet,” he continues. “It’s the danger, essentially, of a vicious right-wing minority imposing the privilege of the affluent few over everyone else.”

In short, we need to do much more than cap emissions to make sure the next century is marked by anything other than increasingly cruel and militarized borders and cities. Dealing humanely with the kind of warming already locked-in and avoiding warming even worse than that will mean a wholesale transformation of a political economy that includes everything from fossil fuels’ dominance to mass incarceration. Where movements can make inroads on some of these fronts, it’s hard to upend neoliberalism’s dominance without taking state power.

There’s no one-size-fits-all answer for how to get it, of course. But the physics on climate change mean that many of the require a multi-racial, low-carbon, populist platform aimed at providing jobs and basic economic security for all Americans. The Labour Party’s surprisingly popular manifesto in the United Kingdom—the one that brought them within striking distance of controlling Parliament—contained calls to bring energy utilities under public ownership and ban fracking. Contra the austerity politics of Republicans and greens alike, a counterpart here could propose a program for full employment or redistributing funds from polluters to the communities they’ve poisoned or even nationalizing electric utilities. The lives of one percenters may get worse as we scale back emissions, but the 99 percent’s can get a lot better.

Framing climate change in terms of fear—as Wallace-Wells’s piece does, unfortunately—means waging the fight against it on the right’s terms, ones that will likely come up perilously short given the scale of transformation required. The Left can win by presenting a vision for a fairer world. And it might well be the best shot humanity’s got. 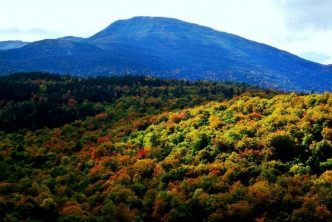 Humankind Has Halved the Number of Trees on the Planet 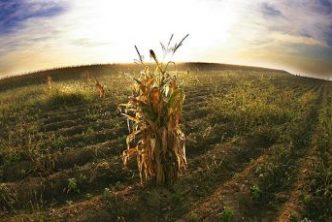 What would it take to mainstream “alternative” agriculture? 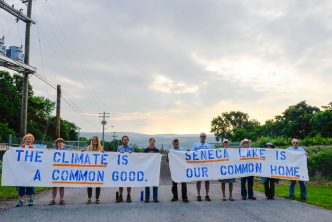 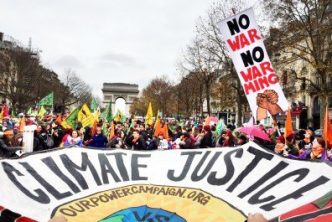 Organizing on a Sinking Ship: The Future of the Climate Justice Movement