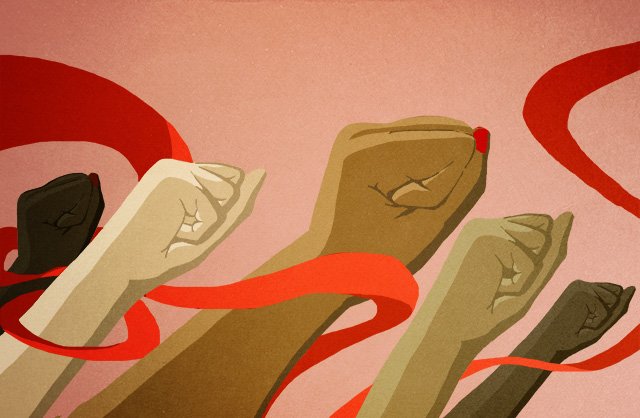 Women Worldwide Strike in the Name of Intersectional Feminism

Today, on International Women’s Day, in 30 countries around the world, women, femmes, gender nonconforming people and male supporters, will march, rally, take a day off their paid jobs and hold vigils.

When millions of women and men flooded the streets on January 21 to protest the openly misogynist and backward views of the country’s 45th president, there was an important undercurrent of dissent and contestation within the mobilizations themselves. Numerous news stories, Facebook posts and Twitter feeds revealed the concerns and criticisms many Black women, women of color and trans women had of the politics of the January 21 march early on: its initiators inadvertently co-opted the name of an early women’s march organized by Black women; the original conveners were strikingly homogeneous; and the message did not reflect the concerns of a wide variety of women, including immigrant, low-income, Black, queer and trans, disabled, Arab and Muslim women. Through a process of public criticism, private negotiations and the intervention of several movement elders, the tone, tenor and leadership of the women’s march in Washington, DC, and many of its sister marches, shifted in a more progressive direction. Three women of color became co-conveners, and legendary Black feminist prison abolitionist Angela Davis was a featured speaker.

For most who attended the January 21 events, the outpouring of creative, irreverent and colorful anti-Trump opposition was exhilarating. The lingering question has been, what comes next?

This is the context for today’s mass day of action. This day of action represents a confluence of two organizing efforts. The January 21 women’s march organizers have called for a “Day Without a Woman” to underscore women’s indispensability to the economy, and a newer, more left-leaning national planning group has called for a Women’s Strike in solidarity with women globally.

While supportive of a broad-based mass mobilization, the Women’s Strike Committee seeks to sharpen the political messaging of today’s International Women’s Day strike in several ways. Their national platform is openly anti-racist and anti-imperialist. They have not shied away from the use of militant language or an explicit critique of capitalism. There will not likely be Democratic Party politicians featured at the events organized by the strike committee.

Even the use of the language “strike” sends a powerful message. Women are being called upon to “strike a blow” for gender justice; to focus on working women, not elite women; and to, as the original call insists, reject “lean-in feminism” (referring to the book title by corporate feminist Sheryl Sandberg). The strike is a call to embrace a more radical and inclusive feminism for the 99 percent, echoing the anti-elitist message of the Occupy Wall Street movement of the early 2000s.