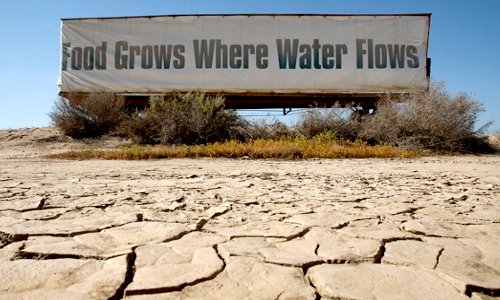 The winners and the losers of the California water crisis

A recent article published in Local Environment highlights the widening gap of inequality between the wealthy and the poor of California, specifically in relation to the State’s current drought.

The authors, Stephanie Pincetl and Terri Hogue, discuss what has caused these inequalities to expand — the outdated and unsupervised water regulations still currently used, combined with decentralized local control means using and sourcing water comes down to the simple matter of what people can and cannot afford.

California’s water systems are described as “antiquated and dysfunctional” due to the State’s reluctance to challenge “historic seniority” of water rights, while simultaneously refusing “to implement the rules of the 1902 Reclamation Act.” As a consequence, corporate farmers can water thousands of acres of land at a subsidized federal cost without being required to report their groundwater usage. The authors explain that this excessive water pumping “is leaving a number of low-income communities with no water what so ever.”

Pincetl and Hogue continue to explain that despite a lack of water availability within the State, “those at the top level feel less compelled to change their behaviours” when it comes to water conservation. When water rates increase due to scarcity, those that use less water during these times tend to be the less wealthy as “they can’t afford not to.” Meanwhile, the wealthy “can afford to water as much as they wish” with the need to conserve water appearing unnecessary to them.

The authors also discuss the issue of California’s water infrastructure and management, which continues to follow an “extremely decentralized” “late 19th Century belief in local control.” With “no specific regulations to groundwater” and over “100 different water delivering entities in Los Angeles alone” the State water companies have little restrictions, with water pumping described as “a free for all — or rather those with the most money to dig the deepest wells get the most water.” Furthermore, those areas that have the most wealth see the most water, with more affluent regions receiving “up to three times more water than less wealthy areas,” increasing the economic inequality gap in California.

Pincetl and Hogue’s conclude to clearly express the State’s need for “over a century of water law” to be unravelled under a “leadership that will be backed by legislation and profound regulatory change.” The authors convey throughout their article that the water inequality stemmed from California’s long-established and entrenched State laws and regulations. However, they lean towards a silver lining that could come from California’s current water shortage, ending with the suggestion that a “crisis is always an opportunity for dramatic change.”

The above story is based on materials provided by Taylor & Francis. Note: Materials may be edited for content and length.