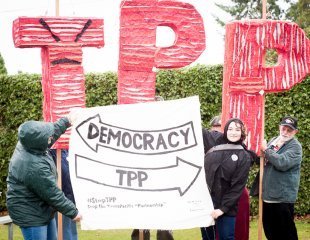 Will the trans-Pacific trade pact deepen our climate change nightmare?

When Justice Ruth Bader Ginsburg spoke recently at the Georgetown University Law Center in Washington DC, she said that if she had to pick one case to undo, her choice would be the 2010 Citizens United ruling. Two years after that decision, one poll found that 62% of Americans also opposed it. Among progressives, there is even broader consensus that it represented a sea change for democracy.

Bader remains optimistic that one day, there will be more sensible campaign finance restrictions. She quoted her late husband, Georgetown law professor Martin Ginsburg, who said, “The true symbol of the United States is not the eagle, it’s the pendulum. When it swings too far in one direction, it will swing back.”

But while that has been true throughout American history, it can only continue to happen if the pendulum doesn’t get into the wrong hands. That’s why maintaining democracy in the post-Citizens United era demands a higher order of vigilance.

That brings us to the new breed of global trade deals, the first of which is slated to come up in the Senate some time this month. Until recently, these deals have eluded public notice, shrouded in secrecy, dense with complex provisions and branded with obscure initials like TPP and TTIP. But if their critics are right, these deals are slated to function as the next logical step in a deconstruction of democracy on the same continuum as Citizen United.

Most people assume that both Congressional and public oversight will occur prior to signing. Not true. Bypassing that evaluation via “Fast Track,” a straight up or down vote, without any debate, review, or changes, is core to the strategy for passing the Trans-Pacific Partnership (TPP) and the Transatlantic Trade and Investment Partnership (TTIP). That is why Sen. Bernie Sanders (I-VT) is asking the President to “make the full text of all pending trade agreements public.

The deals have been secretly negotiated by multinational corporations in treaty language that runs to thousands of pages. They have been leaked in bits and pieces. This makes it easy for mainstream media pundits like Paul Krugman to miss crucial issues. They typically zero in on a specific aspect (such as trademark law or generic medicines) while missing the key provisions that alarm environmentalists— ones that contravene grassroots initiatives on climate change, food quality, fracking, and toxic chemical regulation. …more