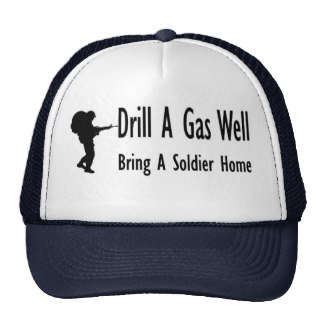 Will fracking bring the soldiers home?

Advocates of high volume, slick water horizontal hydraulic fracturing, popularly known as fracking, often champion the catchphrase: “Drill a well, bring a soldier home!” This can be found on placards held by pro-frackers at demonstrations and on billboards across the United States. You can buy T-shirts and bumper stickers on eBay that picture a gun-toting soldier with the same slogan. After all, natural gas is supposedly “Clean, Abundant, American!” But fracking will not accomplish what they expect. Only a genuine peace would do that. Furthermore, the image of fracking as green, inevitable, and necessary is fictitious. Fracking is itself a form of ecological warfare. It is the epitome of violence against nature, which includes all of us….more