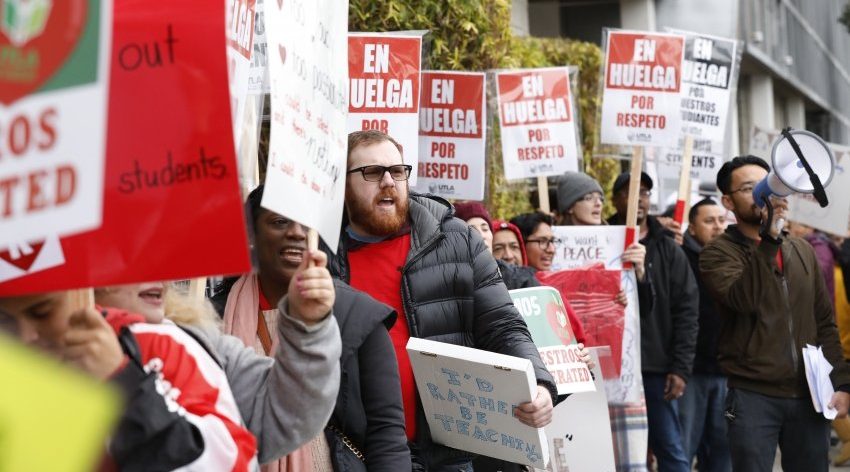 Why Unions Must Bargain Over Climate Change

In recent years, some unions have embraced “bargaining for the common good,” which use the union campaign to win broad, righteous public benefits. The best current example of this is the Los Angeles teachers’ strike, which opposed the underfunding, privatization and overcrowding of schools—all of which hurt students. Common good goals often bump against the constraints of what is legally bargainable. For instance, does a demand from teachers’ unions that school districts use district-owned property to fund and build affordable housing for teachers affect working conditions? While shortages of affordable housing affect teachers very directly, how school districts use their land and invest their money is normally considered a managerial prerogative.

But last fall’s report from the Intergovernmental Panel on Climate Change is a game-changer. It concludes that humanity has 12 years to cut greenhouse gas emissions enough to hold global warming to 1.5 degrees Celsius—and avoid civilization-threatening consequences of climate change. There is a lot of space between projected best- and worst-case future scenarios. It’s the difference between bad and apocalyptic. That space represents hundreds of millions of people dying. Avoiding worst-case scenarios, in strictly scientific terms, requires everyone to do everything, immediately.

The looming timeline of the IPCC report means unions must have a right to bargain over climate change, especially in the public sector. What good is it to negotiate the assignment of overtime when the sky is on fire? Does a public employer really want to claim that its direct complicity in the potential collapse of civilization has no bearing on working conditions? Can government claim that abandoning its workforce to die or flee their homes doesn’t affect working conditions? If employers don’t accept that every choice made today affects the near future, they’re denying science. Local and state governments in Democratic strongholds may find it politically challenging to posture about resisting Republicanism nationally while denying the local implications of that stance.

Thanks to the Sunrise Movement and Rep. Alexandria Ocasio-Cortez (D-N.Y.), the Green New Deal provides a framework for us to declare our part in everyone doing everything immediately. The Green New Deal calls for a government-funded jobs program to carry out a just transition to a carbon-free economy at the rates called for by the IPCC report. This is a perfect common good framework for unions to respond to the most urgent challenge of our time, while simultaneously promoting a high-functioning public sector as antidote to neoliberalism’s degradation of public services.

Service Employees International Union (SEIU) Local 1021, the union where I work, supported the campaign to divest the San Francisco pension plan from fossil fuels and to stop a new coal shipping terminal at the Port of Oakland. In my union, we advance our goals on parallel tracks via collective bargaining and public policy, using each to reinforce the other. The nexus between the functions of local government, climate change and jobs goes even further. San Francisco has already made significant commitments on many of these initiatives, and plans to do more. A local government Green New Deal collective bargaining platform would include climate mitigation strategies to reduce emissions:

It would also include climate adaptation strategies to prepare vulnerable communities to survive coming floods, fires, droughts and diseases:

Perhaps the best climate policy is transit-oriented, high-density affordable housing. It reduces commute times, and helps public workers and the people who depend on their services. In San Francisco, public services suffer from housing costs as workers move away and commute further distances. Housing drives teacher turnover, makes buses late because the Municipal Transportation Authority can’t hire drivers, and compromises emergency response when many first responders live far away.

For unions dealing with State governments, a Green New Deal platform might also include:

One obstacle to bargaining the Green New Deal is buy-in from members. Union members, like a lot of us, worry about climate change but are demoralized that it is too vast for them to do anything about. They’ve taken it on the chin from neoliberalism for a long time, so have urgent goals about fighting to protect public services from privatization and their jobs from being dragged yet further down in a race to the bottom. Tackling the Green New Deal can understandably feel like one more burden added to an already stuffed agenda.

Unions have long been waging defensive fights to maintain basic workplace protections in an era of austerity, but we’re changing. Where common good strategies succeed, most recently showcased with the Los Angeles teacher strikes, the membership’s readiness to strike for the community resulted from lengthy deep internal education, organizing and coalition-building. Union leadership would need to see the Green New Deal as a tool against austerity politics. We’d need to educate members about their collective power to make a difference on the most fundamental crises of our time—and raise expectations of what an expanded public sector could do.

The Green New Deal is basically the reverse of Naomi Klein’s concept of the “shock doctrine,” which refers to the process whereby capitalists take advantage of crises to reorder policies in their interests. Civilization is menaced by the Two Horsemen of the Apocalypse: climate change and inequality. Inequality is so bad that the richest 400 Americans own more wealth than the poorest 60 percent. The percentage of young people who will earn more than their parents is plunging. Public workers and their unions belong at the center of the solution to both. The policies of a Green New Deal require a robust and well-funded public sector with good union jobs. Because of the nature of public sector work, an expanded public sector as part of a Green New Deal disproportionately benefits women and people of color.

On Friday, the AFL-CIO issued a letter criticizing the Green New Deal, apparently on behalf of building trades unions who work in the fossil fuel business. Those unions are inexplicably concerned that the Green New Deal’s expressed goals of meeting the challenge of climate change with a job guarantee to protect affected workers doesn’t include them. Contrary to labor skeptics who think the labor movement is hopeless, labor critics of the Green New Deal are optimists, believing that there are in fact jobs on a dead planet.

Any seasoned union campaigner worth her salt loves a contract fight because it has a hard deadline that focuses everyone’s attention—expiration and a strike threat. We already know that the ruling class’ answer to climate change is doomsday bunkers for billionaires, while the vast majority become climate refugees. For the rest of us, every labor victory in recent years has involved worker militancy and broad demands that link workers with their communities. Similarly, throughout history, every significant social movement has found an expression in labor struggles. The climate crisis will be no different. Climate science gives us a new deadline and an opportunity to show that we’re up to the task. We have 12 years.