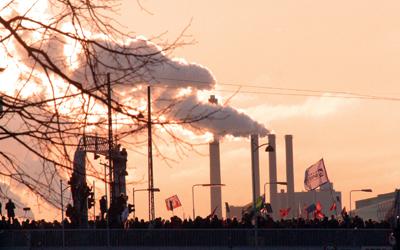 World leaders from government, business and civil society will gather in New York on September 23 for a United Nations climate summit. After two decades of failed talks, it will be the latest attempt to make progress on a global treaty to reduce greenhouse gas emissions. This time, legions of protesters will be on hand to press for meaningful solutions to the climate crisis to be implemented.

Resolving the climate crisis requires the world’s leading industrial nations to collectively agree to legally binding cuts in their emissions and to forego the short-term benefits to their economies of continuing to burn more fossil fuels. To look back on the history of the failed U.N. climate talks is to understand how maddeningly elusive this goal is and to come face to face with a global economic order that is incapable of making the kind of deep systemic changes needed to adequately address the climate crisis.

The origins of the U.N. climate talks date back to the 1992 Earth Summit in Rio de Janiero, Brazil. At that gathering, 154 nations, including the United States, signed the United Nations Framework Convention on Climate Change (UNFCC) treaty. The agreement’s stated goal was to stabilize greenhouse gas concentrations in the atmosphere at a level that would prevent “dangerous anthropogenic interference” with the climate system. However, the signatories to the treaty rejected mandatory cuts in their greenhouse gas emissions. Instead, they decided to hold a future round of climate talks.

The negotiations resumed in 1995 in Berlin. When the first Conference of Parties (COP 1) was convened that year, participants agreed that binding emissions cuts needed to be implemented and wealthy industrial nations should take the lead, as they were responsible for the largest share of past and present greenhouse gas emissions. Two years later agreement was reached on the Kyoto Protocol, which required 42 developed nations to lower their emissions by an average of 5 percent from 1990 levels. This was done with an eye toward forging new agreements that would mandate much deeper emissions cuts in the future.

The Kyoto Protocol was signed with great fanfare, though the goals it set were completely inadequate. To make matters worse, the U.S. Senate refused to approve the treaty and no U.S. president (including Democrats Bill Clinton and Barack Obama) has been willing to risk any political capital to push for its approval.

Kyoto expired at the end of 2012. No successor agreement has been reached that would move the world toward the 80 percent reduction in greenhouse gas emissions that many scientists believe is necessary to avoid destabilizing the planetary climate system. Instead, atmospheric levels of carbon dioxide, the most common greenhouse gas, have increased every year and recently surpassed thresholds not seen since three million years ago.

COP 21 will be held in Paris in 2015 and is meant to finalize a global deal to replace Kyoto with real and significant pledges on carbon reductions. However, according to participants in the process, COP 21 is already dead in the water. There will be no specific limits on emissions or targets for doing so; nothing will be legally enforceable; and whatever happens will be merely voluntary, as the United States — the world’s largest economy — has long insisted.

The deterioration of the physical world has gone hand in hand with the political degeneration of international climate talks, as neoliberal ideology, which sanctifies all things privatized and market-driven, has tightened its grip on the minds of elites.

As the science has become more definitive and the impacts of climate change increasingly obvious through the increased number of unusual and extreme weather events, the question is, why has there been so little action to address an issue that puts the whole of human society at risk?

An important part of the answer certainly lies with the economic and political power wielded by energy corporations that have a direct stake in selling more fossil fuels. As we now know from a 2014 Intergovernmental Panel on Climate Change report, 80 percent of known fossil fuel reserves fuels must stay in the ground in order to have any chance of remaining under the critical threshold of 2 degrees Celsius of average warming. That is equivalent to writing off $20 trillion in assets from the largest corporations on the planet.

The earth has warmed by 0.8 Celsius (1.4 F) since the beginning of the Industrial Revolution. Climate scientists expect the world to continue warming in the 21st century. The question is, how much?

Based on evidence from past global warming episodes, scientists worry that if global temperature increases pass the 2 degrees Celsius (3.6 F) mark, it could set in motion a cascading series of environmental calamities — melting ice sheets that reflect less sunlight back out into space, forest fires that spew more carbon into the atmosphere and thawing Arctic permafrost that would release vast stores of carbon and methane. The cumulative impact could be to send temperatures soaring by as much as 4 degrees Celsius (7.2 F) or more by the end of this century. This would destabilize the planet’s weather systems and wreak havoc on human societies.

To avoid this fate, the nations that pollute the most will have to begin seriously cutting their greenhouse gas emissions and transition away from fossil fuels to renewable energy sources over the next two to three decades. It won’t be easy, but it sure beats the alternative.

The idea that those reserves, which are the basis for the stock market valuation of oil companies, could become “stranded” led ExxonMobil to declare in a report to shareholders, “the scenario where governments restrict hydrocarbon production in a way to reduce [greenhouse gas] emissions 80 percent during the outlook period [to 2040] is highly unlikely.” Instead, a top company executive explained, “all of ExxonMobil’s current hydrocarbon reserves will be needed, along with substantial future industry investments, to address global energy needs.”

The profit-maximizing imperative of corporate titans like ExxonMobil, Chevron, British Petroleum and Shell is only part of the story. Economic competition between corporations is replicated on the international stage by economic and political rivalry among nation states. In a world run along capitalist lines, every country is engaged in geopolitical maneuvering for economic and political advantage. As the ecological situation has become both more dire and more clearly tied to the countries that have the most geopolitical power and the biggest stake in fossil fuel production and consumption, so those powers have become ever more unwilling and unable to take serious action. The problem is compounded by intensifying competition for resources and international markets as new competitor states, such as China and India, emerge on  the world stage.

As evidence, one only needs to look at the recently concluded U.S.-Africa Summit, which revolved almost exclusively around how the U.S. government needed to do more to support U.S. corporations entering and exploiting African countries for natural resources, energy production, labor and consumer markets. “We kind of gave Africa to the Europeans first and to the Chinese later, but today it’s wide open for us,” commented General Electric CEO Jeffrey Immelt.

This kind of thinking makes perfect sense for corporations as they pursue their own interests, but it’s suicidal for the rest of us. The protests we will see here in New York this month give us a chance to publicly call out the climate crisis and its root causes and to begin to envision and build a very different world. As we do so, it’s crucial to build a movement that understands that capitalism — with its relentless emphasis on growth and private profit over all other human and environmental concerns — cannot solve the problem it has created.

Chris Williams is the author of Ecology and Socialism: Solutions to Capitalist Ecological Crisis (Haymarket Books, 2010).