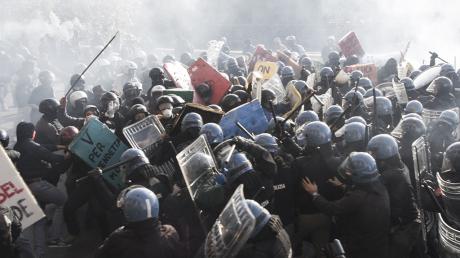 Why revolution is no longer possible

(Contrary view, but worth the read – see critique of Jeremy Rifkin: Digital ridesharing centers, which turn all of us into taxi drivers, advertise with appeals to community, too. But it is mistaken to claim — as Jeremy Rifkin does in his newest book, The Zero Marginal Cost Society — that the sharing economy has sounded the end of capitalism and inaugurated a communally-oriented society in which sharing is valued more highly than owning. The opposite is the case: the sharing economy ultimately leads to the total commercialization of life.)

A year ago, I responded to Antonio Negri’s presentation at the Berliner Schaubühne, where two critiques of capitalism collided. Negri had enthused about global resistance to “Empire,” the neoliberal system of domination. He presented himself as a Communist revolutionary and referred to me as a skeptical academic.

Zealously, he invoked the “Multitude” — the networked mass of protest and revolution that he clearly trusted to bring the Empire to a fall. The standpoint of the Communist revolutionary struck me as overly naïve and removed from reality.

Accordingly, I tried to say why revolution is no longer possible today.

Why is the neoliberal system of domination so stable? Why is there so little resistance to it? Why does the resistance that does occur so quickly come to naught? Why, despite the ever-expanding divide between rich and poor, is revolution no longer possible? To explain this state of affairs, we need a precise understanding of how power and domination function today.

Anyone wishing to install a new system of rule must eliminate resistance. The same holds for the neoliberal order. Implementing a new system of dominion requires an instance of power that posits; often, this entails the use of force. However, power that posits a system is not identical to power that stabilizes a system internally. As is well known, Margaret Thatcher, the standard bearer of neoliberalism, treated unions as “internal enemies” and combated them violently. For all that, using force to establish the neoliberal agenda does not amount to system-preserving power.

System-preserving power is not repressive, but seductive

In disciplinary and industrial society, system-preserving power was repressive. Factory workers were brutally exploited by factory owners. Such violent exploitation of others’ labor entailed acts of protest and resistance. There, it was possible for a revolution to topple the standing relations of production.  In that system of repression, both the oppressors and the oppressed were visible. There was a concrete opponent — a visible enemy —and one could offer resistance.

The neoliberal system of domination has a wholly different structure. Now, system-preserving power no longer works through repression, but through seduction — that is, it leads us astray. It is no longer visible, as was the case under the regime of discipline. Now, there is no longer a concrete opponent, no enemy suppressing freedom that one might resist.

Neoliberalism turns the oppressed worker into a free contractor, an entrepreneur of the self. Today, everyone is a self-exploiting worker in their own enterprise. Every individual is master and slave in one. This also means that class struggle has become an internal struggle with oneself. Today, anyone who fails to succeed blames themselves and feels ashamed. People see themselves, not society, as the problem.

The subjugated subject is not even aware of its subjugation

Any disciplinary power that expends effort to force human beings into a straitjacket of commandments and prohibitions proves inefficient.  It is significantly more efficient to ensure that people subordinate themselves to domination on their own. The efficacy defining the system today stems from the fact that, instead of operating through prohibition and privation, it aims to please and fulfill.  Instead of making people compliant, it endeavors to make them dependent. This logic of neoliberal efficiency also holds for surveillance. In the 1980s, to cite one example, there were vehement protests against the German national census. Even schoolchildren took to the streets.

From today’s perspective, the information requested therein— profession, education levels, and distance from the workplace — seem almost laughable. At the time, people believed that they were facing the state as an instance of domination wresting data from citizens against their will. That time is long past. Today, people expose themselves willingly. Precisely this sense of freedom is what makes protest impossible. In contrast to the days of the census, hardly anyone protests against surveillance. Free self-disclosure and self-exposure follow the same logic of efficiency as free self-exploitation. What is there to protest against? Oneself? Conceptual artist Jenny Holzer has formulated the paradox of the present situation: “Protect me from what I want.”

It is important to distinguish between power that posits and power that preserves. Today, power that maintains the system assumes a “smart” and friendly guise. In so doing, it makes itself invisible and unassailable. The subjugated subject does not even recognize that it has been subjugated. The subject thinks she is free. This mode of domination neutralizes resistance quite effectively. Domination that represses and attacks freedom is not stable. The neoliberal regime proves stable by immunizing itself against all resistance, because it makes use of freedom instead of repressing it. Suppressing freedom quickly provokes resistance; exploiting freedom does not.

After the Asian financial crisis, South Korea stood paralyzed and shocked. The IMF intervened and extended credit. In return, the government had to assert its neoliberal agenda by force. This was repressive, positing power — the kind that often proves violent and differs from system-preserving power, which manages to pass itself off as freedom.

According to Naomi Klein, the state of social shock following catastrophes such as the financial crisis in South Korea — or the current crisis in Greece — offers the chance to radically reprogram society by force. Today, there is hardly any resistance in South Korea. Quite the opposite: a vast consensus prevails — as well as depression and burnout. South Korea now has the world’s highest suicide rate. People enact violence on themselves instead of seeking to change society. Aggression directed outward, which would entail revolution, has yielded to aggression directed inward, against oneself.

Today, no collaborative, networked multitude exists that might rise up in a global mass of protest and revolution. Instead, the prevailing mode of production is based on lonesome and isolated self-entrepreneurs, who are also estranged from themselves.  Companies used to compete with each other. Within each enterprise, however, solidarity could occur. Today, everyone is competing against everyone else — and within the same enterprise, too. Even though such competition heightens productivity by leaps and bounds, it destroys solidarity and communal spirit. No revolutionary mass can arise from exhausted, depressive, and isolated individuals.

Neoliberalism cannot be explained in Marxist terms. The famous “alienation” of labor does not even occur. Today, we dive eagerly into work — until we burn out. The first stage of burnout syndrome, after all, is euphoria. Burnout and revolution are mutually exclusive. Accordingly, it is mistaken to believe that the Multitude will cast off the parasitic Empire to inaugurate a communist society.

The sharing economy leads to the total commercialization of life

How do matters stand with communism today?  “Sharing” and “community” are constantly being invoked. The sharing economy is supposed to replace the economy of property and possession. Sharing is Caring runs the maxim of the “Circlers” in Dave Eggers’s recent novel: to share is to cure, so to speak. The sidewalk leading to the Circle corporate office is emblazoned with slogans such as Community First and Humans Work Here. A more honest motto would be, Caring is Killing.

Digital ridesharing centers, which turn all of us into taxi drivers, advertise with appeals to community, too. But it is mistaken to claim — as Jeremy Rifkin does in his newest book, The Zero Marginal Cost Society — that the sharing economy has sounded the end of capitalism and inaugurated a communally-oriented society in which sharing is valued more highly than owning. The opposite is the case: the sharing economy ultimately leads to the total commercialization of life.

The change that Rifkin celebrates — from owning to “access” — has not freed us from capitalism. People without money still have no access to sharing. Even in the age of access, we still live within what Didier Bigo has dubbed the “Ban-opticon,” and those without means remain excluded. “Airbnb” — the computerized marketplace that turns every home into a hotel — has even made hospitality a commodity.

The ideology of “community” or a “collaborative commons” leads to the total capitalization of existence. It makes it impossible to be friendly without a purpose. In a society of continuous, mutual feedback, friendship, too, becomes commercialized. People are friendly to get better ratings.

This piece was originally published in the Süddeutsche Zeitung, 2 September 2014.