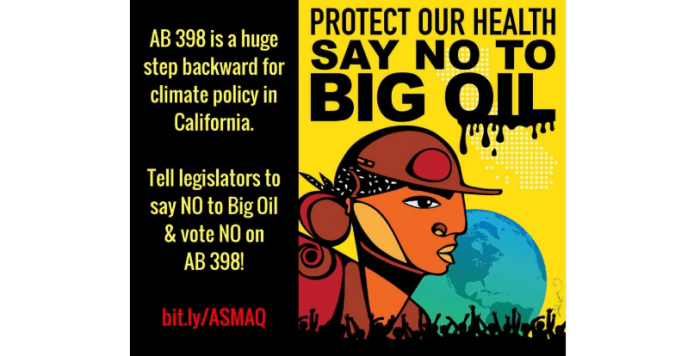 Why are environmental NGOs siding with the oil industry in support of cap-and-trade in California?

California’s Global Warming Solutions Act of 2006 (AB 32) expires in 2020. What will replace it is the subject of intense debate in California. In recent weeks Governor Jerry Brown brought the oil industry to the negotiating table. And earlier this week, Brown and supporting legislators introduced their proposals, based on the oil industry’s wish list: AB 398 and AB 617.

A vote on the proposed cap-and-trade package is scheduled for Monday, 17 July 2017. To avoid future legal challenges to his proposals, Brown needs a two-thirds majority.

A coalition of more than 50 environment justice and climate groups in California has come out in opposition to the proposed bills. RL Miller, president of Climate Hawks Vote, explains why she opposes the proposed extension to cap-and-trade:

“AB 398 began as a Big Oil wish list, and it hasn’t improved since then. The climate crisis demands a moral response, not another round of compromised politics. While we appreciate the governor’s desire to extend cap and trade, we suggest that he’s better off talking to the authors of SB 775 and/or tearing up this draft and starting again next year, with a bill that will put Californians’ health first.”

I’m not here about some cockamamie legacy, that people talk about, this isn’t for me. I’m going to be dead, it’s for you and it’s damn real. So I just ask you take it seriously.

Brown is right. There is a climate crisis. But Brown is backing the oil industry’s solution. The focus of Brown’s speech was not on reducing emissions from burning fossil fuels in California. Brown’s aim was to promote cap-and-trade:

Cap and trade is the efficient program, and that’s why the people who know most support it. That’s the big picture here. We are reducing the permissible level of CO2 and greenhouse gases that can be emitted. And that cap is going down. The permissible level is getting smaller every year, by millions of tons.

The key problem with AB 398 is that it is a proposal based on the oil industry’s wish list. It does far too little to reduce greenhouse gas emissions in California. Cap-and-trade allows polluters to pay their way out of reducing greenhouse gas emissions. The oil industry is, of course, happy to pay its way out of continued pollution, rather than reducing its pollution.

As Amy Vanderwarker, Co-Director of the California Environmental Justice Alliance points out,

“It does not get us to the real, rapid emissions reductions that our planet and our communities desperately need.”

Vanderwarker is also concerned about the “market design provisions” which make achieving emissions reductions more difficult. Vanderwarker highlights “the excess of free allowances, abundance of offsets, and carry over of unsold allowances into the post 2020 market”.

This new bill would make cap-and-trade the only way that the state’s Air Resources Board can address climate pollution from oil and gas refineries and production facilities. The bill would give Big Oil and other polluters within the cap-and-trade system a free pass from other crucial rules that protect our health and climate.

Why are environmental NGOs on the same side as the oil industry?

Given this opposition, given the involvement of the oil industry, and given the clear problems with the proposed extension to cap-and-trade, we might expect environmental organisations to oppose the proposals.

But no, the following so-called environmental organisations put out a press release in support of AB 398 and AB 617:

Part of the problem is that with Donald Trump as US President, it’s easy for Jerry Brown to step into the self-appointed role of “climate leader”. Brown recently flew to China to talk about climate change, and during the G20 meeting in Germany he announced a “Global Climate Action Summit”, to be held in California in September 2018. Brown can paint any action he takes on climate change as a contrast to Trump’s idiotic position on climate change.

Action is needed on climate change, but carbon trading is not action. In the past five years, Chevron’s greenhouse gas emissions haven’t changed much. Air quality around Chevron’s massive oil refinery in Richmond hasn’t improved either.

Carbon trading is a way of avoiding the only way we can address climate change – by keeping fossil fuels underground.

Adam Scow, California director of Food and Water Watch, explains in an interview with Lauren Steiner yesterday, the importance of “getting off of fossil fuels”. He says Food and Water Watch is disappointed with the cap-and-trade proposal, and adds that, “It’s not that complicated to get to renewable energy, it’s a political problem.”

“As for what’s going on with this cap-and-trade fight, the big difference of opinion is whether we’re going to accept these oil and gas companies running our energy system in perpetuity, and that we have to follow their orders, just accommodate them. Or whether we’re going to have a real political revolution where we reclaim our democracy away from these companies and have the real climate policies that we need to have a liveable future. That’s what’s going on here.”

Full disclosure: This post is part of a series of posts and interviews about California’s cap-and-trade scheme, with funding from Friends of the Earth US. Click here for all of REDD-Monitor’s funding sources.