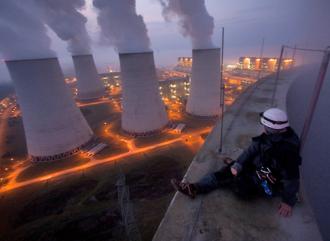 Whose consumption is killing the planet?

THE CONSEQUENCES of human-induced climate change are dire. Crop failures will increase. Severe weather and rising sea levels will wreak more havoc. Species are being wiped out by the hour–and the continued existence of our own is threatened.

Even without the threat of climate change, we live in a world of vast inequality, where the majority of the world’s population struggles to meet basic needs like putting food on the table–while corporations refuse to pay living wages, and decent health care and housing remain unaffordable for many, when there is access at all.

As of 2010, 2.4 billion people in the world were living on less than $2 a day–more than one-third of the world’s population. Close to 1 billion people live on less than a $1 a day on average. Nearly 870 million people suffer from hunger and malnutrition, according to UN standards–around one in every eight people on the planet.

The growing numbers and size of urban slums throughout the world have typified this poverty in the modern era. One-third of the global urban population lives in what are classified as slums–6 percent of the urban population in developed countries and a staggering 80 percent in developing countries. Most slum dwellers live without clean water or other infrastructure.

Yet some people would have us think that the growing ranks of the poor are the real source of environmental stress and food shortages, rather than demand from those who rule in the Global North.

This is simply not true. According to environmental writer Fred Pearce, the poorest 3 billion people are responsible for only 7 percent of global emissions of greenhouse gases, while the richest 7 percent produce half of all emissions.

Clearly, the world’s poor are not driving climate change. Food shortages have more to do with the price of food, not its availability.

MANY IN the environmental justice movement are rejecting the racist arguments about “overpopulation.” But mainstream environmental organizations still typically accept the idea that “buying” is at least a major source of the ecological crisis. The belief is that consumer choices and individual lifestyles, especially in the wealthiest countries, drive the unsustainable devouring of resources around the globe.

The persistent stereotype is that average Americans, especially working class whites, just love gas-guzzling pickups, junk food, plastic, God, the Republicans and shopping at Walmart. Of course, people like this do exist, but they are not as universal as the stereotype suggests–and moreover, they are more of a symptom of the world we live in than a cause of it.

The plain truth is that most of us, even though we live in the country most responsible for greenhouse gas emissions and environmental destruction, are powerless to shape the economic system–and have had no say in the creation and maintenance of a fossil fuel-based energy infrastructure.

The trite conclusion is that we should all just consume less and recycle more. But all this directs our attention away from primary driver of environmental destruction–namely capitalism, a political, economic and social system run undemocratically by elites at the expense of the planet and ordinary people.

THIS SOLUTION of reducing personal consumption also doesn’t take into account the one in six people living in poverty in the U.S.–and that statistic is according to official standards, which understate the actual numbers of the poor. These “North Americans” don’t consume enough food on a daily basis, not to mention their lack of access to housing and health care.

Roughly, 70 percent of U.S. consumption takes place among the top 20 percent of income earners. The wealthiest 5 percent of Americans own more than the rest of the population combined.

Beyond the gap between rich and poor, the environmental destruction caused by corporate consumption and production dwarf those of individuals. Roughly two-thirds of greenhouse gas emissions since the beginning of the industrial age have come from just 90 major companies, according to researchers writing in the journal Climatic Change.

This lopsided reality applies to other forms of pollution. According to Heather Rogers, author of Gone Tomorrow: The Hidden Life of Garbage, for every pound of household waste, there are another 70 pounds of waste created by industries like mining, manufacturing, agriculture and petrochemicals.

The corporate elite decide how and where electricity is produced, not consumers. And even though a recent study shows broad support for more public transportation, particularly among the young and lower-income people, our car culture is ruthlessly defended and promoted by the auto and oil industries, even now.

Despite these facts, the “all Americans are to blame” approach was used to explain the second Iraq war. Supposedly, our addiction to oil, suburban homes and SUVs caused the U.S. invasion–George W. Bush sent in U.S. troops so American consumers could have more oil. The consumerist logic was that if we just rode bikes or at least used fuel-efficient cars, war would eventually stop.

But the end goal for U.S. imperialism in Iraq was to use oil as an economic and political wedge against its main competitors on an international scale, including Japan, India and China. At the time of Iraq war, the U.S. got about 13 percent of its oil from the Middle East. Since then, the U.S. energy boom has led the Obama administration toward rebuilding the U.S. economy on the basis of cheap fracked natural gas and shale oil–and clearly, the U.S. is no less prone to going to war.

U.S. corporations and their political partners in Washington don’t try to control Middle East oil because they are following orders from U.S. consumers. They want control over world energy supplies to leverage American corporate interests in a global economy prone to crisis.

MANY ANTI-capitalists would agree with all of this, but there is still debate about whether a reduced standard of living is necessary in the advanced world to get the kind of drastic emissions cuts necessary to head off environmental collapse.

The organization Deep Green Resistance (DGR), for example, holds that “civilization, particularly industrial civilization, is fundamentally unsustainable and must be actively (and very urgently) dismantled in order to secure a livable future for all species on the planet,” according to one summary.

While many people reject the controversial politics and tactics of DGR, their position on deindustrialization is often understood as the only remaining solution for serious environmentalists. We must all return to a more natural existence, which likely would mean growing our own food.

We do need a different type of society that is not based on chaotic and unplanned growth, in which we would need far less energy. But does that mean a return to a more primitive way of life–or a planned, rational and sustainable system that raises the quality of life for the majority of people in society.

For many of the world’s poor, including those living in the U.S., wherever they live, there is daily struggle to get access to food, electricity, water, education–that is, the most basic elements of a human existence. The idea that these people, who already live with far too little, need to “go back to the land” and “live with less” seems like an insensitive joke.

The romantic view about de-industrialization glosses over the entrenched systemic problems of poverty, racism and inequality, and therefore throws out an important part of the solution–the type of sustainable, smart and coordinated development that is needed to raise the quality of life for everyone on the planet.

The de-industrial argument is based on the same “per-capita logic” that blames all Americans for environmental problems. While this more radical version targets capitalism as the cause of the crisis, it also dismisses the idea that working people could organize together to reconstitute and reshape our society collectively.

Yes, we need to radically and quickly transform current industries–but how will that take place? By industrial sabotage carried out by an elite group of eco-warriors, the only people who really “get it”? By pre-figurative experiments that overwhelm the system? Or by a revolution of the vast majority in society that wrests political and economic power from the rich, and transforms ourselves and our way of life in the process?

Any solution to climate change will require a sane, democratic and planned economy that stops making cheap shit people don’t need, that ends wars, that radically curbs waste and pollution, and that transforms all the other things keeping energy and transportation demands so high. This must begin with people organizing throughout society, especially in their workplaces, to have a say in what we produce and how we produce it.

Demands for jobs as part of the solution must align with these priorities–not by simply adding green jobs and renewable energy to the mix under capitalism. A just transition must address historic inequality and uneven development, and reject the laws of profitability by taxing the rich and nationalizing polluting industries to shut them down.

Understanding the capitalist system is key to building the climate justice movement we desperately need to achieve these goals. The lifeblood of the capitalist mode of production is constant accumulation in its search for profit. It’s a system based on ruthless competition, chaotic growth and never-ending waste.

Ordinary working people and the poor in the U.S. and around the world aren’t to blame for the crisis we face. It’s not our individual consumption that is destroying the world. Capitalism is burning our planet as it preys on the world’s resources–human and natural resources alike.

The elite of this country–from political leaders to their buddies in the corporate boardrooms–are the ones destroying our planet. We must organize collectively to stop them.