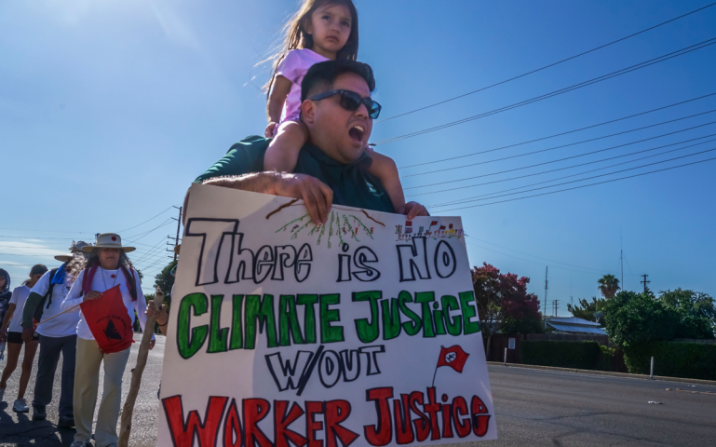 Environmental and labor organizers reflect on strategies for collaboration

In 2020, Washington State passed the Climate Commitment Act, and when it went into effect on January 1, 2022, Rosalinda Guillen was appointed to its Environmental Justice Council. The appointment recognized her role as one of Washington’s leading advocates for farmworkers and rural communities.

Guillen directs Community2Community Development, a women-led group encouraging farmworker cooperatives and defending labor rights. She has a long history as a farm labor organizer and in 2013 helped form a new independent union for farmworkers, Familias Unidas por la Justicia. Guillen agreed to serve on the council but with reservations. She feared that the law’s implementation would be dominated by some of the state’s most powerful industries: fossil fuels and agriculture.

“Its market-based approach focuses too much on offsets,” she says. “Allowing polluting corporations to pay to continue to pollute is a backward step in achieving equity for rural people living in poverty for generations.” Just as important to her, however, is that while the law provides funding for projects in pollution-impacted communities, it doesn’t look at the needs of workers displaced by the changes that will occur as the production and use of fossil fuels is reduced.

The impact of that reduction won’t affect just workers in oil refineries but farmworkers as well. “The ag industry is part of the problem, not just the fossil fuel industry,” Guillen says. “They’re tied together. Ag’s monocrop system impacts the ecological balance through the use of pesticides, the pollution of rivers and clearing forests. As farmworkers, this law has everything to do with our miserable wages, our insecure jobs, and even how long we’ll live. The average farmworker only lives to 49 years old, and displacement will make peoples’ lives even shorter.”

The key to building working-class support for reducing carbon emissions, she believes, is a commitment from political leaders and the environmental and labor movements that working-class communities will not be made to pay for the transition to a carbon-free economy with job losses and increased poverty. But the difficulties in building that alliance and gaining such a commitment were evident in the defeat of an earlier Washington State initiative, and the fact that the Climate Commitment Act lacked the protections that initiative sought to put in place.