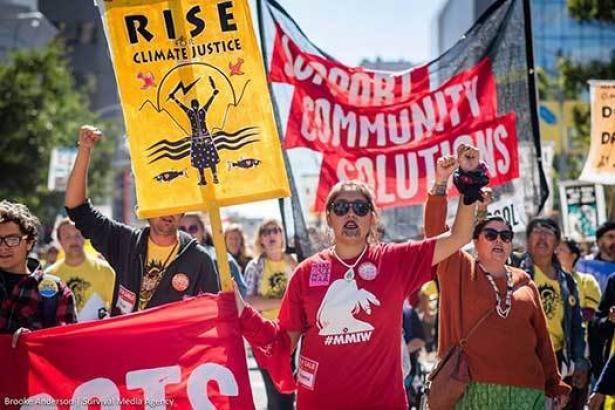 The PRO Act is emerging as the left’s answer to a classic political tension.

On March 9, the Protecting the Right to Organize Act passed the House by 225–205 votes. If it passes the Senate and becomes law, it will peel back over half a century of anti-union policies, including core provisions of the Taft-Hartley Act of 1947. It would override state-level right-to-work protections—the darlings of the Koch brothers machine—and create harsher penalties for employers who interfere with employees’ organizing efforts. But in myriad ways, the act might also do something unexpected: set the stage for sweeping climate policy.

A coalition led by the International Union of Painters and Allied Trades, or IUPAT, and the Communication Workers of America is mobilizing to push the PRO Act over the finish line in the Senate. The youth climate group Sunrise Movement was an early recruit, and the Democratic Socialists of America—including its ecosocialist working group, which is also pushing for a Green New Deal—will be deploying its members in key districts around the country to ensure it’s passed. After a kick-off call over the weekend featuring Congressman Jamaal Bowman, Association of Flight Attendants-CWA head Sara Nelson, and Naomi Klein, DSA is holding trainings for its members throughout March as well as events around the country pushing key senators to back the bill in the lead-up to May Day. Sunrise last week launched a Good Jobs for All campaign, which is urging on a federal job guarantee introduced recently by Representative Ayanna Pressley. Over the next several weeks, Sunrise hubs will be working alongside progressive legislators and holding in-district protests to advance five priorities for upcoming infrastructure legislation, including the PRO Act. After its passage through the House last night, a press release from the groups praised the measure as a “core pillar of the Green New Deal.”

The alliances forming around the PRO Act buck long-held wisdom in Washington about what it would take to get labor unions and environmentalists to work together. James Williams Jr., IUPAT’s vice president at large, has been frustrated by years of seeing the two talk past one another. Construction unions, in particular, have come to loggerheads with climate hawks over infrastructure projects like the Keystone XL and Dakota Access pipelines. “I would blame labor a lot of the time for this,” he says, “but there have to be deeper conversations about the fact that labor is going to lose jobs that have been really good jobs for a really long time.”

IUPAT is affiliated with both the AFL-CIO and the North American Building Trades Unions, or NABTU, with members doing everything from industrial paintwork to commercial glass installation to flooring. Tens of thousands of IUPAT members in traditional energy sectors, Williams said, stand to lose work. Those members now “make a really good living—all the same things that the Green New Deal wants to create. The PRO Act is a perfect bridge to that. In order to lift wages in new forms of employment, workers have to have the right to organize.”

Though environmentalists have generally been Democrats in the United States, many haven’t seen themselves as part of a tradition that includes organizing labor, with roots instead in conservation and legal fights to protect tracts of wilderness. One popular approach to navigating labor-climate tensions has been to try inoculating climate legislation against unions’ de facto veto power among Democratic politicians, as accusations of so-called job-killing environmentalism are still catnip for reporters and the right. Often that means brokering agreements among union and green group leadership to focus on the more positive, less controversial aspects of green investments while avoiding touchier subjects like fossil fuel phaseouts. The downside of that is obvious: The U.S. desperately needs those fossil fuel phaseouts to meet climate targets. And avoiding tough conversations won’t make actually existing energy transitions any easier, much less build shared trust.