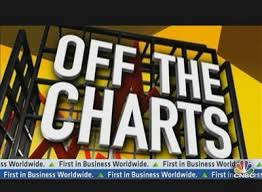 From end 2014 through Fall of 2015 global sea levels surged. Building heat hitting +1 C above 1880s averages in the atmosphere-ocean system continued to set off a range of what appear to be ramping impacts. Thermal expansion grew more dramatic as oceans continued to heat up during what may be a record El Nino year. Rates of land ice melt continued to increase — providing a greater and greater fraction of overall global sea level rise. And global ocean currents showed signs of a melt-spurred change — which resulted in an uneven distribution of this overall rise.

During that less than one year time, seas rose by fully 1 centimeter. That’s three times the ‘normal’ rate that’s been roughly ongoing since the early 1990s. A big bump that’s now part of a three-and-a-half-year, 3-centimeter surge. One more sign that global sea level rise is starting to really ramp up.

This big, one-centimeter, jump topped the previous AVISO graph, which went up to 8 centimeters, forcing the measure to generate a new graph with a 9 centimeter top like. In other words, ‘we’re gonna need a bigger graph’ (See the old, smaller, graph here). Unfortunately, with some of the world’s top scientists predicting the potential for an exponentially increasing rate of sea level rise through this Century, it appears that ‘we’re gonna need a bigger graph’ may well become the scientific rallying cry of the age.

Possibility of Exponential Increase in Rate of Sea Level Rise

This year’s seemingly-staggering, 1 centimeter and counting, jump in sea level in less than one year, if maintained over the course of a century would result in a more than 1 meter global rise. Sadly, many new studies on the rate of glacier destabilization in Antarctica and Greenland hint that such a significant jump in sea level is not only likely, but may even be significantly exceeded under business as usual or even a moderately curtailed rate of fossil fuel burning.

A new study led by former NASA GISS head Dr. James Hansen points to the possibility of as much as 3 meters of sea level rise by mid Century and 7 meters or more of sea level rise by end Century even if the global economy somewhat steps off its current high trajectory of fossil fuel burning.

(Steadily ramping sea level rise that may be the start of an exponential curve. Image source: Research Conducted by Dr. James Hansen.)

Such massive rates of sea level rise would clearly be catastrophic.

In such cases, we’d start to see these kinds of exponential increases really begin to ramp up over the next 10, 20, and 30 years. And, given the rather large bumps we’re seeing in the AVISO measure for the past 3 and a half years, it’s possible we’re at the start of one of these potential step changes.