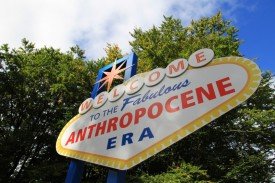 We need to talk about the Anthropocene

Working out the time-scale of the Anthropocene epoch can not be left to natural scientists, a group of researchers argued in Nature journal last month. Historians, anthropologists and others who study human society need to be brought in to the discussion, they said.

“The Anthropocene” is a now widely-used term, signifying that human activity is changing the natural environment so profoundly that it has brought a new geological era into existence.

Among scientists, it is accepted that any precise definition would best be
rubber-stamped by the International Commission on Stratigraphy, an organisation of geologists that has overseen definitions of all geological eras.

It has an Anthropocene Working Group that has since 2009 coordinated discussions of the issue among scientists. In August last year, the group reported to the 35th International Geological Congress that it collectively considered the Anthropocene to be a real phenomenon. Work on determining when it began should be formalised, the group argued.

But now geographers Erle Ellis and Mark Maslin, archaeologist Nicole Boivin and anthropological archaeologist Andrew Bauer, in a Nature article, have warned that “the formalisation of the Anthropocene should not be rushed”.

The decision-making process should be “rebuilt on a rigorous, transparent, open and sustainable foundation in which the human sciences have a major role”, they wrote.

“Decades of rigorous scientific research into the history, causes and consequences of the long-term reshaping of Earth systems by humans is being ignored in the [Anthropocene Working] group’s discussion”, they warned.

“How can a human-centred geological period be defined without characterising the development of societies, urbanisation, colonisation, trading networks, ecosystem engineering and energy transitions from biomass to fossil fuels?”

Ellis (who is himself a member of the Anthropocene Working Group) and his co-signatories are not only concerned about the way things are being done. They are also at odds with the majority of the group on a substantial issue: the preliminary conclusions about the timing of the start of the Anthropocene.

Most of the group members are focusing on the middle of the twentieth century, when the sheer volume of human impacts on the environment such as emission of greenhouse gases, erosion of biodiversity, and plastics pollution of oceans all rocketed. This sea-change has been termed the “great acceleration” by Earth Systems scientists.

But Ellis et al “question the privileging of 1950s-era markers”. They argue: “This ignores millennia of previous human influences, from our use of fire to the emergence of agriculture. Moreover, these markers misrepresent the continuous nature of human changes to our planet. They instil a Eurocentric, elite and technocratic narrative of human engagement with our environment that is out of sync with contemporary thought in the social sciences and the humanities.”

In their view, “the Anthropocene was not made in a day, nor was it created uniformly: the material records of human alterations of Earth are thick, deep and heterogeneous. They highlight huge social, cultural and technological differences across time and space.”

These issues – about how to understand the human impact on the natural environment – are obviously of great importance. So to my mind Ellis et al’s insistence that “the formalisation of the Anthropocene must be more transparent and have wider input and assessment” is welcome.

They point out that the Anthropocene Working Group is overwhelmingly made up of natural scientists. Of the 37 members, only three are social scientists studying long-term social change. They propose a different type of commission, including researchers from the fields of anthropology, archaeology, history, sociology, geography, palaeoecology, economics and philosophy.

To my mind, there is a challenge here to socialist and radical writers and thinkers, too.

Many of them have been discussing the meaning of the term “Anthropocene” in books and articles. There have been well-placed denunciations (e.g. here) of the so-called “Anthropocene narrative” – the attempt by such writers as Mark Lynas, author of The God Species, who have used the idea of the Anthropocene to reinforce a neo-Malthusian narrative that holds the whole human race responsible for damage to the natural environment, with no regard to power structures.

Last year, Ian Angus, editor of the Climate and Capitalism web site, published a book, Facing the Anthropocene, that seeks to place Earth Systems science in a Marxist framework. Angus makes the point, which I agree with, that socialists need to follow and engage with natural scientists’ conclusions. (You can see Angus’s arguments on line, too, e.g. here.)

Another book published last year, Anthropocene or Capitalocene? edited by Jason Moore,  offers theoretical considerations from several authors. In his own chapter, Moore develops his argument that dualism – e.g. a conceptual view of “humanity plus nature”, or “capitalism plus nature”, as opposed to approaches that attempt conceptual integration of humanity within nature – is a barrier to analytical progress. I think this is an important insight. (For Moore on line see e.g. here.)

It is surely axiomatic for all socialists that the impacts of human activity on nature need to be understood as products not of undifferentiated humanity, but of hierarchical, exploitative social systems – and, mostly, of capitalism, that has dominated the world economy since the industrial revolution.

But I get the sense that some socialists, in their rush to reject the ideologised, neo-Malthusian Anthropocene narrative that environmental impacts are the fault of all humans, are ignoring the need to engage with the natural scientists. (This is not an accusation aimed at anyone in particular, and I’d be pleased to be proved wrong.)

I think we should ask ourselves: is there a meaning to the “Anthropocene” concept that concerns human impacts on the natural environment, that is distinct from the neo-Malthusian Anthropocene narrative? My answer is yes. (I wrote about this here.)

Do the physical phenomena that the natural scientists study, e.g. the greenhouse effect, rising sea levels, impacts of agriculture on the biosphere, etc, matter to us who are concerned with changing human society? Yes.

In order to develop an understanding of society, in order to change it, do we need to interact with those natural scientists? (And by “we” I don’t only mean academic researchers in the humanities, but all who care about this stuff, whether or not they are in the university system.) My answer to that, too, is yes.

For that interaction to develop, the points made by Erle et al are useful. Let’s respond. GL, 16 January 2017.