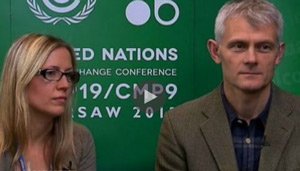 “We Have to Consume Less”: Scientists Call For Radical Economic Overhaul to Avert Climate Crisis

A pair of climate scientists are calling for what some may view as a shocking solution to the global warming crisis: a rethinking of the economic order in the United States and other industrialized nations. Kevin Anderson and Alice Bows-Larkin of the influential Tyndall Centre for Climate Change Research in England say many of the solutions proposed by world leaders to prevent “runaway global warming” will not be enough to address the scale of the crisis. They have called for “radical and immediate de-growth strategies in the United States, EU and other wealthy nations.” Anderson says that to avoid an increase in temperature of two degrees Celsius (3.6 degrees Fahrenheit), the world would require a “revolutionary change to the political and economic hegemony.”