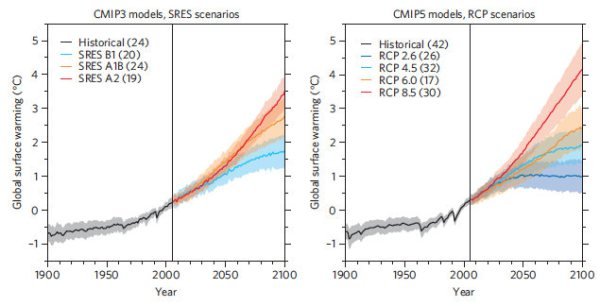 First the good news. James Hansen, one of the world’s most recognized climate scientists, along with 13 of his well-decorated fellows believe that there’s a way out of this hothouse mess we’re brewing for ourselves. It’s a point that’s often missed in media reports on their most recent paper — Ice Melt, Sea Level Rise, and Superstorms. A paper that focuses on just two of the very serious troubles we’ll be visiting on ourselves in short order if we don’t heed their advice.

The way out? Reduce global carbon emissions by 6% each year and manage the biosphere such that it draws carbon down to 350 ppm levels or below through the early 22nd Century. To Hansen and colleagues this involves a scaling carbon fee and dividend or a similarly ramping carbon tax to rapidly dis-incentivize carbon use on a global scale. Do that and we might be relatively safe. Safe, at least in the sense of not setting off a catastrophe never before seen on the face of the Earth. That’s pretty good news. Pretty good news when we consider that some of the best climate scientists in the world see an exit window to a hothouse nightmare we’re already starting to visit upon ourselves.

The bad news? According to Hansen and colleagues, even if we just continue to burn fossil fuels and dump carbon into the atmosphere at a ‘moderate’ pace some of the terrifically catastrophic impacts of human caused climate change are not too far off.

A Moderate Pace of Burning

The new Hansen paper takes a look into both our geological past and our climate future in an attempt to give us an idea what may be in store. In this scenario, model, and paleoclimate based study, Hansen and colleagues assume two things about global human civilization. The first assumption is that we don’t follow the worst case, business as usual carbon emissions policies that lead to around 1000 ppm CO2 in the atmosphere by 2100. It is instead assumed that some effort is given to reducing coal, oil, and gas consumption. That some renewable energy, increased efficiency and behavior changes replace a significant portion of future fossil fuel emissions. But the most effective solution — a complete transition away from fossil fuel burning over the next few decades — fails.