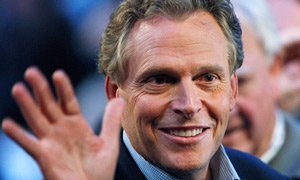 In yesterday’s Virginia governor’s race, Terry McAuliffe’s win over anti-science Republican Ken Cuccinelli is showing that being a climate-change denier is a losing political position. Certainly the election was about many issues, but climate change was the most striking difference between the two candidates. Virginia’s voters clearly rejected Cuccinelli’s attacks against climate scientists and his head-in-the-sand views. Ken Cuccinelli has a history of not only discounting scientists but spending taxpayers’ money to actively attack them. In 2010, he began a witch hunt and accused climate scientist Dr. Michael Mann of fraud. In the end, Cuccinelli’s crusade wasted hundreds of thousands of hard-earned taxpayer dollars – waste that Virginia voters did not forget.