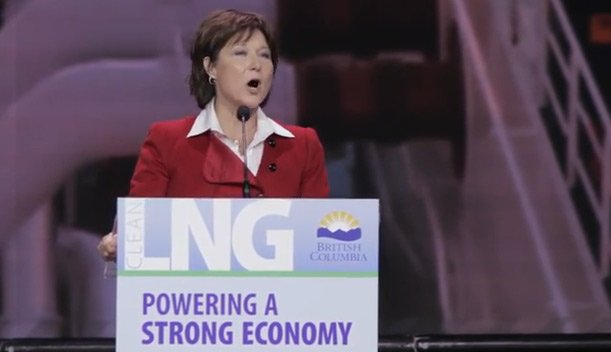 Video and article: Christy Clark: BC LNG “The Cleanest Fossil Fuel on the Planet”…Really?

In the keynote address kicking off her government’s second major conference on liquefied natural gas (LNG), BC Premier Christy Clark billed the resource as nothing short of “the cleanest fossil fuel on the planet.” Clark touted LNG as a “generational opportunity” for the province’s economy, before a sold-out crowd at the Vancouver Convention Centre yesterday. Then the Liberal leader made the following extraordinary claim: This is about our opportunity to make…the biggest contribution we ever have, as a province, to reducing greenhouse gas emissions around the globe – by powering up the economies of Asia and helping them move to the cleanest fossil fuel on the planet…move away from dirty fuels, cleaning up the air there, and cleaning up the air here.

But how does this claim stack up with the evidence on LNG – which in BC would depend almost entirely upon a massive ramp-up of controversial shale gas fracking, according to expert geoscientist David Hughes?

Cornell scientist: “Your premier has her facts wrong”

Based on similar “clean LNG” claims from the BC Liberal government in the past, earlier this month I put this question to arguably the world’s leading authority on the climate impacts of shale gas, Dr. Roberth Howarth. I spoke to him near his office at Cornell University  for the forthcoming documentary film I’m co-producing, Fractured Land. Howarth’s research on “fugitive methane emissions” – persistent escapes of gas throughout the fracking, processing and transmission stages – has revolutionized how we view the footprint of shale gas.

Dr. Howarth readily acknowledges that, when burned, natural gas emits less carbon dioxide than coal or oil. But when methane escapes into the atmosphere – as it regularly does, in much higher concentrations than we previously thought – it wreaks climate havoc.

“Methane is such a powerful greenhouse gas that when you look at the cumulative impact of these greenhouse gas emissions,” Howarth noted, “natural gas – and particularly shale gas – is the worst of the fossil fuels.”

The Cornell scientist  just released an update to his groundbreaking 2011 paper, which pegged these methane escapes at 3.6-7.9% . Anything above 2.8%, and gas is worse for the climate than coal, he explained. The BC government is still using figures like 0.3-3%, despite warnings from its own ministry officials on the climate consequences of LNG. Howarth put it bluntly:

Your premier has her facts wrong.

But he’s far from alone in recognizing these issues. A NOAA-led study of one Utah gas field last year estimated 6.2-11.7% fugitive methane emissions. The International Panel on Climate change agrees that methane is far greater heat trap than CO2. According to Howarth, over 20 year period, methane is 86 times more powerful as a greenhouse gas than carbon dioxide.

So shale gas is already a very dirty fuel – but when you go the extra, energy-intensive step of converting it to LNG, the impact is even worse, because the industry intends to burn and bleed off gas to power the cooling and shipping processes. “…LNG is probably the worst way to use [shale gas],” Howarth noted, “because it takes an enormous amount of energy to liquefy the gas to LNG – so a lot further methane emissions associated with transporting and storing the fuel.”

On that note, the Pembina Institue estimates that BC’s LNG vision of 5 plants operating in Kitimat and Prince Rupert  within the next 5-10 years would more than double the entire province’s climate footprint. And that doesn’t count all these issues with fracking itself – so the full reality is much worse. Indeed, the premier’s claims ultimately come down to a disconnect with the source of the fuel – as if LNG simply materialized in Kitimat without any upstream impacts from fracking.

And those impacts are many – extending far beyond climate.

The elephant in the room: WATER

Water is the other elephant in the room. In 2012, BC used close to 11 Billion litres of water for fracking – most of that drawn from the rivers, lakes and streams of northeast BC, a region already hard-hit by drought in recent years.

Shale gas expert David Hughes has run the numbers on what it would take to supply those LNG plants, and it means as many as 50,000 new fracked wells – close to double all the gas wells drilled in the 60-year history of the province’s gas industry. In order to supply this LNG-driven ramp-up, he and  Canadian Centre for Policy Alternatives researcher Ben Parfitt figure “a very conservatively estimated 582 billion litres of water would then be polluted and removed from the hydrological cycle.”

On an annual basis, that’s equivalent to all the water used by the city of Calgary.

Then there are the ecological impacts of myriad pipelines carrying the gas across northern BC – which recently drove highly controversial changes to BC’s Parks Act – among other issues.

And, of course, the gas plants themselves, which threaten vital wild salmon habitat in the Skeena Estuary and human respiratory health in Kitimat…

Add up all the issues and evidence, and Premier Clark’s Orwellian claim of “the cleanest fossil fuel on the planet” starts to sound a lot more like hot air than natural gas.