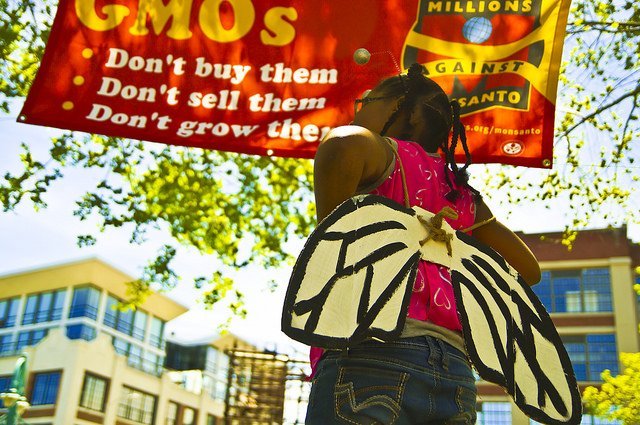 Vandana Shiva on ‘Why we march against Monsanto’

The third annual “March Against Monsanto” took place in over 400 cities worldwide Saturday. Ahead of the marches, renowned food justice activist Vandana Shiva issued the following statement of solidarity with with those participating in the global day of action against the agro-chemical giant.

I send greetings of solidarity for all the people gathered for the March against Monsanto.

Marching against Monsanto is marching for freedom and democracy, for health and safety, for seed and biodiversity.

People often ask me “Why Monsanto”?

My response is, we did not choose to target Monsanto, Monsanto chose to target our seed and food freedom, our scientific and democratic institutions, our very lives.

Monsanto has admitted it wrote the intellectual property treaty of WTO that allows seeds to be redefined as Monsanto’s intellectual property. And it is through patents that Monsanto, a poison maker, has become a seed giant, with the largest share in control over the seed market. In India it controls 95% of the cotton seed market, and the extraction of superprofits through royalties has trapped our small farmers in unpayable debt. 284,000 farmers have committed suicide in India because of debt linked to seed and chemicals.

Corporations like Monsanto were behind the EC Seed law that would have made diversity and seed saving illegal in Europe. The last parliament sent back the law to the European commission. We must ensure that the new parliament does not pass the law.

In the US, Monsanto used its money to undermine the Right of US citizens to Know what they eat. It is threatening the State of Vermont because it got a labelling law in place. And it now has introduced a bill in Congress called called The Safe and Accurate Food Labelling Act which has earned itself the name the Dark (Deny Americans the Right to Know) Act.

This is an assault on Democracy and people’s freedom.

While Monsanto announces that it is retreating from Europe, it is pushing GMOs on the Eastern European countries. And is pushing new trade treaties like TIPP, to undermine Europe’s largely GMO free status, and to get stronger IPR rights on seed.

Monsanto have claimed more than 1500 climate resilient patents, and are hoping to use the climate crisis to make even bigger profits. And recently Monsanto took over Climate Corporation, to control climate and weather data, and commodify it.

Monsanto wants superprofits through total control over nature and humanity.

We seek Seed Freedom, Food Freedom, and Earth Democracy, where all beings on the planet are free and the well being of all is protected, through sharing and caring, through love and compassion, through creating abundance for all.

That is why we March Against Monsanto.