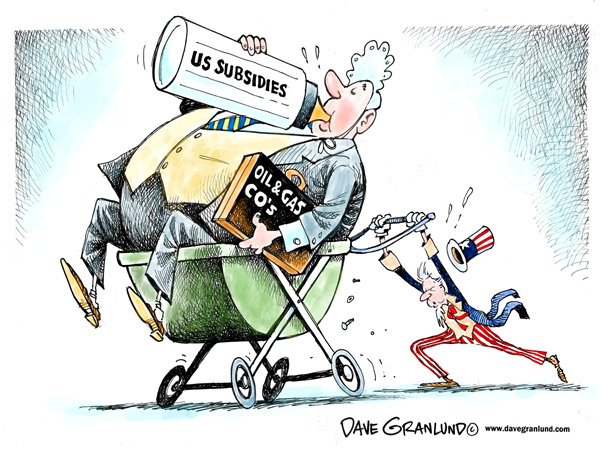 D. LASCARIS: This is Dimitri Lascaris, for The Real News Network. A new report by Oil Change International reveals that US taxpayers continue to pay out more than 20 billion in fossil fuel subsidies each year. Are these subsidies propping up an industry to protect America’s national security? Or, as critics say, are these taxpayer funded giveaways designed to serve the interests of billionaire oil barons, who bear ultimate responsibility for what is now a global climate emergency?

With us to discuss the report entitled, “Dirty Energy Dominance: Dependent on Denial” is Janet Redman, US Policy Director of Oil Change International and principal author of the report. Janet joins us today, from Washington, D.C. Thank you very much for coming back on The Real News, Janet.

JANET REDMAN: Thanks for having me again.

D. LASCARIS: So, the Oil Change International report offers a comprehensive analysis of federal and state subsidies supporting the production of fossil fuels. What do you regard as the key conclusions of your analysis?

JANET REDMAN: I think the key finding of this report is really, again as you mentioned, that we’re still, as taxpayers, propping up the fossil fuel industry to the tune of 20.5 billion dollars a year. That means each of those 20 billion dollars is moving us further away from important climate targets, like the Paris Agreement Climate Targets, and it means that we’re wasting billions of taxpayer dollars at a time when we’re thinking about deficit spending, propping up an industry that’s incredibly profitable already and incredibly polluting.

D. LASCARIS: You talk about the industry, as a whole, being profitable but isn’t it true that these subsidies are propping up parts of the industry, even to the point where if they were withdrawn, a very substantial proportion of oil and gas production and coal production would become unprofitable?

JANET REDMAN: Yeah, one of the important findings of another study that was released this week, our colleagues at the Stockholm Environment Institute have found, that actually about 50% of the oil production in the United States would not be possible, would not be profitable without these subsidies. Again, these subsidies are tax breaks, but they’re also things like access to our public lands, or incredibly cheap leases, or not paying royalties on the oil, and gas, and coal that companies pull out of our public spaces.

It also means that they have capped liability, so things like leaving a mess behind, leaving a mine behind, not paying into worker compensation funds like the Black Lung Trust Fund. So, there are lots of different ways that, in fact, we’re propping up these industries and certainly, there are different kinds of subsidies for different parts of that production chain and for different parts of the oil, gas, and coal sectors. Overwhelmingly, about 80% of these subsidies are going to the oil and gas sector at this point.

D. LASCARIS: And when did fossil fuel companies start receiving these kinds of subsidies, in the United States?

JANET REDMAN: This is really interesting, one of these subsidies, in fact, the biggest subsidy is over 100 years old at this point. So, it’s really, I think one of the most various arguments that proponents of the fossil fuel industry like to lift up is, “Hey, wait a minute. It’s only fair that we prop up oil, and gas, and coal companies because we’re propping up renewable energy industries as well.”

The reality is this is an incredibly mature energy sector. This is an incredibly mature set of technologies and so there’s really no reason to be offering the same subsidies we offered back when we were still mostly riding on a horse and cart. So, we’re seeing an incredibly mature sector, trying desperately to hold on to public handouts. What we’re saying right now is we’ve got to eliminate these. We’ve got to eliminate them because they’re a waste of money, at a time when we have a lot of other pressing public needs. In fact, the Trump administration is telling us we need to cut important public programs because they need to save money. Well, here’s 20 billion dollars we can cut right now.

JANET REDMAN: There was, of course, the announcement last week from the Department of Energy, that they’re looking at rules that would put in place new tax breaks for coal power, citing a study that they produced in the past few months, that actually found that coal power is kind of dying off on its own because of competition from both the gas sector and renewable energy. But to be perfectly honest, because coal power is incredibly expensive at this point. So, they proposed, the Trump administration has proposed, “Well, let’s give coal power tax breaks to keep it alive.”

I think what we’re going to see in the Republican and Trump administration, back to tax plan is expansion of fossil fuel subsidies in particular areas. One that’s on the table right now, that unfortunately has bipartisan support, is a tax credit for carbon capture and sequestration and enhanced oil recovery using that captured waste carbon dioxide pollution to pump out more oil. So, these are the kinds of threats we’re seeing in the moment, right now, in this tax reform process and in the budget process.

D. LASCARIS: Now, when President Trump announced his intention to take the United States out of the Paris Climate Accord, he talked about what he characterized as the massive cost of contributing to the Green Climate Fund, which, as you know is a fund designed to help other states, developing states, those that are less responsible for the climate crisis to adapt and mitigate. He characterized that as a massive cost to the United States, even though it’s a fraction of the 20 billion dollar in subsidies. What has been the justification for this level of wealth transfer from American taxpayers to one of the country’s most profitable and polluting industries? In your view, does that justification hold any water?

JANET REDMAN: Well, oftentimes, the Trump administration and, of course, proponents of the fossil fuel industry point to energy security as a first place. That doesn’t really hold water. I mean, right now, we’ve learned is that actually, the uptake of renewable energy makes our grid more secure, we’re flush with fossil fuels as it is. I think what we’re really seeing in this energy dominance approach that Donald Trump talks about all the time is wanting to export our fossil fuels, abroad. We just don’t need that to meet domestic demand and in fact, we can’t afford that in terms of the climate change implications.

Of course, the second piece that gets talked about often, is the idea that this will just increase the number of jobs that are created by expanding the fossil fuel sector. The reality, of course, is for every dollar spent in the renewable energy sector, there are more jobs created than in the fossil fuel sector. So, a better investment, a better return for our dollar is to invest in renewable energy, where we could see more job growth, and we would see healthier jobs, and we would see jobs in communities that aren’t negatively impacted by the kinds of build-out and a clean energy sector across the fence from these, from working families.

D. LASCARIS: Despite the antipathy of the Trump administration to renewable energy, it is growing leaps and bounds worldwide. It has a record year in 2016 and according to a new report from the International Energy Agency, solar energy entered a historic new era, expanding by 50% last year, making it the fastest growing source of new energy. Nonetheless, have government measures in the United States and elsewhere in the world where you see these kinds of subsidies, in your view, have they impeded the growth of the renewable energy sector? Would we be seeing even more rapid growth in this sector were it not for support for fossil fuels?

JANET REDMAN: It’s a good question, and I can’t tell the future, obviously. But the fact that we’re incentivizing and giving a leg up, to the fossil fuel industry, in the market, means that, of course, more market space is being taken up by fossil fuels. So, yes, I think if we were to, I would say, level the playing field, but I actually think that it’s okay to spend taxpayer dollars on clean energy because I think that’s a public good. I think, certainly, we would see an expansion of renewable energy uptake, if we were to take away the false competitiveness of fossil fuels by taking away the 20 billion dollars we prop them up with every single year.

D. LASCARIS: Finally, what are the recommendations made in the report in terms of dealing with Trump’s promotion of the fossil fuel sector?

JANET REDMAN: Well, of course, we’re saying that immediately, folks in Congress, and people in state houses, and state legislations should look at the subsidies that are on the books right now in their federal and state tax codes, and eliminate those subsidies. There are also proposals for new tax breaks for the fossil fuel industry, as I mentioned, around carbon capture and sequestration, around enhanced oil recovery using waste CO2. We need to stop those before they get put in place. We don’t need a new handout to the fossil fuel industry, right now.

I think more broadly, we need members of Congress, and we need lawmakers at the state level, as well, to really think about how they can resist this Trump energy expansion agenda. A lot of that will be around rulemaking. At this point, we need to see some bold moves in Congress, and whether its messaging or it’s actually pieces of legislation. We need to see a push back against giveaways of our public lands, of our public waters, access, cheap access to our energy resources that are underground and a real call for a build-out of renewable energy at this point.

D. LASCARIS: Well, this has been Dimitri Lascaris speaking to Janet Redman of Oil Change International, regarding the new report from Oil Change about the extraordinary fossil fuel subsidies that the American government continues to offer the fossil fuel sector. Thank you very much for joining us today, Janet.

JANET REDMAN: Thanks for having me. I appreciate it.

D. LASCARIS: And this is Dimitri Lascaris for The Real News Network.