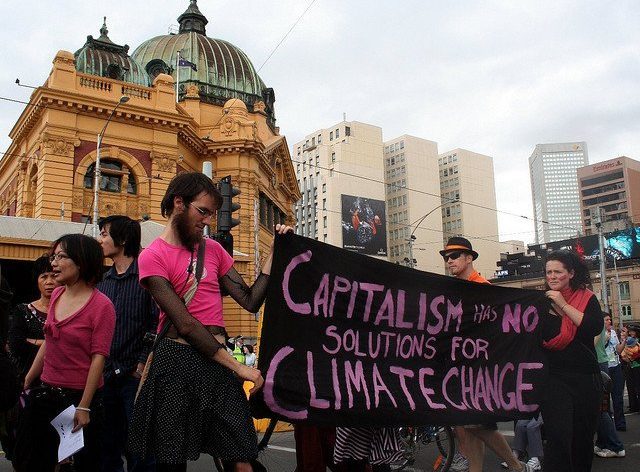 Until environmentalists tackle capitalism, we will never stop climate change

In a recent speech, environmental journalist George Monbiot argues that opposition to the central drivers of climate change (neoliberal economic policies being the key) is consistently neutralized by environmentalists themselves. He says environmentalists shape their strategies to appease people who do not share their values.

Instead of boldly asserting their own values, environmentalists adopt principles embedded in neo-classical economics. They talk like radicals or leftists, but act as conservatives, says Monbiot. “The result” he says, “is effectively no political alternatives to the neoliberal project” and perpetual losses even in the face of the catastrophic destruction and crisis caused by political opponents.

Some of the roots of this conceptual slippage — from defying to reproducing business-as-usual practices — can be identified in a number of recent debates in Vancouver between advocates of “degrowth” and “ecological economics”. These two conceptual frameworks have the appearance of radical, ecologically-minded departures from conventional economic thinking. To a certain extent they are. But they lack a crucial component, which is analysis that leads to concrete agonistic struggle against systemic power.

The premise of both degrowth and ecological economics is the need for a radical shift from growth as the basic imperative that has governed our society and economy to its opposite — contraction. The level of total economic throughput would be reduced so that it can be maintained in a perpetually steady-state. Qualitative aspects of progress and prosperity would then replace quantitative measures of growth. Sounds reasonable.

The two differ on the details of what may drive the changes — for instance, the role of green technology and market-based initiatives. For degrowth advocates, conservation will not be achieved through “dematerialization” — creating greater efficiencies in energy and resource throughput. The Jevons paradox explains that any gains in energy and resource efficiency always lead not to conservation but to greater economic growth and hence more pressure on ecological systems.

Both camps claim that ecological capitalism is conceivable though reformist measures that internalize environmental externalities of the capitalist economy. These would include numerous disincentives in tax schemes, ending perverse subsidies, reregulation, capping production, greening consumption, and the like — all directed to perfecting the market system.

This is where the tar-sand hits the road. Growth as an abstract concept that can be remedied by the “voluntary” lowering of economic throughput skirts the question of capitalism. Neither degrowth, nor the mainstream of ecological economics emphasize the necessity of breaking the concrete power relationships that guide the logic and imperatives of capital accumulation and hence, economic growth.

The social relationships that are integral to the system we call capitalism are wage labour and private ownership of the means of production (that is, property: “who owns, calls the shots”). These are technical terms to describe the reality that underneath all the talk of democracy and free markets, our society is based on class rule. The key point is this: no matter how many rationally derived, substantive voluntary gestures are recommended, the ruling classes (ie. the fossil fuel, automobile, aerospace, etc. corporations) will not voluntarily implement innovative initiatives to the extent that they threaten the expansion and waste that is central to their own existence.

Thankfully, there is an awakening to this problematic. Witness the words of top climate and social scientists:

In a Nature article entitled, “A New Paradigm for Climate Change,” climate scientists Kevin Anderson & Alice Bows-Larkin tie the need for “orthodox” scientists to “think differently” about climate change to a critique of “market economics and laissez-faire rhetoric underlying it.”

They argue that the world is on the cusp of a paradigm shift where “established knowledge is superseded in new ways of thinking and understanding,” referring to the “radical transitions” represented by Newton, Darwin, Einstein and Planck.

While not yet an anti-capitalist or socialist critique, Anderson and Bows argue that science needs be “liberated” from “failed” “economics, finance and astrology,” connect to “academic judgments” and bring “interdisciplinary insights” to conceive of alternative futures.

These realizations emerge from the noted discrepancy between the now unavoidable drift towards a two degrees Celsius rise in global warming along. This is coupled with a growing realization of the theoretical inadequacy or shortcomings of social theory, and the need to give more depth and scope to genuine and consequential action.

Similarly in the journal Ecological Economics, Blake Anderson & Michael M’Gonigle argue that despite its “potentially revolutionary departure,” their theoretical orientation led to an increasing neoclassical presence that diminished the power of its “original break with mainstream orthodoxy.”

This was a result of ecological economics’ embrace of a methodological pluralism that because it accommodated a wide diversity of economic, social and ecological reasoning, allowed it to gain reputational legitimacy or credibility within dominant political economy.

In the process, ecological economics became a forum to theorize new ways to internalize environmental costs within the neo-liberal framework of economic growth and managerial approaches (bounded within neoclassical rationality) to decouple modern infrastructures from entropic impacts of resource use.

Anderson & M’Gonigle argue that the increasing intensity and scope of global ecological crisis brings ecological economics to “a time of reckoning” vis-a-vis the dominant and hegemonical neoclassical paradigm that is now itself “in jeopardy.”

The field of ecological economics, they say, will either intensify its assimilation with mainstream economics or rigorously re-examine its “pre-analytical vision” and “current methodological commitments” in order to perform a transformational break from it. This would involve coming to terms with the critique of growth’s entropic effect, along with its incapacity to theorize its capitalist cause.

Our climate crisis is not an isolated “environmental” problem. It is a symptom of an historical socio-economic system. The growth effect is rooted in the concrete relationships embedded in the “law of value” of capitalism and can only be challenged by “system change” — transforming the system of wage labour and property that is the foundation of that system. The degrowth and ecological economics schools contain many important and worthwhile truths, but are incapable of dealing with the concrete political and social realities that would challenge the real power behind capitalist growth.

Contrast the tame academic exchange of the degrowth and ecological economics advocates, the half-hearted attempts to “perfect” capitalism,  and the middling strategies of ENGOs that follow their line of thinking — against the sacrifices made by social justice, anti-poverty, grassroots union and environmentalist activists in their fight in the streets and workplaces against corporate power. Ask yourself — where is the real struggle against social injustice and global ecocide happening?