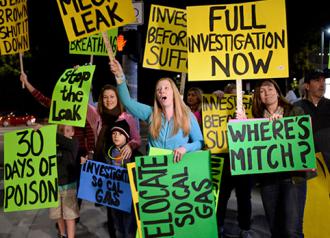 The unnatural disaster in Porter Ranch

YOU’D THINK the ecological and social crisis in California couldn’t get any worse.

The state is suffering the effects of a historic five-year drought. The water crisis forced Gov. Jerry Brown to declare a state of emergency early last year, calling for a 25 percent reduction in personal water consumption throughout the state. The drought has caused out-of-control wildfires and contributed to diminished aquifers and water reserves. The largest consumption of water by big agriculture has literally made the ground sink in the Central Valley, threatening damage to infrastructure like bridges and roads.

Pretty grim. And then, at the end of October of last year, just as the state was expected to get some relief from El Niño rains, the residents of Porter Ranch in Southern California were faced with a new crisis. The air surrounding their community and homes was filled with methane gas.

In an interview on Democracy Now!, renowned environmental and community activist Erin Brockovich, who lives close to Porter Ranch, described how with the right film lenses, the gas leak pouring into the sky looks like a volcano.

The leak hasn’t been stopped yet, almost three months after local residents detected the rupture. Gov. Brown finally declared a state of emergency on January 6. Politicians and the media are both likening the disaster to a mini-Chernobyl or BP’s 2010 Deepwater Horizon oil spill in the Gulf of Mexico.

In what is described as an affluent community of 30,000 in the San Fernando Valley region near Los Angeles, thousands of middle-class residents have been evacuated. Public schools have been relocated, and families have been placed in temporary housing. Thousands more wait to be moved. Their lives have been turned upside down by this manmade ecological disaster.

In an article by Reuters describing the school relocations, residents spoke of the health effects of the gas plume:

Eleven-year-old Cameron Michaels said he suffered daily health problems from the gas leak. “You can’t focus, you can’t concentrate, you can’t learn at all,” he said.

“I hope they’re absolutely right, but I can’t take that chance,” said School Board member Scott Schmerelson, who led the student relocation effort. “I’d rather err on the side of safety.”

THE GAS is coming from a storage facility called Aliso Canyon that is owned by Southern California Gas. The Los Angeles Times has published an interactive blog to tell the Porter Ranch residents’ stories. Their words are heartbreaking to read–along with the health effects are story after story of how people’s lives have been torn asunder. They include:

“It has caused me headaches, congestion, rashes, abdominal pain, and my dream life that I have created was taken away. Our life and dreams have been impacted so much it can’t be measured. My blood is boiling so hard that I had to have an emergency MRI on my brain.” –Chuck Tapia

“Stuffy head and headaches, mostly in the morning. We both have had breathing issues since the 2008 Sesnon Fire. My allergist told me that lots of his patients from Porter Ranch have had symptoms similar to allergies, but they have passed allergy tests. We have since discovered that there are leaks in the facility and often maintenance discharges of gas. Since my symptoms are worse now, I wonder if it has been the gas all along, and not some mysterious spore from the fire.”–Patrick Pope

According to the Environmental Defense Fund, some 82,000 metric tons of methane has escaped so far. State Sen. Ben Allen says that at its peak, “The leak emitted the equivalent amount of greenhouse gases as 7 million automobiles or six coal-fired power plants.”

The climate justice movement, armed with ever-growing scientific evidence, has created increased awareness that the extraction and burning of fossil fuels is causing climate change. Methane and carbon dioxide are the two top contributors to global warming–and this particular leak is estimated to account for one-quarter of all projected methane emissions of California for 2016.

According to Vice.com, the immediate health effects aren’t the end of the negative ecological impacts from the leak:

Methane, the main component of natural gas, is 25 times more potent than carbon dioxide when it comes to climate change impact. About one-fourth of the anthropogenic global warming we’re experiencing today is due to methane emissions, according to the Environmental Defense Fund. Leaks like the current one in California, it turns out, are a major contributor. In Pasadena, for instance, just 35 miles from the leak in Aliso, investigators found one leak for every four miles.

DESPITE THIS epic disaster, SoCalGas is projecting that it will take another month, and maybe two, to fix the leak. Utility executives told the Los Angeles City Council in December that they are working to create a “relief well.” After that, SoCalGas says it will plug the leak, and the well will be shut down afterward–which could take until March or longer.

Everyone should question SoCalGas’ competence and ability to do what’s best for the residents of Porter Ranch and the entire state of California, not to mention the world.

In an interview for Democracy Now!, David Balen described how the gas company came out on October 23 only after residents called them. Energy corporation representatives left and said nothing was wrong–even through the residents in the community smelled the gas leak for days, leading some to buy their own gas detection kits!

Some residents, including Amy Masliah, have described how their health was impacted even before October, meaning the gas was likely leaking before the end the of last year: “I have been living in Chatsworth for 11 years now. Never had any problems until the last six or seven months. I do believe that the leak has been going on a lot longer then October 2015. We have been smelling gas for a very long time…On a windy day, my home smells like rotten eggs all day long.”

Amy’s observation wouldn’t be surprising given the speculation emerging that the gas company removed an important well casing years before the leak, and that many of the facility’s storage units and pipes are over 50 years old. While engineers still haven’t pinpointed the exact cause of the leak, aging infrastructure could be to blame. The Aliso Canyon Underground Storage Facility has lacked a crucial safety valve since 1979.

Even still, SoCalGas didn’t acknowledge that there was a leak until almost a week after residents approached them.

Due to protests against Gov. Brown and local politicians by environmental groups and residents who feel disrespected and ignored, some action is finally being taken. But both SoCalGas and state politicians and agencies have been incredibly slow in responding to residents, getting them moved to a safe environment, and taking care of the unfolding ecological disaster. Scores of residents and now Los Angeles are in the process of suing SoCalGas.

At the same time that methane gas was pouring out over the Los Angeles area, Gov. Brown was part of the negotiations at the United Nations climate summit known as COP 21–posing as a leader in the fight against climate change. Meanwhile, California is a top producer of natural gas and oil, relying heavily on the environmentally dangerous method of hydraulic fracturing.

The gas leak at the Porter Ranch facility is the tip of the iceberg; Los Angeles has long been considered an active oil field with millions of people living on top of it.

State representatives are calling for more regulation, oversight and yearly inspections of gas storage facilities. But one has to ask why this wasn’t done already, especially if they knew companies were relying on old and outdated infrastructure?

MANMADE DISASTERS like the one at Porter Ranch are endemic to capitalism and will only grow worse in an era when the neoliberal project of austerity has dismantled social services and cut state and federal funding to deal with emergencies.

Alongside the drive for short-term profits, the owners of corporations that are polluting our communities are putting us on a collision course with never-ending ecological disasters. Corporations owned by the 1 Percent don’t want to put money into the safe production of energy or the protection of communities and the environment.

In the midst of this crisis, what else should we be demanding?

The Porter Ranch community should be compensated for relocation of homes and schools, loss of jobs and work hours, and health care expenses now and in the future. Activists are calling for Obama to declare the Porter Ranch gas leak a national disaster so residents can gain access to tax benefits, mortgage relief and federal resources.

People who live in the area (or on top of other gas storage units) should be given access to independent research to figure out the exact level of toxins in the air, as well as the potential for these types of disasters to occur again. Ultimately, natural gas storage units should be shut down and the state should invest immediately in 100 percent clean and renewable energy. Corporations should be taxed and fined to pay for investment in safe, renewable sources of energy like wind, solar and tidal energy.

We should also be asking why money isn’t being put into the infrastructure for renewable energy. Some have described Brown as a leader in fighting climate change and stopping CO2 emissions in the state because he has called for California to use half renewables by 2030–but Brown, along with President Obama, has accepted and pursued the capitalist logic of “all of the above” energy production.

In fact, Brown’s agreement with the expansion of oil and gas fracking in the state has contributed to the unfolding disaster in Porter Ranch. Fracked gas is stored in the Aliso Canyon storage facility, and now community members don’t even know the full extent of the chemicals they have been exposed to as a result of the leak.

Finally, this deadly leak and environmental disaster–in a community where household income averaged over $100,000 a year in 2008–is just one example of how both working-class and middle-class communities are seen as “expendable” in the eyes of the U.S. ruling elite, especially those who own and control gas and oil corporations.

While the situation may seem bleak and scary, the question of ordinary people having collective power in their communities, workplaces and schools to make change is key. It was the organization of grassroots protests by the Porter Ranch community that pressured political leaders and the California energy giants to start to take some action, bringing our attention to the Porter Ranch crisis in the first place.

Going forward, it will be this collective action that will make the difference in whether or not the corporate polluters are allowed to continue wrecking our communities and our planet.