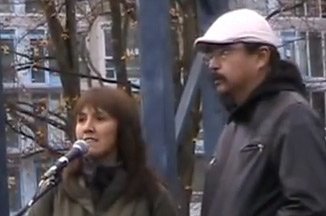 Freda Huson and Toghestiy from the Unist’ot’en Camp speak about the threat of, and resistance to, fracking to thousands of people gathered for the Defend Our Climate — Defend Our Communities rally at Science World in Vancouver. The rally in Vancouver was mainly focused on the Enbridge tar sands bitumen pipeline – which will pass right by the Unist’ot’en Camp if it is ever built. The Unist’ot’en Camp Defenders are dedicated to blocking the Enbridge pipeline if it is approved, but are presently focused on stopping Chevron’s Pacific Trail fracking gas pipeline which is already in the early stages of construction.

Both Freda and Toghestiy emphasize the huge threat to our climate posed by so-called Liquefied Natural Gas export plants, which would be fed by massive fracking operations in Northern BC. Toghestiy also touches on the little known threat of ocean acidification, which is already killing off oysters on Vancouver Island.

The week before this was recorded, typhoon Haiyan struck the Philippines, killing thousands of people and leaving millions homeless. With climate change, weather events like typhoon Haiyan are becoming more frequent and extreme, devastating communities who are losing their homes, family members, and livelihoods.